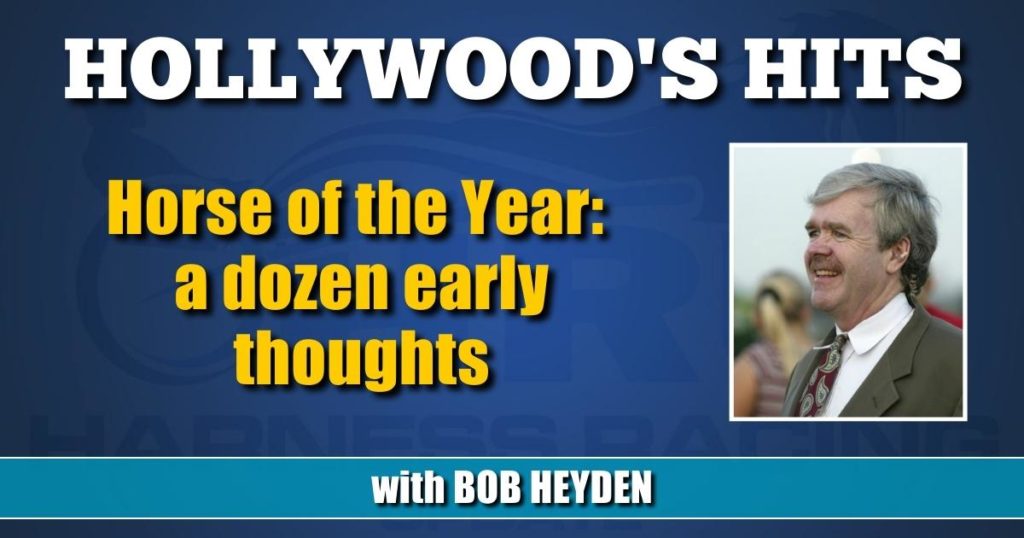 Horse of the Year: a dozen early thoughts

Malabar Man was the first trotter to be HOY averaging over $100,000 per in 1997. But the seven starts are likely not going to work. Chapter Seven at 10 in 2012 holds the mark for the fewest ever for a HOY.

In 1958, 3YO Trotting Filly Emilys Pride got 28 first-place votes and 439 points overall to nail down the title, even though Belle Acton also got 28 first place votes, but 407 points.

David Miller is, well, getting up there — at least comparatively speaking. He will turn 57 on Dec. 10. IF Test Of Faith or Venerable should be named Horse of the Year, Miller would become the oldest driver in 47 years to claim the title. Delvin Miller was 61 with Delmonica Hanover in 1974 when she parlayed the Prix D’Amerique and the Roosevelt International (John Chapman) into a HOY season. Here’s a look at the 50-something drivers since who have done it:

If you look at the top 24 trainers of 2021 in earnings, you will see Brett Pelling at #7. But look a little closer to the right at his .UTRS: .465. It is a beyond-belief Stanley Dancer type of number that is simply not done in today’s era.

Brothers Andrew and Todd McCarthy both surpassed $7.5 million in driver earnings in 2021.

Horseman Rod Allen has retired at age 65. It’s been 17 years since we lost his father, Carl, the patriarch of the Allen family. Rod started driving the year after his dad won the $1.7 million Woodrow Wilson in 1983 with Carls Bird and Rod’s brother Marty was the season’s fastest on three different sized tracks with Its Fritz.

Rod has been around for most of the last three and a half decades — with a memorable 1994-1996 campaigning standout C R Kay Suzie, the 1995 HOY. Carlsbad Cam won the 1992 Meadowlands Pace in Rod’s lone appearance in the Pace, after a third in the NA Cup as the betting choice. C R Renegade won the 1999 Breeders Crown.

If there is a classier duo in the sport that Rod and wife Dawn, I certainly have yet to meet them. All the best to a duo that may not realize it but they have set the bar even higher on how to conduct oneself in the sport of standardbred racing — on and off the track.

The last two times there were four heats in the Hambletonian came in 1975 and 1976. Certainly, you can understand the taxing nature of this. In 1975, the top two finishers never again raced — Bonefish and Yankee Bambino. But, in 1976, just two weeks after the grueling Steve Lobell-won Hambletonian, 10 of the 12 participants in at least three heats made it back and competed in the Colonial on Sept. 18, 14 days later. Steve Lobell actually made breaks in two different heats on Hambletonian Day and still won it.

Who remembers Hambletonian medallions? in 1975, the medallions, along with $5 admission tickets for the race, were sold for $5 each to commemorate the 50th anniversary of the race. The goal was 25,000 sold, but it was topped to 28,535 Golden Hambletonian Medallions.

Where, oh where, have these days gone?

Hold onto your hats. On Feb. 20 1964 at Roosevelt Raceway — Opening Day — 35,191 people showed up (and 22,421 came the next night). For the opener, in 24 degree weather, just two days after a snowstorm, $2,340,342 was jammed through the windows. One hundred and forty-six infra-red heaters were set up for those not lucky enough to make it inside or to the Cloud Casino. My favorite remembrance? Doc Robbins sold all 32,000 programs.