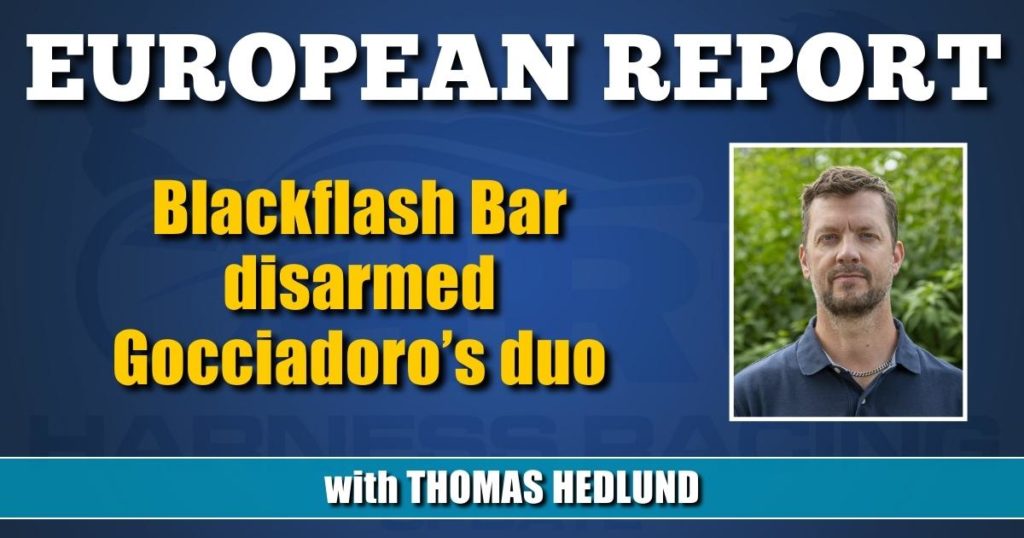 Alessandro Gocciadoro had two top trotters behind the gate when the $370,000 Gran Premio Unione Europea was held in Modena, Italy on Sunday (Nov. 21) afternoon, but neither leader Bepi Bi nor first over trotter Bengurion Jet could defend themselves when Blackflash Bar (Oropuro Jet) attacked from second over paired with driver Santo Mollo.

Blackflash Bar finished strongly over Modena’s home stretch and the Fausto Barelli trained mare claimed the victory in a mile rate of 1:58 over 1.3 miles.

The Italian “B-crop”, the 4-year-olds, is strong, which horses like Bepi Bi and Bengurion Jet proved earlier during the season and Blackflash Bar belongs in the top of the crop as well. She was runner up in last year’s Italian Derby, beaten by Bleff Dipa, and she has claimed three Group 1 wins in her career.

The 2021 edition of the $125,000 Prix de Bretagne, the first out of four ”B-races” ahead of Prix d’Amérique in January, suggested that the two-time winner Face Time Bourbon (Ready Cash) has a huge chance to claim his third consecutive win in one of the world’s greatest races for trotters.

Sébastien Guarato’s 6-year-old was just outstanding in Sunday’s (Nov. 21) race at Vincennes and driver Eric Raffin acted like he had the best horse in the field.

A safe start was followed by a three-wide attack as Vincennes’ track goes downhill after the wire post, with a little less than two kilometers to go in the 2,700 meters long race.

Face Time Bourbon hit the lead shortly after and at that point, the Prix de Bretagne was over, at least regarding who would win. But there were three spots in Prix d’Amérique at stake in the B-races and early leader and runner-up Etonnant, along with Jean-Michel Bazire’s 5-year-old Ganay de Banville, who finished third, secured their spots in the Prix d’Amerique.

Face Time Bourbon more or less jogged his 1:54.4 (mile rate) win over 1.6 miles and it’s hard to see that there are any horses in Europe that can threaten him in his chase for the third consecutive victory in Prix d’Amérique.

Spots secured, so far, for the 2022 Prix d’Amérique

From the Prix de Bretagne: