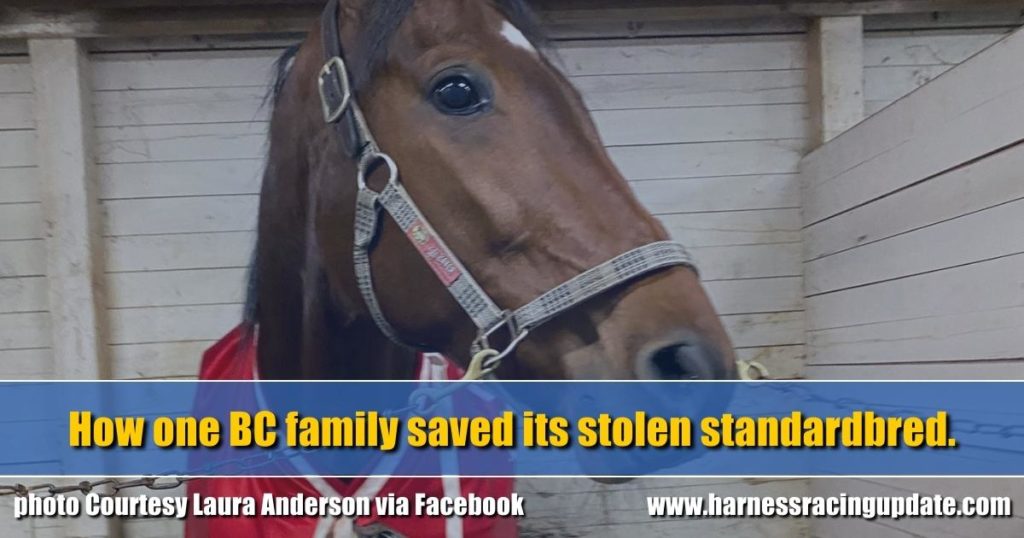 How one BC family saved its stolen standardbred.

“When you get a text [saying] your horse is dead, [and] this text comes in after midnight, you get suspicious,” said Katherine Anderson, who added that she just couldn’t believe the message on her daughter’s phone.

Fortunately for 7-year old pacer Town Speaker (p, 4, 1:54.1f; $101,554 U.S.), stable name Thomas, his owner’s skepticism proved correct. But where was he? The gelding had not raced since July 24, when he finished third for trainer Andrew Baird at The Track on 2. “My daughter was in Alberta and going to see Thomas,” said Anderson, who lives in Pitt Meadows, BC. “We asked for the address and vet’s name. No answer.”

Before going missing, Illinois-bred Town Speaker divided his time between Fraser Downs and Alberta, where he raced at Century Downs and The Track on 2. In November 2020, the gelded son of Well Said debuted for Baird and Anderson at British Columbia’s lone pari-mutuel harness track, finishing fourth. He won two starts later. Despite competing in claiming races, Anderson never planned to part with him.

In March 2021, Town Speaker started his season at Fraser Downs, later moving to Century Downs, where he qualified May 25. He alternated between Alberta tracks until July 24, when he finished third in race 3 at The Track on 2. Then his trail turned concerningly cold.

In her written statement for the RCMP, which she submitted this week, Katherine stated that on Aug. 2, 2021, Baird had called to ask if she would consider selling her gelding for $4,500. When she declined, “he begged [Anderson] to reconsider” and they agreed to a three-month lease for the purpose of helping Baird become a licensed driver.

“During the weeks that followed he gave me regular updates on how well and happy Town Speaker was,” she noted in the letter. “My daughters met Andrew [Baird] at Fraser Downs Wednesday September 22nd. Andrew said to my daughters that TS [Town Speaker] was arriving back to BC on the Saturday 25th of September. Andrew told my daughters what shedrow and stall TS would be in and they could come see him every day if they wanted to.”

Three days later, Katherine’s daughter Laura received the early-morning text from Baird. In Katherine’s written statement, she described Baird’s message, which stated “TS was washed out and never came around and coliced [sic.] and passed away” while turned out in a field. Katherine’s other daughter, Lisa, was visiting Alberta’s Century Mile track, near Edmonton, but was still unable to find an address for Baird’s farm; the trainer’s phone was seemingly always turned off.

In a frantic social media post, Laura said Baird’s text message had raised suspicions because the horse’s “body [was] nowhere to be found and no vet was provided and he will not answer phone calls.” Laura noted that her family discovered Town Speaker had been covertly sold to an Amish buyer, likely destined for road use in the United States. “Thomas is our pet and his lease was up [October] 31 and [he] was being broke to ride [in] November for my nephew,” read her heartfelt Facebook post, which was widely shared on various platforms.

When Katherine’s husband confronted Baird at Fraser Downs, the trainer reportedly told him, “I’m sorry your horse is dead” but refused to elaborate. “Later on Andrew phoned my family and admitted that a man [name withheld] came into Century Downs and was not leaving Century Downs without TS. He threaten[ed] Andrew[‘s] life multiple times and said he wanted the horse and proceeded to remove TS from his stall and onto his trailer and then drove away,” according to Katherine’s account of events. “However Andrew did not know that we had been in touch with [name withheld],” who originally denied the allegations.

The family shared the story of Town Speaker’s disappearance widely, in the hope that it wasn’t too late to find him. Microchipped and freeze-branded, with a small star and above-average height for a standardbred, Thomas might be more recognizable and identifiable than some missing horses.

“I called a friend at the racetrack and asked her to find out the main Amish buyers,” said Katherine, adding that the BC Standardbred Horse Adoption Society’s Greener Pastures Horse Rescue contacted her daughter Laura to confirm their fears: No one had stolen Town Speaker from Baird. A buyer (name withheld due to pending investigation) had reportedly paid Baird and removed the horse from Century Downs in a trailer July 29, without providing identification to track security. The gelding was subsequently sold to an Ontario buyer, who had a veterinarian perform bloodwork and other health checks for transport across the Canada-U.S. border. Town Speaker was eventually located in an upstate New York Amish community, but only after the Andersons managed to untangle the lies that had illegally relocated their horse from one coast to another.

Katherine said it wasn’t clear if her pacer’s freeze brand or microchip helped bring him home: “Yes and no, as nobody bothered to check or ask for paperwork.” She gave greater credit to “local standardbred and social media,” who shared the family’s message widely when Thomas went missing: “We have a lot of horsepeople we asked for help to locate him.”

Town Speaker arrived home in BC late last week, “doing ok, but has a lot of scratches and marks,” she told HRU. “He was very happy to come home.”

The first-time standardbred owner admitted she was frustrated with the injustice of the situation, “having to pay to get my horse back and the two people that stole him paid nothing.” Urgency did not allow for economy in rescuing Town Speaker; she was advised to bring him back to Canada before filing formal charges against the individuals who sold him. In her statement to the RCMP, Katherine wrote, “I assume they thought that my family and I were just to accept the fact that our horse had died and that this would all go away.”

Since Oct. 2, Andrew Baird has been subject to full suspension and a loss of grounds privileges at Fraser Downs, pending the outcome of a BC Gaming Policy and Enforcement Branch Racing Division investigation.