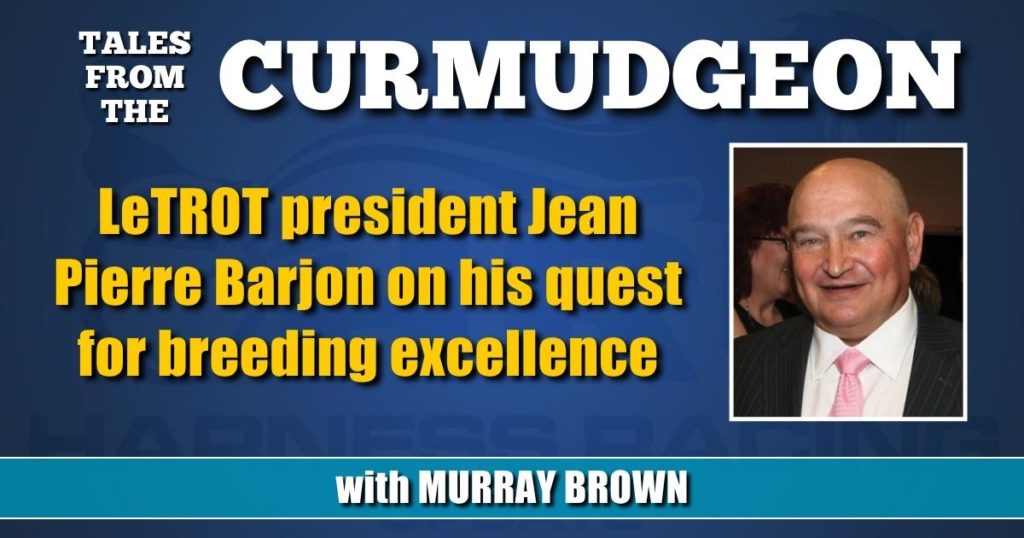 The man who spent $1.4 million in Harrisburg and $260,000 in Lexington on U.S. stock is convinced the next trotting champions will come from breeding American horses to French ones.

A relatively new name made its appearance among the major buyers at the yearling sales this year in Lexington and Harrisburg and especially at the Harrisburg Mixed Sale. His name is Jean Pierre Barjon, but his name should not be all that new to students of worldwide trotting.

Barjon first made his name known in American sales when he purchased the mare Graceful Touch at one of the Perretti Farms dispersals in 2011 for $560,000. In addition, he was the owner of the 2009 Prix d’Amerique winner Meaulnes du Carta and has been the president of the powerful French Trotting organization LeTROT. Thanks to the cooperation of Monsieur Barjon himself and with the help of Steve Stewart and Monsieur’s Barjon’s associate and pedigree advisor Claude Guegan, I was able to connect with him.

Guegan, interestingly enough has some United States harness racing experience. He worked with David Reid at Preferred Equine Marketing while in the United States.

Please tell us about yourself? What is your background in the sport? How long have you been involved?

“I am the owner of Meaulnes du Carta, winner of the Grand Prix d’Amerique in 2009. I became a breeder in 2006. Since then, I have been the breeder of four Group One winners. As an owner, I have won 17 Group One races including the Grand Prix d’Amerique, the Cornulier (twice) and the Italian Derby. I sold my primary business in the beverage industry three years ago. In addition to my multiple horse holdings, I am presently and have been the president of the LeTROT Society in France since 2020.”

You are one of the few French horsemen — others notably being my friend Jean Pierre Dubois and his family — who have made a significant investment in American trotting. What initially most motivated you in doing so?

“I seek, first and foremost, excellence and victories in the greatest international races throughout the world. I am convinced of the success of cross-breeding between United States and French bloodlines. History is showing it to be so. It will become even more successful, the more it is practiced.”

The majority of your American purchases thus far appear to be primarily focused on the breeding aspect of the sport. If your primary focus is as a breeder, do you envision becoming a market breeder with the possibility of raising yearlings for the marketplace? Do you intend to race here? If so, who will be your trainer?

What is your main motivation in investing in American trotting?

“Breeding in the United States is part of my overall strategy. I have helped in exporting several trotting mares to your country by France’s greatest stallion Ready Cash. The performance, thus far, from those mares is very promising. Already a Ready Cash mare when bred to an American stallion has produced Cuatro de Julio, one of the top 3-year-old trotters of this year. This encourages us to believe that this will turn out to become a great strategy.”

How many horses do you presently own? Where are they located? It is my understanding that you race throughout Europe. Do you prefer racing to breeding?

“I look upon breeding and racing as two separate areas with one common goal — that goal is excellence, leading to greatness as evidenced by winning major events on racetracks throughout the world. My preference is in winning in either and preferably in both arenas. I am convinced that you need to breed at a high level in order to win races of a high caliber. I now own 40 broodmares. They are comprised of 25 French trotters and 15 Standardbreds. I own a total of 150 horses. The majority of them are in France. There are others in Sweden, Italy and the United States.”

Do you envision other people from France following your lead?

“I hope so. I myself have followed the experience and wisdom of Jean Pierre Dubois, his family members and Philippe Allaire. I am convinced that others will follow. I believe that more French trotters will be born in the United States, thanks to the agreements made in 2014. These horses will then have the capabilities of racing in North America, throughout Europe and in France.”

Will you be breeding some of your French trotting mares to American stallions and conversely your American mares to French stallions?

“I am a great believer in cross-breeding Ready Cash daughters to top American stallions. Its looking to already being incredibly successful and we’ve only touched the surface. We’ve only done it with a small number thus far. As the numbers increase, so will the successes. I think these crosses will be interesting in both directions.”

To some degree, because of your strong investments internationally, there has been some speculation that perhaps that together with your status in French trotting that the French studbook might be on the verge of opening again as has periodically happened in the last century. Do you consider this to be a likelihood or even a possibility?

“To date, no decision has been taken, even if some breeders are wondering (perhaps with nostalgia) about the origins of today’s great champions such as Face Time Bourbon, Bold Eagle, Ready Cash, Love You, Coktail Jet and others.”

You are the President of LeTROT in France. Please tell our readership about its functions and importance.

“LeTROT is a very big organization in France. In association with France Galop, it administers 3,500 people including the PMU (9 billion Euro annual handle). LeTROT also manages more than 11,000 races a year at 215 racetracks and distributes more than 225 million euros in purse money and nearly 26 million Euros in premiums to breeders.”

Some Americans, perhaps most notably the Antonacci family have dabbled a little in breeding their mares to French stallions such as Love You and Ready Cash in recent years. I realize that Ready Cash has been a super sire in France, throughout Europe and perhaps the world. Do you see his blood and perhaps that of Love You (through International Moni) or any others becoming a large influence on American trotting?

“For me it is a conviction. I believe it to be inevitable. These stallions themselves come from crosses with American blood — close up through Cocktail Jet and Viking’s Way and further away through others such as Stars Pride.”

I’ll end these questions with a sacrilegious question. Do you see any possibility of ever buying or becoming involved with a pacer?

“No. I have never even thought about it. I need to stay focused on my goals.”