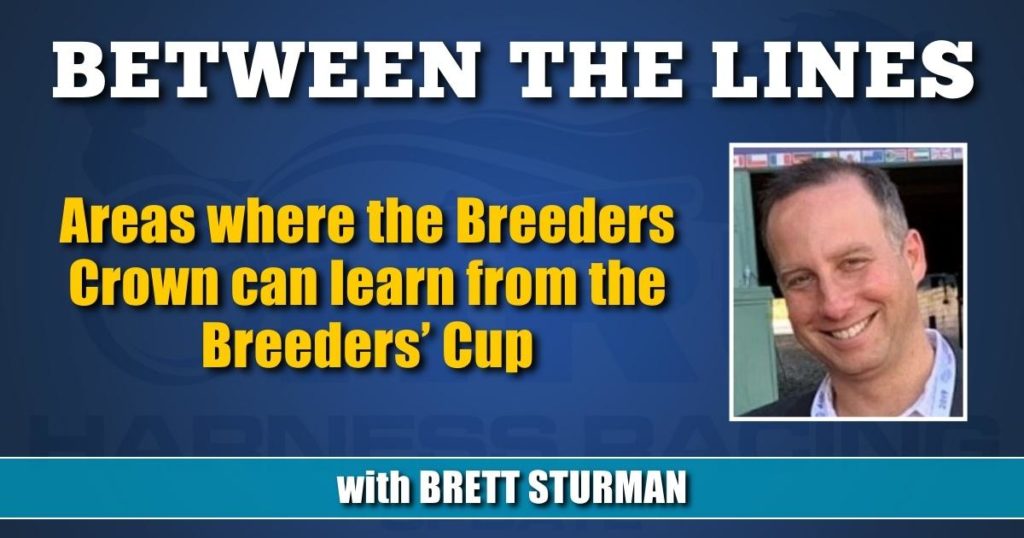 Two weeks ago, the Breeders Crown was conducted at the Meadowlands and by relative industry standards, the two-day event conducted over Friday and Saturday was successful. There were plenty of feel-good story stories amongst the 12 divisional winners and handle easily surpassed numbers from all recent Breeders Crowns, the latter accomplished despite a late September announcement which changed Saturday’s races from night to the afternoon.

With that said, there’s still much left to be desired. In stark contrast to the prior week’s Breeders Crown, the thoroughbreds competed in the Breeders’ Cup World Championships this past Friday and Saturday. Different industries of different magnitudes for sure, but the Breeders’ Cup event offered glimpses into what harness racing can – and should – strive to be. Here are some of those key areas.

Wagering: $182,908,309 was the two-day handle for the Breeders’ Cup conducted at the Del Mar Thoroughbred Club in California. That’s an astonishingly high figure that was good enough for the all-time Breeders’ Cup handle and puts into perspective the popularity difference in the industries when compared to the two-day Breeders Crown handle at the Meadowlands of $7,372,476.

The interesting thing is that it’s really in the wagering where you see by far, the widest disparity between the two breeds. Many other metrics are somewhat comparable. For example, the average yearling price from the yearling portion of the Harrisburg sale this week was $54,653. The September Keeneland Sale – essentially the thoroughbred equivalent sale – the average yearling price was $131,737. Yes, the thoroughbred yearlings averaged almost twice the amount of the standardbred yearlings, but that’s nothing like the 26 times increase in wagering. Even from an earnings potential, an ordinary thoroughbred won’t earn an amount dramatically different from a typical harness horse. So, why the massive difference in wagering?

From a wagering standpoint, appeal in the Breeders Cup’ is that there’s almost always the possibility of a life changing score. This year, the Pick-6 concluding with the Breeders’ Cup Classic, paid $513,085, over a half-million dollars. And that’s not an uncommon payout either; there’ve been multiple instances over the year’s where the Pick-6 has paid out well more than $1 million. Harness racing can’t compete with that, but at least an effort could be made.

As I wrote a couple of weeks ago, there was no concerted effort made in the Breeders Crown to incentivize handle. Nothing unique or special whatsoever was made in the way of guarantees in the Pick-x races; all standard guarantees that you’d see any other day of the year applied. The Breeders’ Cup doesn’t need to bother with pool guarantees, because there’s already an implied guarantee that if you win these horizontal wagers, you’re going to win a ton of money. But it seemed odd that more wasn’t done to promote wagering in the Breeders Crown. A more aggressive (even still safe) guarantee might have helped move the needle on handle. Or better yet, instead of a never-in-doubt $50,000 guarantee, why not seed the pool with $50,000 in free money. Who knows, maybe the handle would have increased an additional few hundred thousand by doing so. I know that wagering is often overlooked, but a Breeders Crown that generates more interest in wagering will generate more interest overall.

Attendance: Despite all-time handle records at the Breeders’ Cup, attendance of over 47,000 at Del Mar was down over 30 per cent from the other time they hosted the event in 2017. It shows that onsite attendance isn’t everything, especially today, but the optics of lack of attendance at the Breeders Crown is a killer. And I say that as an enthusiast who would love nothing more than there to be large crowds to accompany the Breeders Crown races.

Video taken from the apron from Friday night’s 2-year-old Breeders Crown races showed no people. Even if you toss that entirely due to the inclement weather, the visuals from Saturday – a dry and pleasant fall afternoon – were only marginally better. I wasn’t there in person (hypocritical of me, I suppose), but photos circulating on social media throughout that day showed attendance to be sparse. What’s the reason for that?

I’m sure for an owner or for the connections to a winning horse it’s all the same, but in sports, crowds are synonymous with excitement. The Breeders Crown conducted in front of limited fans had the same effect that sports had last year when playing in empty arenas. It’s just not the same. Now, there were a far more respectable number of fans at this year’s Hambletonian at the Meadowlands, so maybe it had to do with the time of year where people are more likely to come to the track on a summer afternoon than a colder one. But whatever the case, horsepeople racing against each other for millions of dollars in purses but not many others there to see it in person takes away from the excitement. The screaming and roar of the crowd should be something that adds a thrill to the Breeders Crown, just as it does with the Breeders’ Cup.

International competition: By the end of October in harness racing, many divisions have seen the same horses go against each other since May. The Breeders Crown just reflects the latest go-around of the same groups of horse’s week in and week out that are racing against each other for the ninth time this year. What could add a different element to the Breeders Crown races is to make it more of a “world championship,” just like the Breeders’ Cup.

What makes the Yonkers International Trot the race that it is, is the international composition. Having trotters most recently in 2019 from the U.S., France, Sweden, Norway, Italy, and other countries compete against each other is always compelling. It generates a ton of buzz, both domestically and internationally. There’s always fascinating backgrounds whenever international horses come here, and it changes up the typical landscape. Ecurie D was an international winner this year and Bold Eagle attracted huge attention leading up to his Breeders Crown win in 2019.

Yes, the Breeders Crown has long made a concerted effort to try to attract European horses, but perhaps there’s something to be learned from the thoroughbreds on how and why their horses seem to travel the globe more easily to compete in stakes races.

Innovation: The Breeders Crown should be used as races to show off the latest in in-race technology. In the Breeders’ Cup, one of the most viral videos was that of a jockey cam from a turf race where a horse weaved through traffic in the stretch to find narrow holes and win. Harness racing does have some neat features including a Mic’d Up segment that Woodbine Mohawk does (and the Meadowlands is now adopting) where drivers commentate during their races, but these are videos often played back at later dates. Having something to immediately show following the completion of the race from never-before-seen angles would enhance the viewing experience in the sports biggest days such as the Breeders Crown.

Tradition: This last one may be more of a personal pet peeve than anything, but it’s confusing when in the Breeders Crown and other select stakes races when drivers wear the colors of a small group of owners, many of which have thoroughbred interests where that practice is universal. I know the argument that as an owner it should be their prerogative to have a driver wear their colors like they do in thoroughbreds, but in harness racing you follow the races by the drivers and their colors, and it’s that much harder to do when colors are changed in stakes races on days like the Breeders Crown.