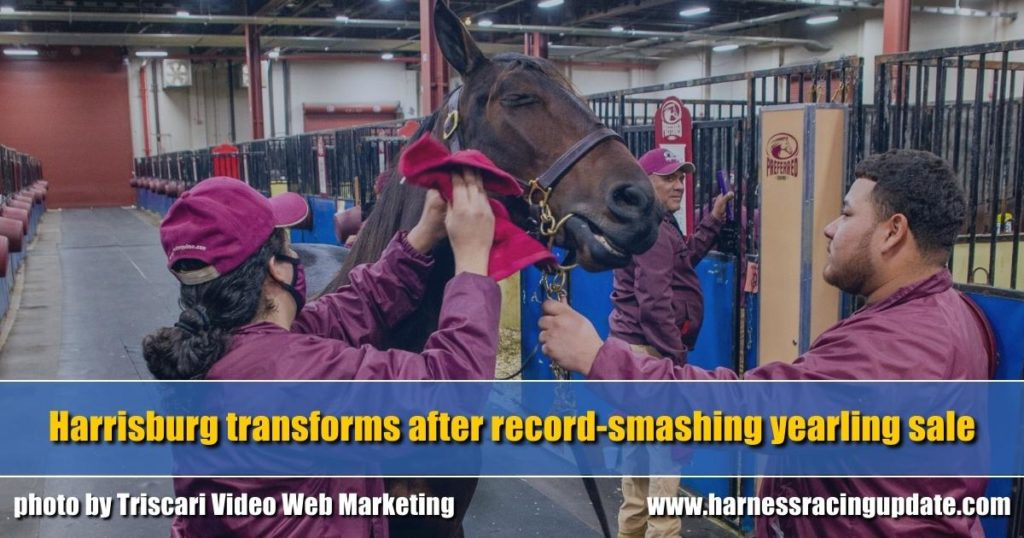 By about 4 p.m. Wednesday (Nov. 10), the signs at the Hanover Shoe Farms consignment in the Main Hall started to come down. Blue Chip Bloodstock and other consignments cleared shop by the end of the day while semi-truck loads of horses parked at dusk with their bulbs of blue, yellow and white shining bright outside the loading zone of the Farm Show Complex. Even amid the yearlings sprawling from the West Hall fences before going around the ring during the day, horse traffic increased through the facility as the Standardbred Horse Sale Company (SHSC) began to work on a transformation miracle.

The powers that be have sparse time to ruminate over the days that passed with the Pennsylvania Farm Show Complex (PFSC) transforming from its yearling-based layout to its distinct setup for the Mixed Sale, which begins at 10 a.m. today (Nov. 11).

Triscari Video Web Marketing The bidding was brisk this year. The yearling sale set a record for average and median.

“We’ll do the curtain and the decoration, getting it all together and switched over for the other consignors,” said SHSC president and director of operations Dale Welk, who joined much of his staff on the floor of the PFSC in readying the building for today. “We have to change all the curtains out and put new curtains up, so that’s what we’re working on now. Actually, my crew is out having a bite to eat for dinner and then they’ll all be down and we’ll get it knocked out in the next few hours.”

“The overall sale was just wonderful,” Welk said as more broodmares strode through the Main Hall towards their stalls. “It’s amazing and I can’t thank the buyers, bidders and consignors and everyone enough. It was just an amazing sale – we’re over $40 million.”

Presumably, Welk, off the record-breaking day, finally had a chance to have dinner.

“I had a couple [E L Titans] this year that I liked a lot – really good-gaited horses,” Kelley said. “This filly here, I thought she was just an exceptional individual. She’s got just a tremendous head on her, beautiful shoulder, tremendous top line, big hind end and plenty of leg… it’s a really nice, young family, so I’m really excited about that. So, really, really excited to have her in the barn.

“I didn’t think we could get her for less than $100,000. I figured it was going to go in that range, probably $150,000 or somewhere in that range. I think she’s well worth it. We’ll have partners on that filly and looking forward to getting her started and hoping for the best.”

Only two other horses on the day broke six digits, doing so by the bare amount and just a few minutes apart from each other. First, the husband-wife team of Shane and Lauren Tritton acquired Hip 784, a Huntsville colt named Duck Dynasty bred by Blair and Erna Corbeil and consigned with Blue Chip Farms. He left the arena for $100,000.

“We loved this horse from the moment Shane and I laid eyes on him at a private inspection at Blue Chip Farms,” Lauren Tritton said. “We saw him trot in the field and his movement is unbelievable. The way he covers the ground is on the smaller side, but he is built like an army tank. He’s also a New York bred, which is outstanding for us to race at Yonkers. His price was expected. I think his videos and presence were hard to ignore.”

Tritton also said that they purchased the colt, who is the first foal from the Rock N Roll Heaven mare Rockn Opium, for Steve Heimbecker of Waterloo, ON.

Kickoff for the Mixed Sale begins today with a small section of yearlings and weanlings before a day of stallion shares and broodmares takes center stage. A large portion of the Mixed Sale – both today and Friday – operates out of the Preferred Equine consignment, which has over 200 horses to sell through the two days.

A portion of the broodmares today will sell out of farm dispersals. Preferred Equine consigns the one dispersal of 10 mares from Warrawee Farms, but the other dispersal comes from Herb Liverman’s broodmare band. Peninsula Farm consigns the eight-mare section which includes the world-champion Glidemaster mare Maven (4, 1:51.4h; $1,997,809).