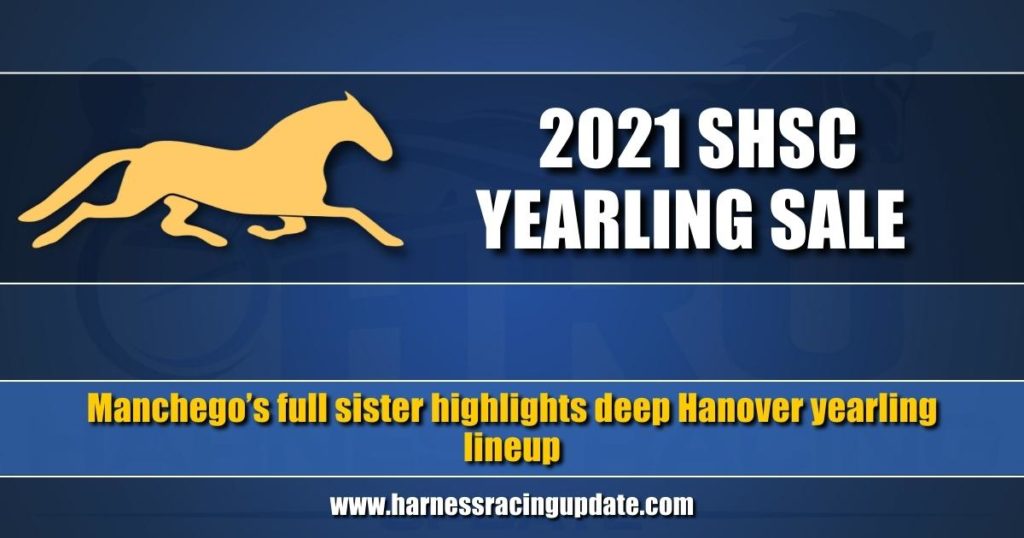 Dr. Bridgette Jablonsky is as important a resource as exists when it comes to evaluating the yearling lineup of the sport’s perennial leading breeder, Hanover Shoe Farms.

For those that haven’t had the opportunity to consult Jablonsky directly about the farm’s yearling consignment at the Standardbred Horse Sale Company auction — which begins Monday (Nov. 8) — we brought Hanover’s esteemed executive vice-president and syndicate manager to you.

Hanover is selling some 200 yearlings in Harrisburg and Jablonsky breaks down some of the more notable ones.

“The highlight of our consignment for sure, is the full sister to Manchego” Hip 118 Swanky Hanover,” Jablonsky said.

“We didn’t sell Manchego and I didn’t see her as a yearling, but I’m told this filly is bigger than she was a yearling and has more substance to her, and maybe a little bit more correct than her. That’s not to say that she’s going to be better than Manchego, but the parts are there. Again, she’s dual eligible. She has a good video, but when we turn her out in the paddock now for people she’s much better than the video. Even her athleticism has gotten better over the last six weeks or so. She’s definitely a filly that went from being a baby when she came in to now being more of an adolescent yearling. She’s well on her way to being a racehorse now.”

As for other yearlings, Jablonsky had a list of top prospects, which is as follows:

Hip 4 Try-hard Hanover — “is the full brother to Temporal Hanover, so, of course, a Walner colt. My opinion is that he’s a nicer yearling than Temporal was – tall, very leggy, correct colt. Of course, Walner is all the rage, as he should be. He’s our first horse selling and I think we’re going to start off with a very nice one.”

Hip 6 Tickertape Hanover — “is our only Huntsville colt and, of course, Huntsville has had a great year in his own right. This is a gorgeous colt, one of my favorite pacing colts, great video, great family.”

Hip 21 Admiral Hanover — “is a Captain colt out of American Jewel, so you can’t get much better bred than him. He’s a big, strong and very nice colt.”

Hip 22 Apropos Hanover — “is another first-crop Stay Hungry, brother to Allywag. He’s a nice colt and has a great video.”

Hip 24 April Hanover — “is a beautiful Walner filly from the family of Andover Hall.”

Hip 26 Amsterdam Hanover — “is a first-crop International Moni, sister to Anoka Hanover, with a great video.”

Hip 44 Dahlquist Hanover — “is another very nice Walner colt from the family of Andover Hall, out of a mare that was very good at 2 named Dangle Then Deke. He’s a very strong colt.”

Hip 59 Frou Frou Hanover — “is my favorite pacing filly. She’s a Captaintreacherous, dual-eligible filly, sister to Bettors Up. She’s beautiful, she has a good video. To me, she’s every bit as nice… as the one that sold for $400,000 that we sold (in Lexington – Bellisima Hanover). She’s dual-eligible and she’s the sister to a mare that made a million dollars.”

Hip 90 Muskateer Hanover — “is a gorgeous pacing colt. He’s a Sweet Lou and the first colt from a mare that’s been a really good producer of fillies. To me, that’s sometimes a big angle, when you have a mare that’s had a couple of good fillies in a row, really good fillies in a row, then her first colt can often be a home-run horse and he really looks the part because he’s as flashy as anything and he has a great video. He’s one of our better pacing colts, I would say.”

Hip 105 Panettone Hanover — “is a three-quarter brother to Papi Rob (Hanover). He’s a little bit immature looking right now. He’s going to look like a much more mature horse in a couple of months, but he’s got the size, he’s got the frame, he’s got the conformation… He’s a May 14 foal and he just needs to grow into himself a little bit. Again, he has a great video.”

Hip 119 Solidad Hanover — “is the first foal out of a sister to Manchego… and one of the last Kadabra fillies that we’ll see. So, certainly the pedigree is very, very intriguing. She’s a nice filly. She’s a May 27th, so she’s also a late foal, but a mature-looking late foal.”

Hip 345 Mint Julep Hanover — “is an absolutely gorgeous filly and she’s the sister to a mare that we have, Marinade Hanover, who is selling one of the colts I mentioned previously. She’s a first-crop Stay Hungry. I rate all of the yearlings one to 10 based on conformation and I start my ratings when they are born. They get their last rating like two weeks before they sell. It’s hard for me to give 10s. It’s this psychological block that’s in my mind that nothing is perfect – horses aren’t perfect — so I just can’t write the 10s, you know? But if I forced myself to write the 10, I’d give her a 10 because she’s as close to perfection as I’ve seen in a horse. I’ve given some 10s, but she’s like a nine-and-three-quarters. She’s beautiful. She’s definitely one that if you haven’t gotten a top pacing filly prior to her, you know… you’re taking a chance with Stay Hungry, but all indications are he could be a top stallion. Somebeachsomewhere hasn’t missed yet with his sons. She is the 12th foal, which I know is not ideal for some people, but if you haven’t gotten a top pacing filly yet, you should come look at her because she looks like what a top pacing filly looks like. She’s beautiful. She’s my highlight of Tuesday.”

“I’m not sure (Sublime Hanover is) going to be a value pick, but she is a Sportswriter sister to Scarlett Hanover and I love the filly. Somebody called her dainty yesterday and I don’t know if I would call her dainty, but she’s certainly a very feminine-looking filly. You might wish there was a little bit more to her. Scarlett was very plain. She’s not plain, but Scarlett had more bone and stuff… I don’t know if she’s going to be a value pick, but she might not sell for what she’s really worth because she’s late in the sale and she’s not the biggest filly in the world.”

Finnian Hanover is a “really good-looking” Rockin Image colt. “He would definitely be a value horse. Similar situation last year when we sold Dalby Hanover, a Rockin Image colt (for $15,000)… He won the final of the Indiana Sires Stakes this year as a 2-year-old and I loved him. I think both of those colts fit that bill. They are both gorgeous horses.”