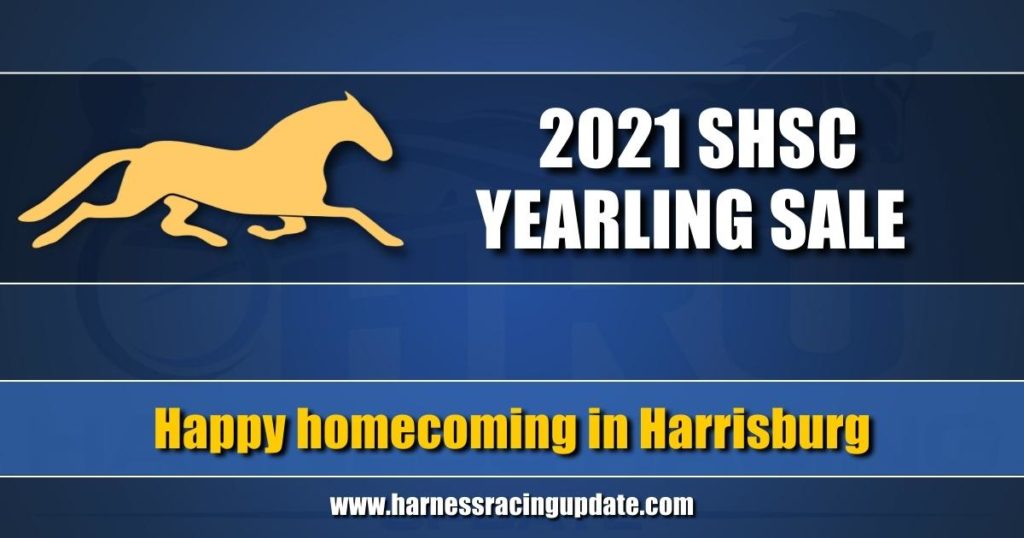 After COVID-19 restrictions forced the Standardbred Horse Sales Company to move to Timonium, MD in 2020, many are saying they will never again complain about the sale’s traditional home in the Pennsylvania Farm Show Complex.

A year after COVID-19 restrictions closed the Pennsylvania Farm Show Complex (PFSC) in Harrisburg, PA and forced the Standardbred Horse Sales Company (SHSC) to find a temporary home in Timonium, MD, many are happy to return this year to the sale’s long-time home at the PFSC. The sale begins Monday (Nov. 8) and runs through Friday (Nov. 12).

All interviewed said the facility in Maryland was the next best possible venue given the circumstances, but the fact the barns are outside and open to the elements posed problems, including the collapse of a tent over part of the Winbak and Northwood consignments (full story here).

“The facility where we were was excellent – the barn, the stabling. We had fantastic stalls. Being outside, you’re at the mercy of the weather and I think it was the tail end of a hurricane down there for the first couple of days last year,” said Twinbrook Farm’s Tammy McNiven.

Asked if she was happy to be back at Harrisburg, McNiven laughed and said, “Oh, you have no idea.”

Preferred Equine’s David Reid said the sale company found the next best venue to PFSC last year, but, unfortunately, the weather did not cooperate.

“Timonium is a proven place where they have successful auctions. It was a city where you could get into and out of easy enough. They had stabling there for as many permanent stalls as they could possibly find. It was unfortunate the weather-related issues that they had, but I think for the buyers and the sellers in November being under one roof is advantageous. I think people are generally happy to be back to Harrisburg for that reason,” Reid said.

Spring Haven’s Senena Esty said she is, “thrilled to be back at Harrisburg… and a lot of people, I think, will say the same.”

Steve Stewart of Hunterton Farm is one of them.

“We’ve all joked about the fact that, ‘Oh, God, we’ve got to go back there to the dungeon’ that everybody complained about for 40 years,” Stewart said of PFSC. “Now, after not being able to be there, we were out in the cold and the wind was blowing and knocking tents down. It was very eye opening that it’s nice to not have to be outside this time of the year.”

“In trading, uncertainty stinks and everyone knows what Harrisburg is. We know where we’re going… I’m happy. You just know what you’re getting,” Grossman said.

All American’s Rob Tribbett agreed, especially after a difficult couple of pandemic years.

“I think familiarity is always a good thing for everyone, so being familiar with the venue, it just feels like we’re getting back to normal. I didn’t really mind Timonium. The weather didn’t really do us any favors, but most buyers and sellers will be glad to be back at Harrisburg,” Tribbett said.

For Jablonsky, the PFSC just makes it easier to manage Hanover’s consignment of some 200 yearlings.

“Our consignment is so big that I had a hard time keeping tabs on it. Last year, we had two-and-a-half really long barns and I couldn’t see what was going on at the other end of the barn… I missed who was looking at what. I missed some people entirely, I think, looking at yearlings,” Jablonsky said.

“At Harrisburg, I have my spot. On Sunday, I’m around the hospitality area and people know where to find me. I get a good feel of who is looking at what. During the sale, I sit where the horses enter the back ring and I feel like I see everyone at least once. Everyone passes me at least once, so I think the fact that Harrisburg is under a roof… it is very easy to look at horses at Harrisburg. If you had to look at a horse last-minute, it’s pretty simple to get to them. So, I’m happy to be back. I think Timonium was the best second option last year and they made the best out of a difficult situation, but I’m very happy to be back.

Along with the return to its old familiar home, the SHSC has something new this year in terms of the person at the helm. Dale Welk, the sale’s long-time operations manager, is now the new president of the sale company taking over for Dr. Pete Spears.

“Pete Spears shaped the modern configuration of the company and positioned us for great achievements in the near and far term,” Williams said in a release. “We owe him a debt of gratitude.

As for Welk, Williams said, “Few people know as much as Dale about running a horse sale, and he is liked and respected by all.”

After a record-breaking Lexington Selected Yearling Sale in early-October, most believe that momentum will carry through to Harrisburg.

“I’m always so worried to say that I’m optimistic because I said I was optimistic one year and things didn’t go well, but Lexington is usually a barometer of how Harrisburg will go and Lexington was just through the roof,” Jablonsky said. “We were there (selling) this year and it was just magical. I mean, that word might seem a little cuckoo, but, the pacing filly market? I’ve never seen anything like that… It was wonderful to see how well they sold.”

“The traffic in the fairgrounds has been great… We’ve been busy every day. I just want to thank everyone that made the effort to travel to Hanover to look at the yearlings and I hope they enjoyed the day. I wish everyone the best of luck next week and if I can help them with anything, they can just let me know. I hope everyone gets the chance to get something that they want,” she said.

“I think we’re seeing that in the racehorse market… then the betting numbers for the Breeders Crown were really good. Keeneland just had a record meet. There’s a lot of positive signs. We talked before about it in a lot of jurisdictions and it’s a strength – we’re not just relying on a New York or a Pennsylvania or an Ontario. Really, almost everywhere is strong.”

Reid agreed that there’s strength in the market due to the so many jurisdictions offering strong breeding programs today.

“I think there’s a lot of energy in the air and a lot of desire to own horses and I don’t see anything changing in that environment since Kentucky, so I expect the market to hold steady and… I don’t see any reason why anything would change.

“I expect a good market (at Harrisburg). I think there will be good Canadian participation. I’m sure the online presence will be active and I’m looking forward to having a good week.”

As for outside economic indicators, Grossman said not much has changed since he discussed the topic prior to the Lexington sale (full story here).

“I don’t think much has changed since the last time we spoke,” Grossman said. “There’s asset price inflation everywhere in the economy. You see it in stock market, home prices et cetera… a little bit like housing, this is a weird industry where it takes a long time for supply to catch up to demand. Obviously, we’re selling horses that we bred three years ago in a very different environment… so, the textbook says that demand is up and the supply is sort of static, so prices are going to be good. That’s what we’ve seen everywhere else and I don’t think it should be any different for yearlings.

“For those that have wealth, the economy is definitely better… again, that’s a long-term problem, but a short-term good for us.”

Grossman said having so many strong jurisdictions is, “extremely valuable. Again, it’s supply and demand. There’s more purse money and the same number of horses. Also, there’s more options on where to race and less expensive racing, in that… we’ve seen that it’s less about Grand Circuit and people’s staking bills, in general, are going down. So, the return on a yearling that makes $300,000 in Sires Stakes races versus one that makes it on the Grand Circuit is very different because we’ve all paid giant staking fees forever, and we’ll continue to, but those extra jurisdictions just add to the return of buying a yearling, in my opinion.”

Diamond Creek vice-president Shaun Laungani said he expects “another fireworks show” because “people are still looking for horses that they got shut out on. Everybody is excited to get in there and spend some money.”

Esty is a little less optimistic just based on what she’s seeing in the economy overall.

“I’m a glass is half full kind of girl, so I think as a breeder I have to be an optimistic person. We’re looking for big things realizing the economy has taken a turn. But I think the folks that are in this business, they know what money they have to spend. So, I think a good horse will absolutely sell well,” she said. “I think, personally, (the sale) is going to take a little bit of a hit even though I’m optimistic. Reality, gas prices alone, etc., is maybe going to make people a little bit more conservative. It may make someone scratch their head a little bit before making that last bid. We may see a little more conservative approach.”

But Stewart said what may trump everything is purses.

“Everything is still very strong,” Stewart said. There will always be outside influences, but I think they are the same as in Lexington. The one thing that I harped on in Lexington is, all you have to do is look at the USTA website and see North American purses this year versus last year. I think it’s up $120 some million in purses in the United States over last year. Obviously, it’s because of COVID and the shutdowns (in 2020). But, in my opinion, the standardbred business is a very simple business: money in, money out. If there is more money in purses, it drives our business. This year I think we’re being rewarded for sticking it out. I think the outside forces in the last five weeks are no different than five weeks ago.”

with files from James Platz