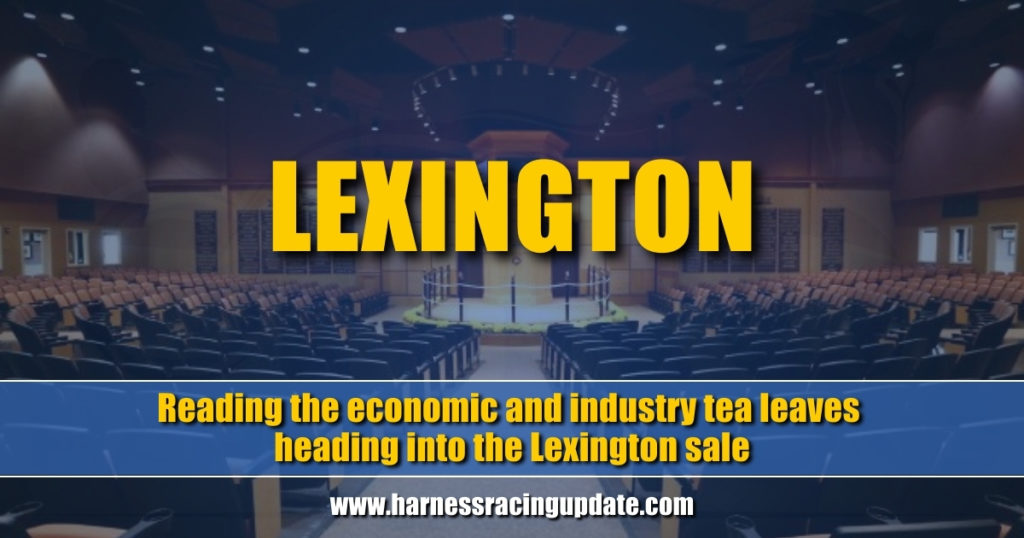 Industry experts opine about global financial conditions and the state of the horse business as the Lexington Selected Yearling Sale is set to begin on Tuesday night.

Despite the world still being in the grips of the COVID-19 pandemic, industry insiders that are experts in finance believe conditions are ripe for another strong edition of the Lexington Selected Yearling Sale.

“I think financially, believe it or not, everything is on an unbelievably good keel,” Blue Chip Farms owner Tom Grossman said of the financial markets. “I think the market has already accepted that there’s going to be some inflation, which is good in a way… not necessarily good for the breeding business, but I think the market has digested a lot of the potential normalization or ‘bad news’ on the margin. The truth is, the ugly truth and the long-term problem, is that those with disposable income have never been wealthier.

“Now, that’s going to lead to social problems for our children… (but) there’s no doubt that people with disposable income going into this have never been better off. Interest rates are still extremely low.

“I’m constantly shocked about how little people talk about the tax advantages of buying horses. I saw something on Facebook the other day where they said, ‘Oh, in the ‘80s when there were great tax breaks for horses…’ The tax advantages for buying and racing horses right now are tremendous with the depreciation laws the way they are. That makes it a very skewed risk-reward return for someone with disposable income to buy horses. I’ve had several people that are not dedicated horsepeople, you know, more on the tax angle than anything else, say ‘Yeah, that’s a good risk-reward bet.’”

Winbak Farms owner Joe Thomson is the founder and president of Pacer Financial. He said not only are interest rates low and “money is cheap” he believes there’s pent up demand to spend disposable income on luxury goods such as horses.

“I think you’ll see a lot of buying and selling. It seems like people have been caged up a bit with this whole COVID thing and they just want to have more positive vibes and take advantage of it… There’s a lot of people that want to buy cars and I think the same thing is going to apply to the horse business,” Thomson said.

“I don’t see bad things in the horse business and I think this is going to be a good sale.”

Thomson said he monitors the stock market daily and said it has seen exponential growth in a short period of time, despite the pandemic.

“If you go back to four or five years ago, the market was 18.5 and now it’s up to 34. So, as long as you had a boat to float, you were in pretty good shape,” Thomson said. “It continues to do well, but there’s so many things going on and so much uncertainty that there’s a bit of a lack of confidence. There’s still a tonne of cash sitting on the sideline. We’ve had our best year we’ve ever had (at Pacer Financial)… and we’ve really just been in our own ETFs (Exchange Traded Funds) since 2015 or so. This is our best year ever.

“We have been confident enough that our company has gone from hardly any employees to we’re up to about 115 people here and we’ve got people all over the country. We’ve got 40-some ETFs that we market and it just seems like if you’re targeted with the right strategy in particular markets, or for particular people, everybody seems to be going in a little bit different directions, you can do very well.

“I think the horse business is sort of like that. There’s a lot of money out there and provided that you’ve got the things that they think they can do well with, then you’ll do okay.”

“The Canadian dollar is up so much that I think we’re going to get somewhat of a boost out of that,” Zubrod said. “I think it’s going to be a good sale. I don’t know about the European mix, I get conflicting reports saying so-and-so isn’t coming and ‘if he’s not coming, he’s not buying’ and stuff like that. We just have to wait and see.

“Overall, I see people pretty enthused up there about the business still. You don’t see many people crying about it.”

The old adage that great yearling prospects will always sell well seemed to bear out for the 2020 Lexington sale, which was staged during the height of the pandemic before vaccines were available and great uncertainty reigned. Just a year after selling two million-dollar yearlings in 2019 — a high the 2020 sale was unlikely to top even if there had not been a pandemic — last year’s auction still recorded the second-highest gross ($41,552,000) in sale history and its fourth best average ($50,922).

‘I’m optimistic,” Michelle Crawford said of this year’s sale. “I think even though it’s going to be a challenge for some people to get here from abroad, I think people are making their way here. I think people are ready to buy horses. I think they are excited. There’s always that trepidation with COVID out there still, but I also think that the industry is strong right now, the racing programs are strong and people are going to want to buy. I think there’s a good ROI (Return On Investment) on purchasing yearlings and being able to race them for decent purses. I know we are working on the New York program hard. I know that Jeff Gural is going to raise purses in New Jersey.

‘I really think, at the end of the day, we’re going to have a strong sale.”

Thomson has long pointed out that there is more purse money available than ever and that pot appears to be still growing in most jurisdictions.

“Ohio is doing well. Kentucky added a $11 million (for 2022),” Thomson said. “Think about all those Sires Stakes programs, what people racing for in Canada. New York has got a lot of money as well and people are complaining that they cut down on some of the different races, but they are still racing for a ton of money.”

David Reid, co-manager of the Lexington sale, said there’s been positive announcements in many jurisdictions and programs such as those in Pennsylvania and New York will have 2021 purses closer to 2019 pre-pandemic numbers than those available in 2020 when casino closures led to decreases in purses in some regions.

“They just made a significant announcement here in Lexington last week, which was well-publicized that the (Kentucky) Sires Stakes and the level below it was going to get a healthy increase. I know that the Jersey Sires Stakes have already announced an increase in their finals and they are working on other enhancements to the New Jersey program and I believe there will be some announcements coming out here shortly. Obviously, Ohio is clipping along in good order. I think your jurisdictions are pretty healthy overall and returning back to a semi-normal racing schedule. The overall purses paid out in 2021 are greater than 2020 and I think it all has a cumulative effect, in one way or another,” Reid said. “I don’t want to leave out Massachusetts, because they’ve had an increase in their Sires Stakes and they are strong up there.”

Another bellwether for Lexington is the strength of the thoroughbred sales.

“I just finished Keeneland in September and they sold 4,000 horses and it was as strong at the end as it was at the beginning,” said All American’s Rob Tribbett. “That’s because it’s a great time to race standardbreds or thoroughbreds with the purse structures that we have in many jurisdictions. We’re not relying on one place, so it’s really a great time to race horses.

“Obviously, there’s a different buying group of people. This is for some people, obviously, a luxury item, so that corresponds… I think there’s an enthusiasm for racing everywhere and that leans to point that the sale should be exciting.”

“The vibe out of the Saratoga sale in August and the vibe out of the sale here that just concluded was very good. It seemed like there was good depth of the market and good interest at all levels. Translating that into our sale, I see our depth being very, very strong. I don’t know what the top end is going to be, but I know we have a lot of offerings for a lot of places, a lot of jurisdictions, that it’s going to be exciting for a lot of people.”

Grossman said the biggest challenge is the lack of new owners in the business and the lack of competing interests bidding against each other.

“I think it was old man Simpson that said, ‘You don’t need buyers, you need bidders,’” Grossman said.

“I think the market indicators are looking that way and all the buyers that I’ve been showing yearlings to are very optimistic about it. I think it’s going to be a very strong market,” Brady said.

Spring Haven’s Senena Esty said she’s an eternal optimist but she feels, “better this year about going into the sale than I did last year. I think last year was such uncharted territory with the pandemic. There was just so much fear. Now, with people’s understanding and the vaccinations and things of that nature… I feel optimistic about the sale.”

Reid said he, “made a comment last year that things were changing on a daily basis and a weekly basis versus a monthly basis. I think we’re in fairly good shape as far as the world peace at the present time. The stock market seems to be relatively stable, so I don’t think we have to worry about anything this week that we see on the horizon.”