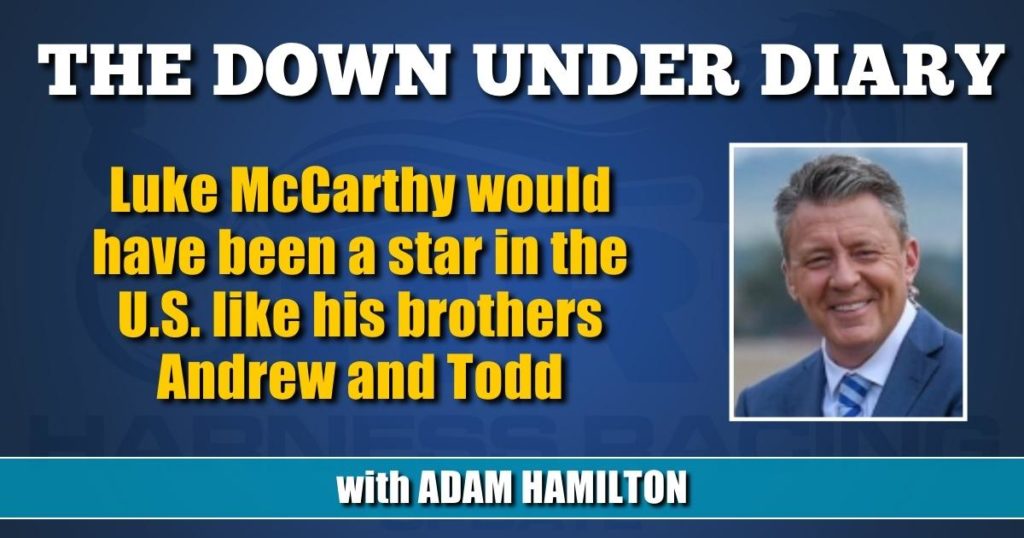 Luke McCarthy would have been a star in the U.S. like his brothers Andrew and Todd 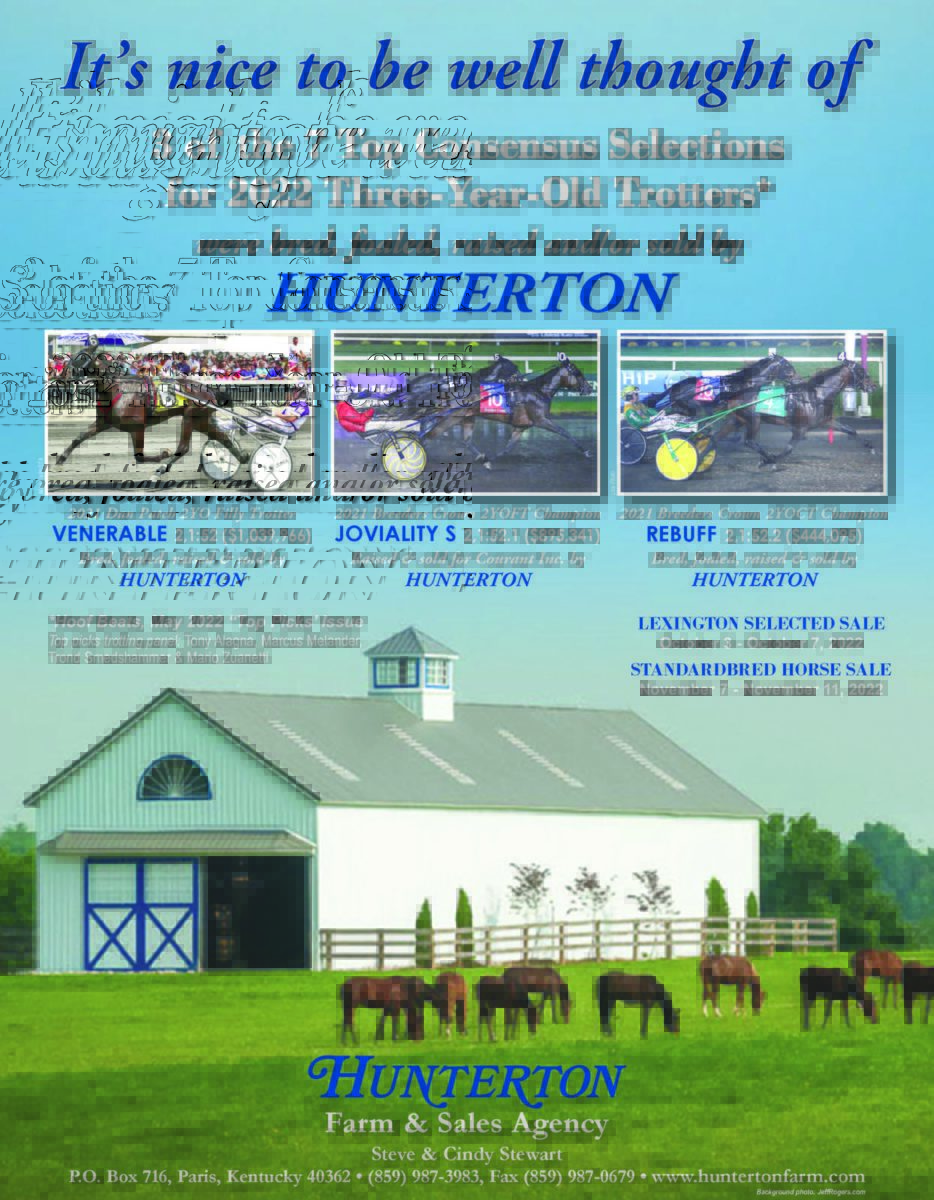 There is no doubt Luke McCarthy would have been a star in the U.S.

The gun (Australian slang for champion) Aussie horseman showed that during a working holiday in the U.S. back in 2009 when he seized a freakish opportunity to drive Muscle Hill to victory in the World Trotting Derby at Du Quoin State Fair.

McCarthy’s phone rang while on his way to grab lunch in Lexington, almost 300 miles from Du Quoin.

Courtesy Menangle Park Heading into Down Under’s biggest series, the Inter Dominion later this month, Team McCarthy has the two standout favorites in two-time Miracle Mile winner King Of Swing (above, winning the Miracle Mile on March 6, 2021) and emerging 4-year-old Expensive Ego, who was second to King Of Swing in this year’s Miracle Mile.

“We were actually heading to a sports bar at The Red Mile so we could watch the Muscle Hill race that afternoon,” he said. “A good mate of mine rang saying they’d pushed all the races back and telling me to expect a call from Greg Peck (Muscle Hill’s trainer). Greg called soon after and said, ‘Do you reckon you can make it here in time?’”

The opportunity arose when rain delayed the Du Quoin meeting by six hours, causing a clash with Mohawk that night. Muscle Hill’s driver Brian Sears was one of many forced to miss the World Trotting Derby.

“I jumped straight in the car, still pinching myself it was happening. I was so nervous but I didn’t need to be. Muscle Hill was something else and he did all the work for me.”

That win, as life tends to do, opened some serious doors for McCarthy, but he was torn between two worlds at the time.

“I didn’t go over there to drive, it was more to learn about training techniques,” he said. “But I took a mare across with me, my great mare Fleur De Lil. She did a good job and then Noel (Daley) asked if I’d go down to Kentucky with his team, which Anton Golino was taking down.

“I started to get some better drives down there and then Muscle Hill won and I was getting offered loads of great drives, but I was committed to going back home.

“I did plan to go back (to the U.S.). I think I could’ve ended-up like Andy and Toddy (McCarthy’s younger brothers) have, but things changed when I got back home and I didn’t get back.”

Luke does think back, wondering what might have been.

“Do I? Yes, of course I do. And I do wish, in some ways, I’d gone back over and given it a serious go, but I also achieved some great things here with some terrific horses,” he said.

Little did we know at the time it would be forerunner to a stunning impact across North American by the McCarthy clan.

These days, Luke, and his parents John and Narelle, set the alarm for early rises whenever the big U.S. races are on to cheer for Andy and Todd.

“I’m just so proud of them,” Luke said. “You sort of shake your head a bit at how successful they’ve both been and when you throw in Dexter (Dunn) from down here as well, it’s just incredible.

“Andy’s been there for 14 years and he’s really worked hard for all his opportunities, in many ways he helped pave the way for Dex and Toddy when they went across. To see Andy doing so well now it’s pretty special as a brother.

“The only disappointing part is not being able to get across there for the past couple of years to catch-up with them and go to some of the biggest meetings. I know that’s been especially frustrating for mum and dad, but things are looking better now, at last.”

Back home, Luke and wife, Belinda, were lured away from a hugely successful Queensland stable to New South Wales with the lure of the state-of-the-art new Menangle track, which opened in 2010.

In 2011, they established what’s now up with the best properties in Down Under harness, Cobbitty Equine Farm. It’s 65 acres, less than an hour from Sydney airport and just around the corner from Menangle racetrack.

And it’s so much more than just an elite training centre.

It has also, much to the unplanned surprise of the McCarthys, become a breeding mecca. This season their stallion roster includes: McWicked, Rock N Roll World, Capt Midnight plus domestic stars such as Lochinvar Art, Bling It On, For A Reason and Jilliby Kung Fu.

“The stallions are something we didn’t plan, it just sort of happened,” Luke said. “We had Bling It On, who was one of Australia’s best pacers at the time, get badly injured and need a year off. So, we decided to stand him … and that started it all.”

The other revered element to Cobbitty Equine Farm is its rehab and pre-training facilities.

“It was the logical fit. We hope to get him back racing, so he can do rehab and pre-training up there while he serves his first crop of mares,” Moran said.

“And Luke and Belinda having shown how successfully they can do that, mixing breeding with racing to win some of our biggest races with Bling It On and For A Reason a few years back.”

Team McCarthy, of which Belinda is the head trainer, is the most influential stable in Australia, especially at the open-class level.

Heading into Down Under’s biggest series, the Inter Dominion later this month, Team McCarthy has the two standout favorites in two-time Miracle Mile winner King Of Swing and emerging 4-year-old Expensive Ego, who ran second to King Of Swing in this year’s Miracle Mile.

“King Of Swing is our best hope. He’s tough and seasoned and will relish the four runs in a fortnight. I’m not saying Expensive Ego won’t, but it’s a harder ask on a four-year-old, especially when throw-in all the travel between venues during that fortnight, as well,” McCarthy said.

It’s hard enough beating Team McCarthy anywhere, let alone in their own backyard of NSW where this Inter Dominion will be run.

The Inter Dominion, a gruelling series of three compulsory qualifying heats in the first week into the final a week later, starts at Menangle on Nov. 27. It then heads to Bathurst on Dec. 1, Newcastle on Dec. 5 and then into the Grand Final back at Menangle on Dec. 11.