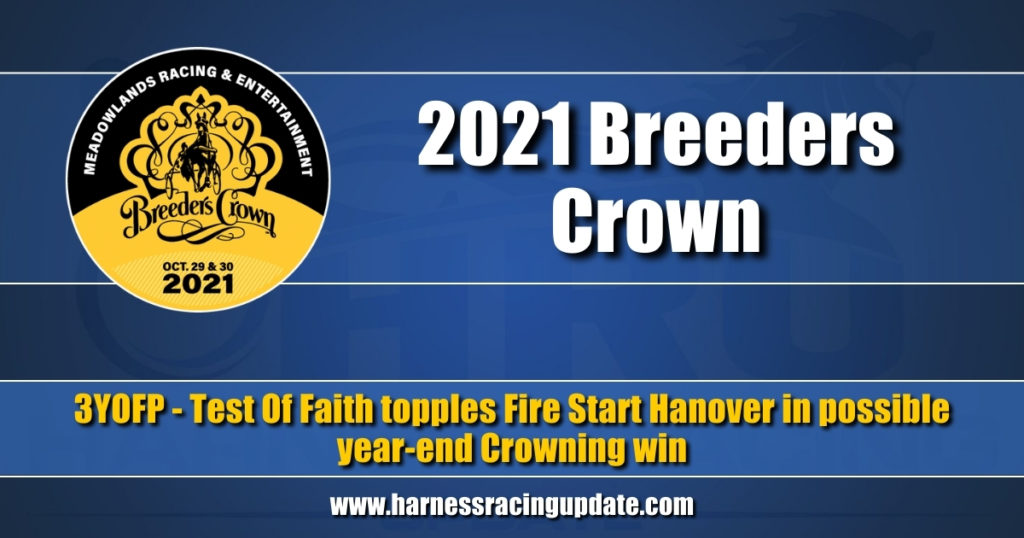 Last season, trainer Brett Pelling shelved Test Of Faith following her victory in the International Stallion Stakes on Oct. 9 – a 1:48.4 mile; just a fifth of a second off Warrawee Ubeaut’s world record set in 2018. At the same time, Richard “Nifty” Norman had a developing star in Fire Start Hanover, who ventured from Lexington to Harrah’s Hoosier Park with Test Of Faith’s absence to sweep the elimination and then the final of the Breeders Crown 2-Year-Old Filly Pace to snatch year-end honors.

Test Of Faith, with a single blemish to her otherwise unbeaten card coming into her sophomore season, won her first five starts of the season. She then faced Fire Start Hanover for the first time on the year in the $62,800 Tompkins-Geers on July 31. From a second-tier post, Test Of Faith forged to the lead through the first half of the race, but had Fire Start Hanover behind her from the pocket before driver Dexter Dunn tipped her off David Miller’s helmet and nailed Test Of Faith on the finish.

From that point forward, Test Of Faith came out on top over Fire Start Hanover in all of their proceeding matchups. She vaulted through the “slop” in the $150,000 Bluegrass Stakes at The Red Mile in :25.4 and then hustled off cover to secure a two-length victory the next week in the $207,000 Glen Garnsey Memorial. The race for year-end honors coming to the sport’s marquee, and often award-deciding, event had Test Of Faith in need of one elusive victory to solidify her card for divisional, and into conversation for Horse of the Year, recognition.

A Breeders Crown victory before the race was no certainty, but still seemed well within grasp for Test Of Faith. Her dam, Cannae Cammie, competed in the Breeders Crown at ages 2 and 3 and even won her elimination for the 2010 3-Year-Old Filly Pace. But she lost in both outings with her best finish coming as a fourth-place effort to champion mare Put On A Show in 2010. Test Of Faith also comes from a stable of Breeders Crown royalty in Pelling, a champion Down-Under-born conditioner who owns 11 trophies in the series. But Pelling, after his famous departure from North America in 2006 to his return in 2016, had just one Breeders Crown victory in his second act when Caviart Ally upended star mare Shartin N in the 2019 Mare Pace at Woodbine Mohawk Park. He otherwise was within grasp of a second Crown trophy when Papi Rob Hanover finished first in the 2019 2-Year-Old Colt and Gelding Pace at Woodbine Mohawk Park, but interference in the stretch disqualified him to second behind Tall Dark Stranger. Prior to Caviart Ally, Pelling last won in the 3-Year-Old Filly Pace in 1996 with Mystical Maddie.

Test Of Faith floated off the wings of the starting car the 1-5 favorite to win the $600,000 Breeders Crown 3-Year-Old Filly Pace but settled to race sixth while caught off the cones to a :27 first quarter, set by Fire Start Hanover. Driver David Miller remained patient with Test Of Faith and eventually was rewarded when Blue Diamond Eyes took the bait to race first over to a :55.4 half.

“It didn’t go like I thought,” David Miller said of the trip. “I was planning on leaving and probably getting away around fourth, then probably having to come first over. But when Dexter and a couple other ones left aggressively, I changed my plan. But I knew I was following a good horse, Blue Diamond Eyes. I just waited on (Test Of Faith) and she just took me right into the race. She is pretty awesome. If I can just give her a little bit of cover like that, she comes off her cover really well. She felt strong at the top of the stretch, just waiting for me to call on her.”

Miller motored his charge by Blue Diamond Eyes off the corner and promptly put away Fire Start Hanover with her only remaining threat to the eighth pole being Scarlett Hanover, who could only give pursuit to Test Of Faith in the final yards as the Art Major filly held tried and true on the front to the finish of a 1:49.4 mile, winning by a length. Fire Start Hanover fought gamely to the inside of Blue Diamond Eyes to hold third and Grace Hill rounded the payees.

Pelling opted to take a bye to the final with Test Of Faith, racing her as a prep in the $100,000 Courageous Lady at Northfield Park on Oct. 16, which she won in 1:50.2. Scarlett Hanover was the only other filly to take a bye.

“I think if anything costs her [Horse of the Year] it’ll be the schedule,” Pelling said, “because she was meant to be in the Fan Hanover and the way the New York Sires Stakes is laid out, you have to race in three legs and there’s only five legs. By the rescheduling of the Fan Hanover (due to the COVID-19 pandemic), she couldn’t go. It was either one trip away or missing out on really four races to get that one in and the dollar comparison… it was all six of one, half dozen of the other and we still had travel issues, so it is what it is.”

The victory for Test Of Faith propelled her further into millionaire territory, having now banked $1,505,239 for owners Melvin Segal, Kentuckiana Racing Stable and Eddie Gran while also earning over $1 million on the season. Fred Hertrich III bred the Art Major filly for his fifth Breeders Crown trophy as a breeder. Melvin Segal and Eddie Gran each earned their first Breeders Crown trophy along with the moniker of Kentuckiana Racing Stable, though Kentuckiana Farms owned one Breeders Crown winner when Naughty But Nice won the inaugural 3-Year-Old Filly Pace in 1984 at Liberty Bell Park.

“It’s been incredible, 21 of 24 [starts],” said Ken Jackson, co-owner of Test Of Faith through Kentuckiana Racing, on the record and ride his filly has given him. “And I think the three seconds were by less than a couple of lengths… and all those were tough trips.

“Melvin Segal was great. He bought the filly and let us come in early on before she started racing. We don’t race that many each year. We usually race two or three fillies a year, a piece of them, and this one was sold at Harrisburg [for $92,000]. Brett Pelling and Melvin loved her and we have a good relationship with both of them and said, ‘Hey, we’d love to be part of it.’ So, it’s exciting.”

Next on Test Of Faith’s docket is the Matron Stakes on Nov. 11 at Dover Downs, per Pelling. Her Breeders Crown victory earns her an automatic berth to the TVG Mare Pace final on Nov. 20 at The Meadowlands, which Pelling also said may be on her radar.

“It’s going to be a meeting because obviously I don’t know,” Pelling said. “I’ll talk to the guys and everything. It has been a long year already for her.

“She’s going to come back and race at 4. So, is it necessary? The people that own her, they are breeders, so it’s 100 per cent commitment if she does come back to race at 4. She’s very sound, very easy.”