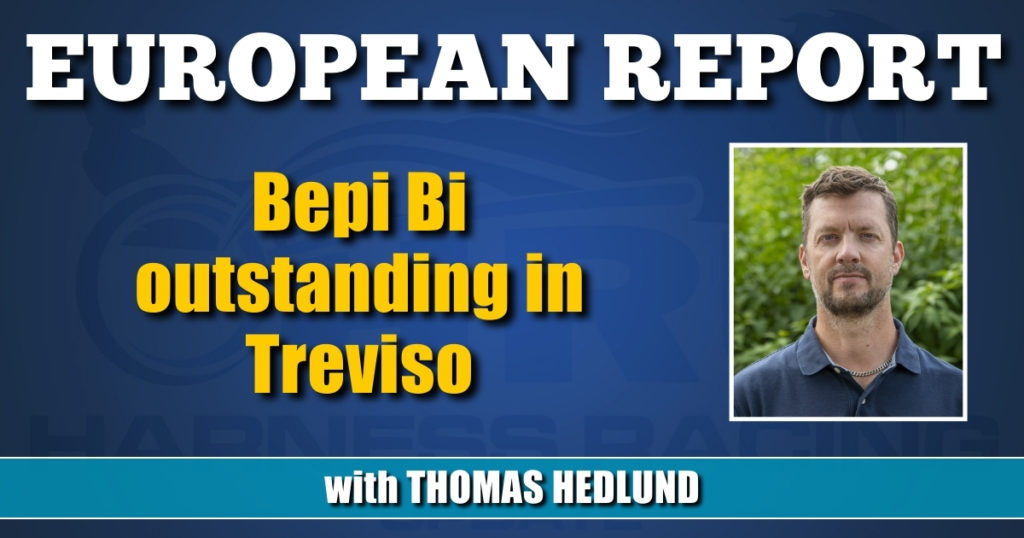 Bepi Bi is one of the most interesting 4-year-olds in Europe this season and the half-brother of world champion Twister Bi (Varenne—Lorraine Bi) collected his big trophy of the year in Sunday’s race by winning in 1:54.3.

And Gocciadoro has a great chance when the $255,000 Gran Premio Delle Nazione over 1.3 miles is scheduled in Milan on Saturday (Oct. 23).

Nine horses will gather in Milan and Gocciadoro’s choice in the bike is Zaccaria Bar who starts from post 1 behind the gate, while his duo Vivid Wise As (Matthieu Abrivard) and Vitruvio (Andrea Guzzinati) begin from post 5 and 6, respectively.

Four in a row for Cleangame

Jean-Michel Bazire’s top gelding Cleangame (Ouragan de Celland) has made a great comeback at the tracks during the fall and in Sunday’s (Oct. 17) $173,000 Grand Prix du Sud Ouest, in Beaumont-de-Lomagne, Cleangame played with his opponents over 2,400 meters.

Bazire sent his 9-year-old gelding to position first over with 1,100 meters to go and with 600 meters remaining of the race, the duo was in front. Bazire just controlled his opponents over the long home stretch and Cleangame won easily in mile rate 1:56.

Stablemate Rebella Matters finished strongly as runner up ahead of Ce Bello Romain.

The Breeders Crown for 3- and 4-year-olds ends the stake racing in Sweden and on Sunday (Oct. 24) it’s time for eliminations ahead of the Nov. 7 finals at Eskilstuna, the traditional host of the event.

The eliminations are held at Solvalla on Sunday and the race card is outstanding with all the best horses there are in every division, except for the 4-year-old colts and geldings, where the sport’s new star Calgary Games is missing due to stud work at Menhammar Stuteri.

Fans will get more than their share of entertainment from trotters Lara Boko, Red Lady Express and Good Vibes among the 3-year-old fillies. Francesco Zet, Mellby Jinx, Felix Orlando and Borups Victory in the eliminations for 3-year-old colts and geldings.