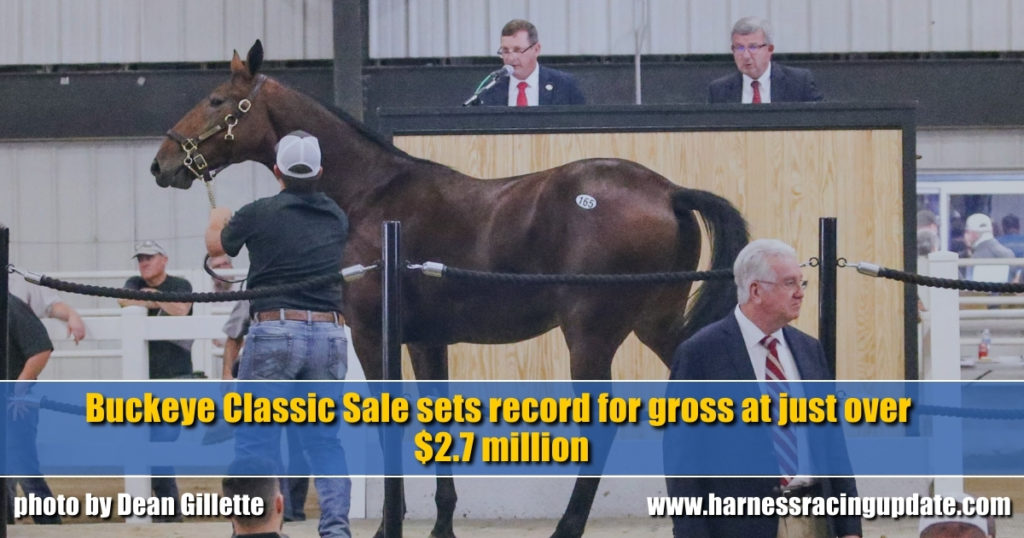 The seventh edition of the Buckeye Classic Sale, held Tuesday (Oct. 12) at the Champions Center Expo in Springfield, OH, saw a new record established as 221 yearlings sold for a gross of just over $2.7 million, the most in the sale’s history. The sale average of $12,238 was down slightly from last year’s mark of $12,904 when 26 fewer horses were sold for $2.516 million. Offspring from the red-hot Downbytheseaside topped the one-day session, with a trio of babies taking the top spots.

“I’m pleased with the trend we’ve seen the past few years. With Ohio being the hottest program today, buyers have been very bullish at the yearling venues which is obviously good for those breeders having invested earlier in the program,” said sale manager Steve Cross. “Consignors and buyers alike are finding the Buckeye Classic a very good option to do business with and we are always grateful for those who participate.”

Dean Gillette Hip 165 Solution, a Downbytheseaside colt, topped the Buckeye Classic Sale with a bid of $55,000 from Mark Evers.

Ohioan Mark Evers purchased only two horses at the Buckeye Classic, but he left with the sale topper and second-highest priced yearling on the day. Evers spent $55,000 on Solution, a Downbytheseaside colt consigned as agent by Trotting Traditions. Out of the Well Said mare Satisfy My Soul, the colt was cataloged as Hip 165 and is a half-brother to PA Stallion Series division winning freshman Vicious p, 2, 1:52.4f; BT 1:49.

Evers also signed the ticket on Seaside Abby, Hip 197, a filly from a family with which he is well connected. She is the second foal from Rockin Image mare Velocity Abby, a horse that Evers trained and briefly raced. He also bred and is campaigning Seaside Abby’s half-sister, Fear Abby, a freshman winner with a 1:56.3 mark. Evers bought the yearling for $50,000. All told, a group of five sired by Downbytheseaside grossed $205,000 and averaged $41,000.

Dublin Valley offered a consignment second in size to only Abby Stables. The Fredericksburg, OH-based farm cataloged 30 yearlings and sold 27 for a gross of $372,000 and an average of just under $13,800.

“It felt like the bottom was stronger than in the past and it felt like if you had a nice colt or filly you could certainly get a price that you could be pleased with,” Yoder said. “I thought overall it felt like a stronger sale at all the levels, whether you were at the bottom edge, or middle or upper.”

Dublin Valley also sold yearlings from the first crop of their trotting stallion Enterprise. A total of 13 Enterprise babies were sold, averaging $14,308. The highest priced from the crop was Devoted Beauty, Hip 157, hammered down for $25,000.

“We were very pleased. With people not totally knowing what they are going to get, hopefully something they will be very pleased with, we thought he was very strong too for being a first crop sire that is an unknown at this point,” said Yoder.

Henry D. Burkholder led all consignors in sale average. His quartet of yearlings, which featured the aforementioned Seaside Abby, grossed $93,000, good for an average of $23,250. Abby Stables, which offered the largest consignment, sold 33 for a gross of $415,500, averaging $12,591.

Rosy Weaver was the most active buyer at the Buckeye Classic, signing eight tickets totaling $155,000. Chris Beaver purchased six yearlings for a total of $98,500.

Seven horses were purchased online via Proxibid for a total of $82,000.