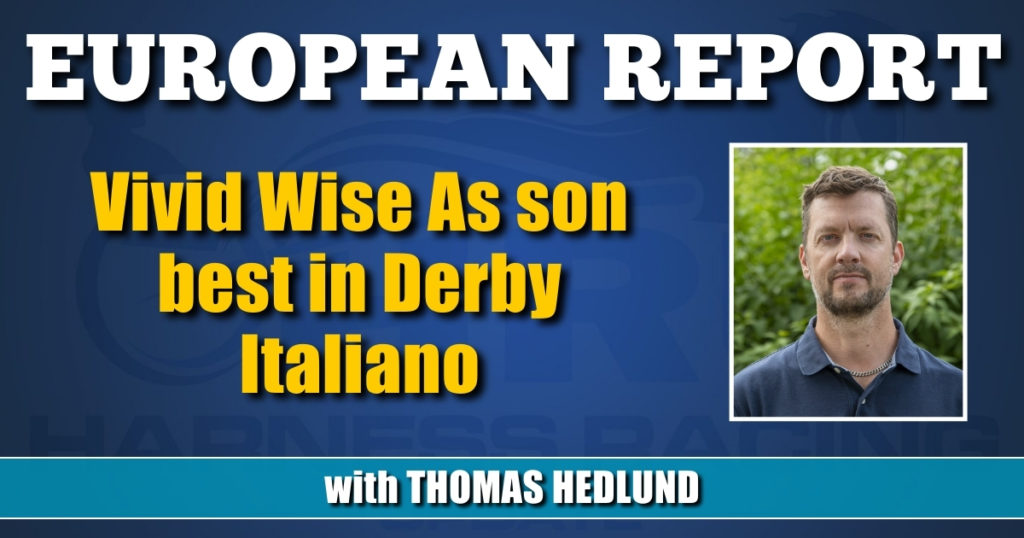 Vivid Wise As is still going strong on the racetracks all over Europe and the runner up from Elitloppet this year has also worked as a stud beside his duty on the tracks. His first crop was born three years ago and when the high staked $925,000 Derby Italiano was held in Rome on Sunday (Oct. 10) afternoon, Vivid Wise As had one shot to become historic even as a stallion.

Marco Smorgon, who celebrated great success as a trainer in Italy and Europe 10-15 years back, has been a little bit in the shadows since Alessandro Gocciadoro’s big dominance in the sport set off a couple of years ago, but when it was time for the Italian Derby, Smorgon had done the job properly. Vivid Wise As son Charmant de Zack, driven by Antonio di Nardo, started from post 1 behind the gate and Charmant de Zack couldn’t defend the front position as Callmethebreeze (Trixton) hit the lead. Di Nardo eventually found a perfect spot in second over and Charmant de Zack was the strongest horse at the home stretch in Rome. Mile rate for Marco Smorgon’s winner was 1:58.3 over 1.3 miles.

Vivid Wise As’ start as a sire couldn’t be better and for Marco Smorgon, who has trained several top trotters throughout the years, this was his first triumph in the biggest race in his home country.

In the $292,500 Oaks del Trotto, Enrico Bellei took a close wire to wire win with his Crystal Pan (Ideale Luis). As in the $925,000 Derby Italiano, Gocciadoro had five contenders, but his horses were out of luck in both races and in Oaks his Caramel Club and Cash Bank Bigi went off stride at an early stage.

Crystal Pan had steady company from first over trotter Calypso di Poggio and these two horses battled for the title all the way towards the wire. A head separated in Crystal Pan’s advantage and the 3-year-old filly came home in 1:56.3.

Two big races for 3-year-old trotters were held at Charlottenlund racetrack in Copenhagen, Denmark on Sunday (Oct. 10) afternoon and in the $105,000 Danish Kriterium, Jeppe Juel’s Garfield (S.J.’s Caviar) was outstanding his crop-brothers.

Jeppe Juel sent his 3-year-old to the front with little more than a mile to go in the 1.6 miles long race and in that position, Garfield proved to be several lengths better than the rest of the contenders. Garfield sprinted away from his opponents in the last turn and the home stretch became a nice ride for Jeppe Juel. Garfield came home in mile rate 1:59.3 over the distance and it’s clear that Juel has the dominant horse in the Danish bred ”G-crop”. Garfield has now claimed ten wins in eleven attempts and he has collected the more prestigious 3-year-old races so far in his home country.

In the $60,500 Danish Kriterium for fillies, Wishing Stone daughter Gaby C N captured leader Go On Gardenia just before the wire paired with Ken Ecce and the duo noted mile rate 2:01.2 over 1.3 miles.