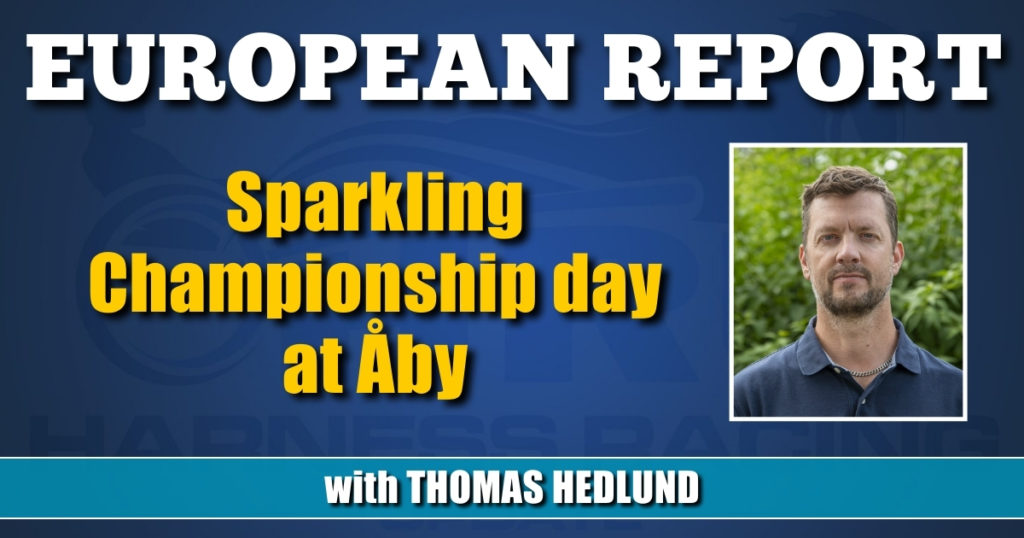 The stars were out in Sweden as Calgary Games, Extreme, Very Kronos, Ivensong and Honey Mearas won major stakes.

An impressive race card was offered at Åby racetrack on Saturday (Oct. 9) afternoon and some of the best horses in Europe showed up on the Swedish west coast.

The biggest stake race, the $465,000 UET Grand Prix for 4-year-olds, became a one-horse show signed by Timo Nurmos’ undefeated Derby winner Calgary Games (Readly Express) and driver Jorma Kontio. When toughest opponent San Moteur disappeared as he went off stride when the car accelerated, the road toward the lead was open for Calgary Games.

Kontio noted that San Moteur was gone and aimed for the lead, which he reached at an early stage and when an undefeated Derby winner is in front, nothing much happens in a race and the excitement never really materialized. Calgary Games was outstanding this day and Jorma Kontio just sat calmly behind his horse over the stretch as Calgary Games won in a mile rate of 1:55.2 over 1.3 miles.

“Calgary Games had a lot of power to use when we hit the wire and I started to let him run a little bit faster the last quarter of the race,” said Kontio.

French trotter Hirondelle Sibey finished second after a pocket trip and Mister Hercules reached the bronze medal from third position on the inside.

Harness racing fans need a star like Calgary Games and we all hope that he comes back at the tracks 2022.

Upset in European Championship for 5-year-olds

Elitloppet winner Don Fanucci Zet (Hard Livin) wasn’t even first choice when the $115,000 European Championship for 5-year-olds was held. Jerry Riordan’s Aetos Kronos (Bold Eagle) came into the race off an impressive win in the $230,000 Jubileumspokalen at Solvalla in August, a race where Don Fanucci Zet finished second and the big talk ahead of Saturday’s race was about the meeting between the two big 5-year-old stars.

From post 6 (Aetos Kronos) and 7 (Don Fanucci Zet) they both opened quickly, but the first quarter cost them as Aetos Kronos landed outside of early leader Extreme (Chocolatier). Steen Juul opted to let Aetos Kronos pass his Extreme after 600 meters and the pace was set at a high level at that point.

Aetos Kronos in front, Extreme in the pocket and Don Fanucci Zet as third on the inside, that was the conditions as the field turned for home and other horses had tried attacks in the last turn. Aetos Kronos seemed to cruise to another big win, but Danish bred Extreme wanted to challenge for real and Juul’s horse passed the leader ahead of the wire. Aetos Kronos was second and Don Fanucci Zet finished well as third.

Denmark needs a big star in harness racing and Extreme is probably the horse that will put the country in the major races again. Juul is a true master in the game and he can look back at several big wins throughout his long career, but he has most certainly never had a faster and more interesting horse than Extreme. Big congrats to him and the entire harness racing nation.

French driver David Thomain acted with big frigidity when he steered Philippe Allare’s 3-year-old Ready Cash filly Ivensong in $115,000 European Championship for 3-year-olds. Thomain hit the pocket position behind leader Red Lady Express and trusted that his horse would be on the toes when open stretch appeared at Åby.

And Thomain’s feelings proved to be correct. Ivensong didn’t quite understand the signal of attack at the top of the stretch, but the closer she got to the wire, the faster she trotted and just before the finish line Ivensong disarmed leader Red Lady Express.

All in all, Thomain did everything right and it was especially nice to see the French guest’s calm act in the bike, even if it was a close call in the end.

“Ivensong has raced very well in France and today we tried to race her without shoes. I know she’s a fast trotter and Ivensong did it well since she got a little bit fired up during the race,” said Thomain.

Title defender Very Kronos (Ready Cash) was first choice in the $115,000 Swedish Championship for older trotters despite a 10 post over 1.6 miles and driver Erik Adialsson solved the task pretty smoothly, even if Very Kronos was very eager when the field gathered behind the car, seconds ahead of the start.

Adielsson sent Very Kronos to position first over and controlled leader Milliondollarrhyme at the back stretch. Second over running Upstate Face attacked in the last turn, but Very Kronos is tough to surpass and Svante Båth’s 7-year-old trotter took a safe win in mile rate 1:56 over 1.6 miles. Upstate Face and Diamanten finished behind the winner and this was the last start of the season for Very Kronos.

“It’s a relief when he crosses the wire since you never know exactly how he will act in races. The plan is to check him up ahead of a sire career and then we’ll see what happens next year,” said Båth.

In the $115,000 Championship for mares, Daniel Redén tried his 4-year-old dominant Honey Mearas (who has won Stochampionatet and Derbystoet for 4-year-olds this season) among older, more merited ladies and the Readly Express daughter proved to be better than her opponents.

Örjan Kihlström took it safe from the start while Mily hit the lead in something that looked more like a high speed flight for trainer Robert Bergh. Honey Mearas took over the lead when the field hit the back stretch for the first time and when in front, Kihlström lowered the pace considerably ahead of the last kilometer. And when attacks began before the last turn, Honey Mearas showed that she wouldn’t be easy to pass. The race’s single 4-year-old trotter played with the challengers over the stretch and she came home in 1:56.2 over 1.3 miles.

In $57,500 Racing Under Saddle Championship, French superstar Eric Raffin was offered a ride on Robert Bergh’s Mindyourvalue W.F. (Hövding Lavec) and as heavy favorite, Raffin made no mistakes. Mindyourvalue W.F. got order of a serious attack at the back stretch and the advantage the duo had in the last turn was too much for heroic chaser and runner up Polycrates Face.