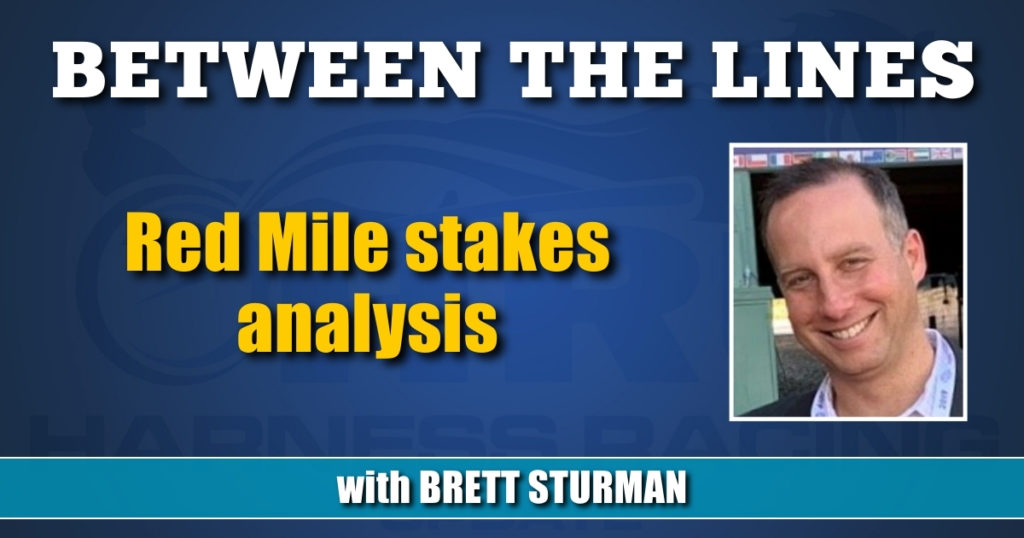 It looks like Nancy Takter has found the keys to ALTAR and those last few races have been vicious. She has earned her shot against the sport’s best older trotting mares and the lone 3-year-old in here may be able to handle it. In her first race since career rival Manchego retired, ATLANTA is a tough call. She wasn’t at her best in two starts in Canada, hasn’t raced in about three weeks, and now has to go off-Lasix. WHEN DOVESCRY has been a model of consistency all year and fended off all the boys last out in the Dayton Derby except for a good one that got the trip. HYPNOTIC AM gets the rail and gets Sears back.

Picks: Altar, When Dovescry, Hypnotic Am

In a group of fillies that have gotten to know each other very well this year, GRACE HILL remains sharp. She had her winning streak derailed last out on having to wait for room to the inside against a rival that already had the jump; may very well offer a similar 5-1 price as she did last out. TEST OF FAITH rebounded from her runner-up finish in the Jugette with a win here last out. It did come though off a perfect second-over trip and now has to deal with an outside post; likely play-against. FIRE START HANOVER was used hard throughout and was still trying against many of these same rivals last out; the move inside is big. BLUE DIAMOND EYES gave way late after being pressed here last out. Her miles two and three back catch the eye, though she’ll need her very best to win this.

BEADS is one of many in here that has to go off-Lasix, though the last time he was in that scenario he won the Hambletonian Maturity. He regressed back to a break in the Maple Leaf Trot but that return qualifier looks fast and every race he’s stayed flat would be good enough to win this. BACK OF THE NECK may have seemed like a shock last week but he had been hinting at a top performance, his class has obviously always been there. He did trip out that race but a repeat isn’t out of the question. There isn’t much known on Sweden import ECURIE D DK, but he has to be respected for Svanstedt based off that lone qualifier with a :26.3 final quarter; could be any kind. FORBIDDEN TRADE is always a threat, just depends on what price he offers. IT’S ACADEMIC will show speed but I don’t think he can beat these; very similar profile of READY FOR MONI.

Picks: Back of the Neck, Beads, Ecurie D Dk

If you saw the Dayton Derby, you’d be hard pressed to go against OCEAN ROCK. In the process of setting a new life mark of 1:48, he dispatched of that field with total ease and the race was over by three-quarters, in raging form. Speaking of form, I know that ALLYWAG HANOVER has emerged as the clear leader in this division and is another that keeps getting better but having to race without Lasix now plus post 10 does give reason to play against. Of course, if he’s as good as he was in the Mohawk Gold Cup then none of that may matter. NICHOLAS BEACH was dismissed at high odds last out which was a surprise as he continues to show up in every race except the Harrington one from post 8. He didn’t have clearance until late at Dayton last out and he can certainly win with a trip. CATCH THE WIRE could only muster a weak first-over try last out but it was a quick half that he went into; he’s better than that. THIS IS THE PLAN was left in the wake of OCEAN ROCK last out.

I’m sure everyone in here is thrilled to finally be able to race without going against Lyon’s Sentinel, most of all ROCKNIFICENT. In addition to having been the logical choice as is from the rail, she’s the only mare in here who had raced prior without Lasix; everyone else in here is off-Lasix from their last race as per race conditions. GIA’S SURREAL has given these types a serious run or two throughout the year; continues to show speed and this could be a field to her liking. DRAMA ACT had no shot last out in the Dayton Distaff and will have every opportunity to make a truer showing of herself today if good enough. PEAKY SNEAKY was a runner-up to Lyon’s Sentinel two back and fellow Takter-trainee JK FIRST LADY draws the outside in tough to figure form.

Hambletonian Oaks heroine BELLA BELLINI was top notch again last out in the Elegantimage despite being bested late by Donna Soprano. With the exception of a brief tuck, she was parked first up for most of the mile and looked good into the stretch once she cleared by Donna Soprano, but the trip took its toll late. EMPRESSIVE HILL was a never a doubt winner last out in the Kentucky Championship final, has dominated rivals at this track for months, and could certainly give the favorite a run for her money; at an obvious disadvantage though due to the post. HERCULISA was impressive here last week and Ohio-bred filly lands the rail to aid her cause, will have to continue to step it up yet again. YOU ATO DREAM is a speed factor; KATIE’S LUCKY DAY rode the liveliest of cover two back at Woodbine.

CHARLIE MAY was a $60,000 supplement to this race and starting from post 12, he won’t even be able to begin with his nose on the gate. He was huge last out when responding to the challenge from PERFECT STING after a deluge delayed that race; Miller will have to figure out to navigate in this bulky field. LOU’S PEARLMAN is fresh off his win in the Little Brown Jug and that first-over win from when he popped the two-hole before the half has to go down as one of the best Jug performances. He’s been razor sharp since going on Lasix but now he goes off; interesting to see how he handles that as well as the move back to the big track. SOUTHWIND GENDRY was headed by ABUCKABETT HANOVER last weekend over this track and responded back on the inside to move away late. PERFECT STING continues to fire every race, will offer a higher price than he has in some time. ROCKYROAD HANOVER bounced back last week with a wide rally off a hot pace.

DANCINGINTHEDARK M went first-time Sears last out in the Kentucky Championship series final and Sears was somehow able to keep him on gait and on stride in the late stages when he surged for the win in 1:49.3. After not being the favorite after six consecutive tries at odds-on, he’ll likely be bet back down once again off his 9-2 morning line. CUATRO DE JULIO was ultra-game in defeat last out in the fast mile at the hands of #1, nothing wrong at all with his last two tries at the Red Mile and is a contender. JUJUBEE was a pocket rocket to beat DANCINGINTHEDARK M on Hambletonian Day and has remained in raging form since. One of two $75,000 supplements to the race, he’ll be close to the front as always. AHUNDREDDOLLARBILL is the other supplement and I suppose we can toss that last race in the slop but I still think he’ll need his very best to go with the top ones. FLY LIGHT and MON AMOUR were a couple of Svanstedt bombs that won here on the same day last weekend. Today, Svanstedt is on DELAYED HANOVER and he’s a wildcard making his first start in over a month; is capable and will offer a huge price. AMBASSADOR HANOVER hasn’t been as sharp since the Hambletonian but does get Zeron back. JOHAN PALEMA wasn’t particularly inspiring as the even money favorite last out.