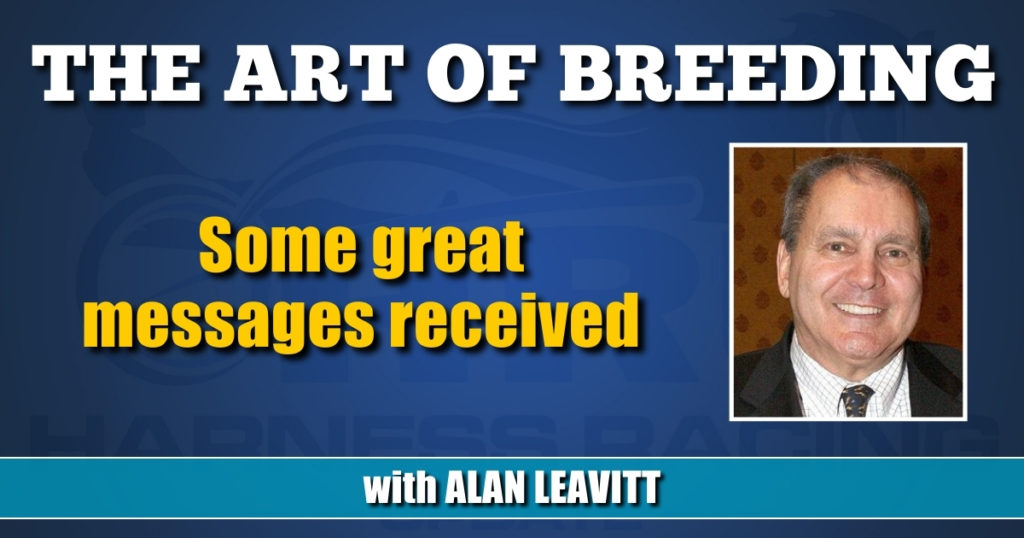 I received a wonderful email this week from Mr. Peter Denmen, of Launceston, Tasmania, an island state in Australia.

Mr. Denmen called to my attention the 2-year-old pacing filly, Wolverina, who had just won a $30,000 Massachusetts Sire Stake at Plainridge in 1:54.4. For the record, Wolverina is owned by Michael Graffam and William Arnold, trained by Michael Graffam, and driven by Nicholas Graffam. Her win on Oct. 4 was her fifth win of the season, a record that speaks for itself.

That makes the filly inbred 2 by 3 to Western Hanover and also inbred 3 by 3 to Artsplace, as well as linebred 4 by 4 by 4 to Abercrombie. Wolverina to date has done all her racing on the Massachusetts circuit, but you have to think her potential could make her a threat where the lights are brighter. And afterwards, she will be a very desirable broodmare.

Wolverina is just one more example of the synergy close breeding can produce. For those wanting a definition of synergy, think two plus two equals seven. I also have to thank Mr. Denmen for sharing his knowledge with me. Clearly, a distance of a great many miles is no barrier to his knowledge of American racing and breeding.

This kid also had the pleasure of a brief conversation at the sale grounds with one of my long-time friends, Myron Bell. Myron and I pretty much talked past each other on the subject of a sire’s importance in a yearling’s pedigree.

To be clear, I do think the present format of sales pedigrees pays short shrift to the yearling’s sire when all he gets is a mention of his name. However, Myron’s certainly right that a yearling’s maternal line is the essential element in evaluating a yearling’s desirability for purchase. It’s also the determining factor in evaluating any mare, whether for breeding or racing purposes.

The only category in which the pedigree is irrelevant comes when evaluating a horse’s future sire potential. This is heresy to many, but as far as Jim Harrison and this kid are concerned, each stallion is an entity unto himself, and his pedigree contributes nothing.

Now we are again getting into the subject of the phenotype, or the visible horse, versus the genotype, or the horse’s genetic makeup. There is no way to know with any certainty whether a stallion will be a sire or not, but for me, and the great Italian breeder, Federico Tesio, the best indication we have is two-year-old brilliance on the track.

Until now, I have used the example of Muscle Mass, who was a stakes colt at 2, did bupkes at 3, and is one of the best sires out there today.

But now there’s an even better example in Walner. At 2 he was invincible, winning everything, including the Breeders Crown by open lengths. He was the unquestionable Two-Year-Old Trotting Champion.

However, at 3, Walner made only two starts, and that was all she wrote. And today, with his first crop racing at 2, Walner is the leading money winning sire. Which his great racing record at 2 clearly foreshadowed.

Here, a personal note regarding a great sire. When Muscle Hill was laying up at the Red Mile as a 3-year-old, his groom was good enough to lead him out so I could get a good look at him.

What I saw, and still vividly remember about Muscle Hill, was his beautiful, sculpted head, his full, bright eyes, and the way he used his ears. That, and his great race record, was all I needed to know about Muscle Hill to feel he would be a top sire, and I was right.

More recently, when I mentioned to a fellow breeder that I liked Captain Corey as a sire prospect, he replied that he didn’t like the way he stood. Any horse who can win the Hambletonian wire-to-wire stands just fine in my book.

A quick digression back to the pacing filly, Wolverina. I’m designating her as the first winner of the annual I’m My Own Grandpa award. For those unfamiliar with this great piece of American music, I’m My Own Grandpa goes through innumerable verses detailing complicated family relationships until it finally produces the song’s title. I would have liked to print the song’s lyrics in this space, but there are just too many verses. In any case, Wolverina is now the first winner of this award, and in all seriousness, I wish her and her connections all the best, along with my congrats for having come up with such a good filly.

Now, off to the sale, with fingers and toes tightly crossed. And in the plagiarized words of The Godfather, keep your friends close, and breed your mares closer.

N.B. If anyone has a question or wants to suggest a topic, please don’t hesitate to contact me at AJL@walnuthall.com.