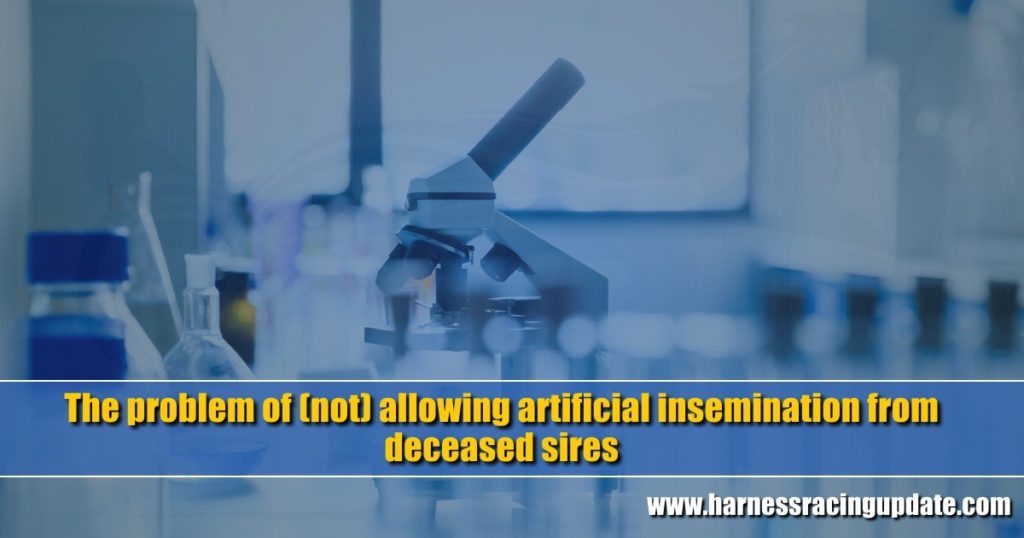 The problem of (not) allowing artificial insemination from deceased sires.

Steelhead Hanover (p, 5, 1:48.3; $577,450) stood almost one season at stud, resulting in 25 live foals from 32 mares bred. Sadly, the Bettors Delight son would not survive an emergency surgery and was humanely euthanized in May 2017, before some offspring were even sired. Yes, you read that correctly.

Twenty sons and daughters of the single-season Meridian Farms stallion would make it to the races, with his sons making particular impact. Every Maritime track record for 2-year-old male pacers is currently held by a Steelhead Hanover gelding; four regional track records for 3-year-old geldings (and one all-age track record) are also owned by his progeny.

Dr. Martha Annie Mellish works in equine theriogenology at the Atlantic Veterinary College in Charlottetown, PEI. She is a 2005 AVC graduate with additional specialized training in reproductive medicine. Familiar with Steelhead Hanover, she is a proponent of extending a stallion’s reproductive life through artificial insemination (A.I.) using frozen semen.

“It is something that requires closer veterinary management around the time of breeding if you use frozen semen,” she said. “It is a very good option for mare owners… For the stakes program in PEI, the stallion has to have been alive in the last year for [his frozen semen] to be used posthumously. The foals are the same genetics as if from stallions that were alive.”

Whether a stallion dies, is injured or gelded, or is geographically inaccessible, his fresh semen can be cryopreserved for the future. (Epididymal collection even allows for semen to be retrieved immediately post-mortem). Mellish said additives and liquid nitrogen keep it viable in a glass-like form.

“That’s how it’s held in suspended animation until it’s time to breed the mare,” she said.

“It just doesn’t live as long in the reproductive tract because it’s gone through the process of being centrifuged and being processed and then it’s on liquid nitrogen,” said the veterinarian, who works with broodmares undergoing the process at AVC. “It should be used within six hours of when the mare has ovulated, so you check them every six hours… Somebody will bring their mare in close to the time of when she needs to be bred, and then we will actually ultrasound them every six hours through the night, so that we can precisely time when they’re being inseminated.”

Standardbreds are just one of the breeds whose registries permit artificial insemination with frozen semen and registration of the resulting foals. Mellish said it’s not uncommon.

“We bred over 35 mares this spring at the [veterinary] school with frozen semen: quarter horses, warmbloods, arabs. A lot of different breed registries allow it.”

Although she estimated that it’s roughly double the cost of A.I. using fresh or chilled semen, there’s definite demand for A.I. with frozen semen from specific stallions, usually non-shuttle horses at stud internationally.

Offspring of a deceased sire don’t face sales-ring stigma about that fact.

“If anything, they’re more valuable because they’re harder to get,” said Mellish. She told HRU that although frozen semen is “good for at least 20 years after” it’s preserved at -196 degrees Celsius, it does result in “probably a 20 per cent lower conception rate” that varies by the individual horse.

“Some stallions are just as fertile with frozen as with fresh or shipped, cooled semen, and then some stallions don’t freeze very well at all,” she explained, adding that these tendencies tend to run in families, but not always. “A lot of the time, you have to freeze it, thaw a bit of it out and actually breed the mare, see how it does.”

Posthumous use of frozen standardbred semen poses a conundrum. Mellish observed that prohibitions aren’t based on biological or technological limitations.

“There are no scientific reasons that I know. You know, there’s [also] no real reason why a mare couldn’t have multiple foals in a year using embryo transfer, but it’s restricted by the breed registries and I guess there must be an economic reason for that.”

Preventing a single, popular stallion from monopolizing a breed’s gene pool is one argument for not allowing a deceased horse’s frozen semen to be used indefinitely after his death. “I guess that potentially could be a risk, but you do hope that breeders would see younger stallions, newer genetics coming up, as better,” she continued. “That you would allow the breed’s genetics to progress. We certainly haven’t seen [monopolies by deceased sires] in other breeds that do allow the indefinite use of frozen semen.”

The limited time window for using frozen standardbred semen raises more questions when a promising young sire’s career ends prematurely. Mellish said she would like to see a longer time frame in which the horse’s semen can be used.

“Absolutely. [Steelhead Hanover] was a younger stallion, so he didn’t have progeny performance before he passed away, and you don’t know how they’re going to perform, right? But say we were allowed to use frozen semen from him and we had a bank of it, if this rule was in place, you could have that as an insurance policy.”

She agreed that Somebeachsomewhere (euthanized in 2018) and Cam Fella (gelded in 1997 due to testicular cancer) are others whose direct, cryopreserved genetic contribution would remain popular if the rules allowed for it.

They usually do not.

In the USTA rulebook, section 26.05 states that while foals “conceived by transported fresh or frozen semen shall be eligible for registration,” their sire must be a living or recently-deceased stallion: “In the event of the castration or death of a stallion no foal conceived by semen from that stallion in a year after said death or castration is eligible for registration.” Ontario rules specify that for foals to be considered Ontario-sired, “frozen semen must be used in a year that the stallion is registered with the program. If the stallion dies during a breeding season, the frozen semen can only be used to finish that breeding season.”

In PEI, there’s no shortage of quality trotting or pacing stallions. This keeps demand for frozen standardbred semen lower than for horses without this local advantage.

“It certainly is growing in other breeds, from what we see,” said Mellish. “This is in the category of advanced reproductive techniques, ART, and that is only growing around the world. Embryo transfer, frozen semen breeding, or what is called ICSI [intracytoplasmic sperm injection] breeding in horses [i.e. fertilizing the egg outside the mare]. That’s rapidly expanding in the rest of the world.”

It seems that tradition and economics, not science, are the rationale for frozen semen being unusable long before its biological expiry date. Case in point: Although originally frozen to meet demand for export in his lifetime, Trakenher stallion Abdullah’s cryopreserved semen was still in use more than a decade after the 1984 Olympic showjumping champion’s death in 2000.

What about the descendants of Hambletonian 10? Should the usable lifespan of frozen semen continue beyond the death of the sire?

“I wouldn’t have a reservation about that at all, honestly, and I think it does open up the possibility for deceased stallions to be used to allow for the best matching between mares and stallions,” said Mellish.

Sunday (Oct. 10) at Red Shores Charlottetown, when the Atlantic Breeders Crown 3-year-old colt pacing final goes behind the gate, four of the seven starters will represent the late Steelhead Hanover. His genetic legacy is likely frozen in time: Like all but two of his male offspring, top sons Woodmere Stealdeal, Dustylanegoliath, Steel Reefer, and Jadensmagicsteel are geldings.