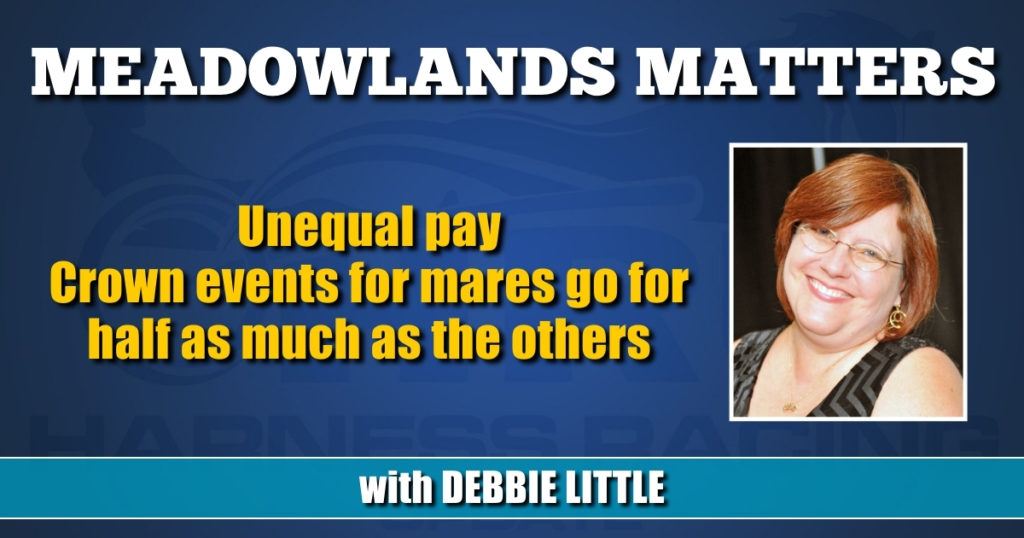 Investigating why Breeders Crown events for pacing and trotting mares go for half as much as the other Crown events.

At the end of September, the Hambletonian Society announced that they would be adding $600,000 to this year’s Breeders Crown purses by adding $100,000 to the finals for all four sophomore events as well as the Open Pace and Open Trot.

“We have some excess money to put into purses for the Breeders Crown this year,” said John Campbell, president and chief executive officer of the Hambletonian Society. “And the process is that it goes before the Breeders Crown committee of the Hambletonian Society and they determine where that money goes and that was their decision. At this time, we’re in a position where we’re comfortable raising those purses and not having a detrimental effect in the next year or so on them, so it’s a year-to-year thing in that regard.”

Rather than focusing on the Breeders Crown committee’s benevolent act, some took to social media to question why no love was given to the mare pacers and trotters. With the increase this year, all Finals will go for $600,000 except the mares who will each race for $300,000.

The owners of some of the top mares would have appreciated a slight bump in their purses as well, but recognized that the issue is not with the Breeders Crown that offers one of the top mare purses in North America. The problem, instead, is with the industry as a whole that, just like all other professional sports, rarely offers equal pay to females.

“It’s always been that way,” said owner Howard Taylor. “When [Buck I St Pat] was around, she was racing for half of what the boys were, that’s why with Atlanta we go with the boys. I guess you accept that it is what it is but it’s such a difference, it’s just not fair. If it was a little less, I’d say okay, but a lot of the mare races go for a lot less than the boys.”

It was explained that the Breeders Crown Mare Trot traditionally goes for less money in the hope that top trotting mares, such as Atlanta and Manchego, would choose to race in the Open Trot against the guys thus pitting the top trotters, regardless of sex, against each other. Some have tried but only three have won, the last being Hannelore Hanover in 2017. Prior to that it was Moni Maker in 1998 and CR Kay Suzie in 1996.

It’s been even worse for mare pacers. The last one to race in the Breeders Crown Open Pace was Put On A Show in 2012, who finished last, beaten 10 ¾ lengths.

“She tied up that night and she was no good,” said Put On A Show’s trainer, Chris Ryder. “She wouldn’t have beaten the mares that night.”

Taylor has owned both pacing and trotting mares and knows there’s a difference when it comes to competing against the guys.

“Lyons Sentinel, arguably, could take on the boys but she’d be the only one,” said Taylor. “I have Peaky Sneaky, who’s a top-five mare, I think, and I wouldn’t even consider that.”

Lyons Sentinel, a 4-year-old mare pacer, is trained by Jim King Jr. and owned by Threelyonsracing, which is comprised of Geoffrey Lyons Mound and his two sons, Joseph and Geoffrey. She currently sits at the top of the Hambletonian Society/Breeders Crown weekly Top 10 Poll.

“In your 4-year-old career, you’re racing against 5-, 6-, 7-, 8-year-old mares, so that’s difficult enough, and then to go against aged boys is another level again,” said Joseph Lyons Mound. “We’re lucky, we’ve got a nice amount on our card this year, but if it was the same caliber of money as a 3-year-old, we’d probably be hitting a million already, so there’s a difference.

“This year we paid into maybe eight [stakes], whereas as a 2- and 3-year-old, you could pay into maybe 20. They don’t do anything to keep you racing. It’s not as if they’re trying to keep you in the sport longer. They’re really trying to put you to the sidelines breeding from the looks of it.”

King Jr. knows quite a bit about racing top mares, such as Horse of the Year Shartin N, but when it comes to pacing mares taking on the boys, he’s not currently in favor of it.

“Even if they win it takes a big toll on them,” said King Jr. “I’ve seen it repeatedly and even if they get it done that night the after effects don’t make it worth it, in my opinion. If I had [Lyons Sentinel] as a trotter, I’d feel differently about it.”

Dave McDuffee, owner of 2021 Hambletonian Oaks champ Bella Bellini, currently plans to breed her next year rather than bring her back at 4.

“Four is a tough, tough year to race any horse, whether it’s male or female,” said McDuffee. “I feel bad for 4-year-olds. If there were more 4-year-old races with good purses, I know for a fact that good mares that we had that we quit with at 3 we would have kept on for another year.”

Part of what could contribute to the Crown mare purses being less is the fact that less than half as many females are Crown eligible at 4 than at 3. They also have fewer and lower payments than their male counterparts.

On a positive note, the fact that the Breeders Crown offers the exact same purse to 2- and 3-year-old males and females is unique and refreshing and something that others can hopefully use as an example moving forward.

“There was a lot of discussion on what to do with [the money],” said Campbell. “It wasn’t a question of not giving it to the mares, it was just a question of where it would go and that’s where we fell. As far as keeping mares on the track, 4 and up, it’s going to take a series of races throughout the year for that to come to fruition. It’s not going to be just for one race.”