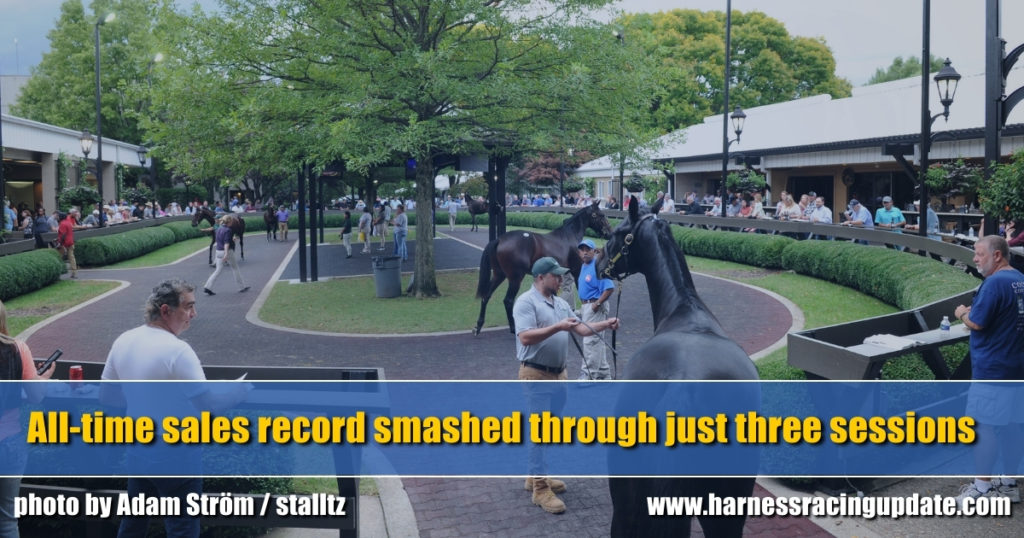 With two sessions still left to go, the Lexington Selected Yearling Sale has already surpassed the previous record for gross with $46.6 million in total sales thanks to a record-breaking third session on Thursday night.

The records keep on coming at the Lexington Selected Yearling Sale. Just how strong a sale has it been? Through three nights, the auction has already surpassed the previous best for total gross it took five nights to reach in 2019.

Thursday’s (Oct. 7) auction set a record for gross ($10,169,000) during a third session that is more than $2.5 million higher than the previous best for night three. Thursday’s auction also set a new high-water marker for number of yearlings sold for $100,000+ both for a third session (20) and through the first three sale nights (150).

“It goes back to what (sale co-manager) Randy (Manges) said back when we were taking the entries, ‘We’re putting a catalogue out that’s deeper than it had been in the past,’” said fellow sale manager David Reid. “We felt coming in, and it was well publicized, that we had a strong catalogue and here we are through the third night breaking the record from 2019, which was a record from when we sold two horses for a million dollars.

“It goes back to the depth of the catalogue and the diversity of the sires. Just looking at the sire totals here. Walner leads the way at $7.7 million, then there’s Captaintreacherous ($6.65 million), Muscle Hill ($5.26 million), Chapter Seven, Father Patrick, Sweet Lou, Tactical Landing, Always B Miki – they’ve all sold offspring for over $2 million here.

“Then you come in here tonight and Bettors Delight had a big night. He’s at $1.7 million and you’ve got American Ideal, Stay Hungry and Huntsville. I mean, we haven’t seen a sire list like this in a long time.

“It just shows the strength, but, there again, it’s not one reason, it’s multiple reasons – the depth of the sire power, the increase in the programs, the foal crop is maintaining flat – I just think there’s a lot of positive reasons. I said last week that I think it’s a good time to be buying horses. The economy has been rolling along, despite the pandemic. The thoroughbred sales have been pretty good. I just think everything is clicking on all cylinders right now and it all contributes to the success of this sale, there’s no doubt about that.”

Thursday’s session-topper was hip 460 Fout, a Bettors Delight colt out of Weeper purchased for $250,000 by Ben Wallace, agent for Daniel Plouffe, from the Winbak Farm consignment.

“He stood out as far as conformation and he comes from the immediate family of speed,” Wallace said. “I though with that combination we were on the right track. You never know what you have to pay for them, but I’ve got an exceptional owner, Danny Plouffe, that’s been with me for years on and off, we’ve won a Triple Crown together (with Blissfull Hall). I guess he remembers that and he wanted that colt, so we went ahead and bought him.

“I think people still want racehorses. That speaks to what winning horse races is all about. The thrill of winning a horse race is sort of shown in how much people want to buy one and be part of that mix. I think it’s holding up very well. The afternoon sessions seem to work good and it reminds me of the old Tattersalls sessions where we bought and sold horses in the afternoons.”

As for going to $250,000, Wallace said, “we were getting pretty thin. We were prepared, I suppose, if we had to (go higher), but I’m glad we didn’t have to. That’s trying to protect some people’s money I suppose, but that’s just the way it is. I have no clue who the underbidder was, but he was aggressive, because from 150 on, I think it was just myself and him. Time will tell, but right now I feel fortunate we were able to get him.

“Anything over 100 grand is a lot of money. I know you were going to have to pay for this one. Ontario offers a great program, and certainly Bettors Delight has shown that he can compete at any stage. So it’s nice to have a sire stake colt in your pocket and we’re hoping that the Grand Circuit will be an option, too.”

Doug Overhiser of Illinois was particularly active during Thursday’s session. He led all session buyers with $599,000 spent, in all, on seven yearlings. Through three nights, Overhiser has spent $1,051,000 to take home 14 yearlings. Notable among his Thursday purchases was hip 364 Morning Edition, a Walner colt out of Morning Glow that lost one eye as a baby that he bought for $145,000.

“He was destined, if you look at him, to be a $400,000 yearling,” said Art Zubrod of Brittany Farms which bred Morning Edition. “He lost an eye shortly after he was born. He still looks the part and he trots the part in the paddock.”

Overhiser said he would love to have one of his purchases end up being a Grand Circuit winner.

“Obviously, that’s the goal. The one we bought tonight, the Walner colt with one eye, what a story that would be if he hit the Hambletonian? I believe in stuff like that, fairy tales,” Overhiser said.

Overhiser also bought the second most expensive yearling sold Thursday when he spent $210,000 to purchase hip 516 Shes A Lady, a Captaintreacherous filly out of My Lady Love from Brittany.

“The first night is kind of tough, right? You try and find value. (Thursday), there were a couple of horses that we targeted coming into the sale, so that’s probably why we’ve been more active. The first night is when you want to be more careful. The ones we did get the first night, I thought we got really good value. We kind of knew coming in that the third night would be when we’d go hot and heavy on them,” Overhiser said.

“I want to have fun and maybe make a little money or, at least, not lose too much money. My family raced harness horses back in the ‘80s. They got out of it, things didn’t go well and I always said if I ever got to a point in my life when I could get back into it I would. A couple of years ago, Jeff Davis introduced me to some folks and things have gone from there. Luckily, I’m at a point in my life when I can afford… a little disposable income and have a little fun and see how it goes.

“I always was a spectator for the last 30 years. I went into the military for a while, worked for different companies and opened up my own busines about 10 years ago – I have a nice, strong, thriving trucking business in Chicago. A couple of years ago I just finally made the plunge. I made some phone calls. Almost everyone I knew from the ‘80s was no longer in it… of course, I was just a little runt back then. Everyone I knew was kind of gone.”

Overhiser said the majority of his yearlings will go to Erv Miller.

“Erv is the main guy,” Overhiser said. “Jamie Macomber, Ricky Macomber, they are also awesome at their jobs. And Rob Rudolph out of Chicago, but Erv does 95 per cent.”

Overhiser said he doesn’t expect to buy too many more yearlings in Lexington this year.

“The prices and the horses available will determine that, to be fair, but we’ve probably come close to the end. Now, my focus will turn to Indiana, going to the Hoosier Classic and we’ll see what happens when Harrisburg comes around, once everything shakes out from this sale, for what we may want and need,” he said.

“The biggest thing that we took into account this year, and I think a lot of folks have, is the dual eligibility in Kentucky. They have put a lot of money into that program for next year and that’s exciting for the business.”

“Very solid. I haven’t looked at all the numbers, but we had a good clearance rate. It just seems like things are rolling along pretty well. We had a mix of pacers and trotters, fillies and colts, and I’m satisfied,” Reid said. “There’s always bumps in the road, but generally speaking there’s been very few bumps. There’s some at every sale, but I’m pleased and, for the most part, all of our clients are pleased as well and that’s ultimately what makes the difference.”

Anvil and Lace Farm, which led consignors by average during the second session, has a solid average of $104,154 through three nights.

“That’s phenomenal, I’m speechless,” said Anvil and Lace’s Beth Yontz. “I never thought I’d have that quality of horses that early on. We’ve been out on our own only since 2015 with the farm, so 2016 was the first consignment. (The sale) is better than expected. It’s been good. We’ve been good a couple of years and then it comes in now and it’s just fireworks.”

“No disappointments, whatsoever. Surprises? Just pacing fillies in general, in my own consignment and in others. Normally, pacing fillies brought in the bottom end in years previous. This year, it’s been the complete opposite.”

Through three nights, pacing fillies are averaging $84,781 which trails only trotting fillies ($95,154).

After two straight sessions that started at 3 p.m., tonight (Oct. 8) and Saturday will return to 7 p.m. start times after the afternoon races at the Red Mile.

“The new (afternoon) format was very encouraging,” Reid said. “I asked a lot of people and then I talked to the consignors as well, trying to get a broad base of opinion of it and I haven’t heard any complaints. We are always conscious of getting people out of here at a reasonable time. Tonight we had a much better pace and got done a little earlier.”

The session ended just after 9 p.m.