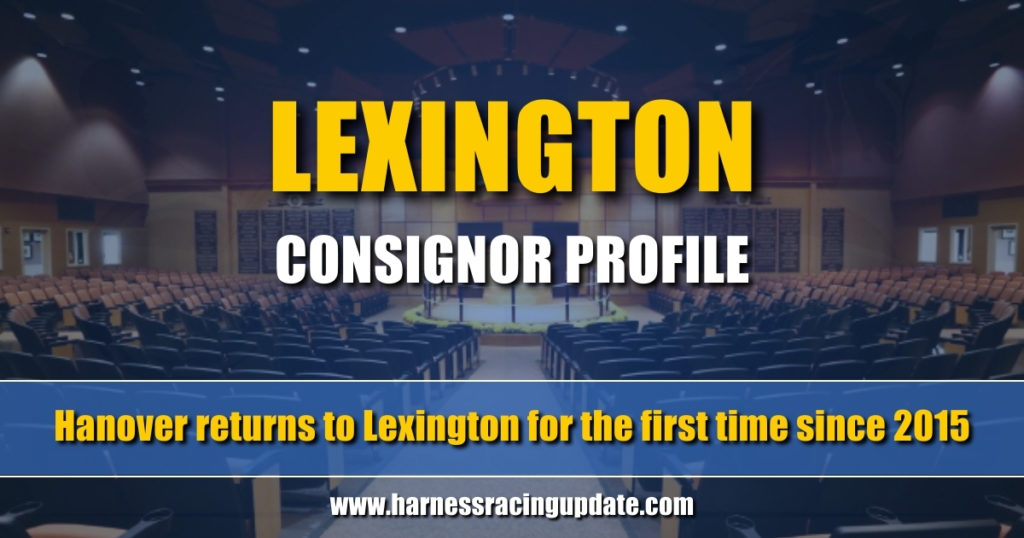 Hanover returns to Lexington for the first time since 2015

The sport’s leading breeding farm is selling a select group of 20 yearlings in Lexington that Dr. Bridgette Jablonsky said is “a really a special group of horses.”

It’s been six years since Hanover Shoe Farms sold some of its yearlings at the Lexington Selected Yearling Sale. That’s understandable since the famed Pennsylvania farm also operates the Standardbred Horse Sales Company that sells its yearlings Nov. 8-10 in Harrisburg, PA.

Hanover’s executive vice president Dr. Bridgette Jablonsky said the timing was right for a return to the Lexington sale for the first time since 2015.

“I think for Hanover it’s really best to put the product where it can be best received,” Jablonsky said. “Yes, there is the very valid reason that Hanover and Standardbred Sales Company are very much intertwined, but you have to make the best business decision for each company separately, I think.”

Hanover has brought a select group of 20 yearlings to Lexington.

“We handpicked these 20… it’s really a special group of horses, in my opinion. They’d be 20 of the best yearlings that we brought to Harrisburg. That’s not to say that we don’t have plenty left for Harrisburg, but they are very good horses.”

“There’s some really high-profile trotters among that group and it kind of makes sense to me to bring them to the people that are most likely to buy them,” Jablonsky said. “That’s not to say that people aren’t going to buy them in Harrisburg, but… it’s really no secret that these top-end trotters, these real high-end trotters, they tend to do a little better at Lexington and that’s because the people buying them are at Lexington. There’s no question that when the people that are spending the money are actually at the sale, they will bid more than if they are just being represented by somebody. They are often there because of the races… Harrisburg has lots of great qualities and lots of good points, but one thing they can never do is offer that whole racing experience. We know that.”

The fact Hanover stands so many stallions and has so many mares means it often sells many horses from the same sire at Harrisburg.

“I feel like we compete against ourselves at Harrisburg a little bit,” Jablonsky said. “We have so many yearlings and so many by the same sire… if people don’t get the first great Captain colt that goes through the ring, it’s okay because we’ll have another one coming or another one.

“If you take a few out and put them in Lexington and not in Harrisburg competing with those, it’s just supply and demand and kind of evening that out a little bit, I think.”

Jablonsky said it was also important to showcase a few of the yearlings it has from the first crops of Hanover stallions — this year led by Stay Hungry and International Moni.

“I think it’s very important next year with the Greenshoes that we offer some of them at Lexington, that the first look people get, the first offerings, include the Hanover Greenshoes.”

Jablonsky said she’s also high on hip 73 Hanna Too Hanover, the full-sister to 2017 Horse of the Year Hannelore Hanover.

“She’s a beautiful filly. She’s got a great attitude. She’s very reminiscent of Hannelore, maybe a little smaller than she was as a yearling, but she looks very similar to her,” Jablonsky said.

“Trotting colts, we have a Walner half-brother to Perfect Spirit, who won the Hambletonian. He’s hip 67 (Gates Hanover).

“Pacing filly-wise, we have hip 24 (Bellisima Hanover), a Captain filly out of Bedroomconfessions, whose first foal Boudoir Hanover is doing quite well this year.

“Also, we have an Always B Miki half-sister to Fire Start Hanover (hip 63 – Falana Hanover), who is a big, strong filly just like Fire Start was.

“We have a Chapter Seven first foal from a sister to Atlanta (hip 56 – Cecil Hanover).

“Then, along those lines, we have hip 34 (Canterbury Hanover), who is a Chapter Seven first foal from Charmed Life, who was a great race mare.

With such a strong lineup, Jablonsky was reluctant to mention one as a value pick, but she said Hip 199 – Declan Hanover is an “International Moni first colt from the dam of Darlene (Hanover) and Delilah (Hanover) and he trots beautifully.”