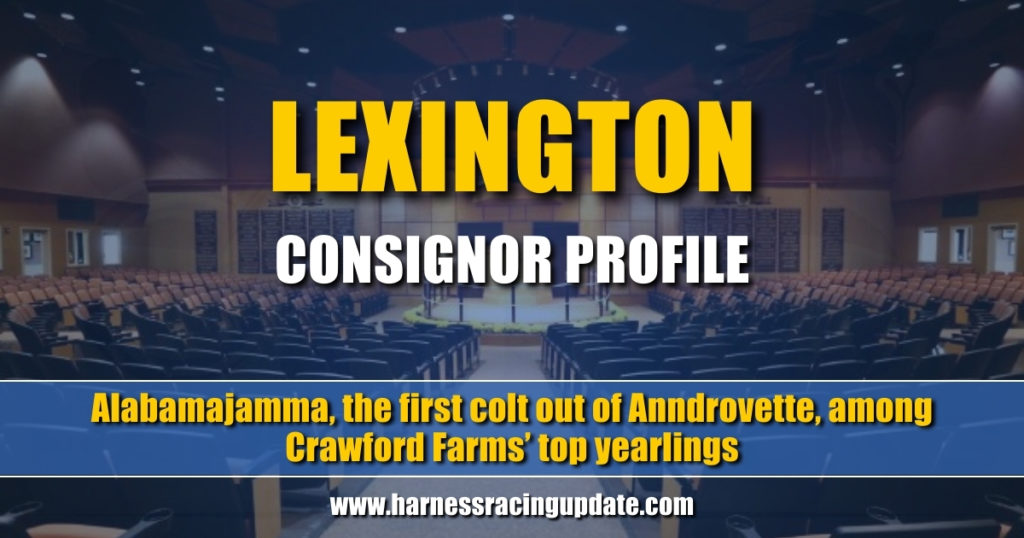 Alabamajamma, the first colt out of Anndrovette, among Crawford Farms’ top yearlings

At the 2018 Lexington Selected Yearling Sale, Crawford Farms of Syracuse, NY sold the eventual Hambletonian-winning filly Ramona Hill for, what in hindsight appears to be a meagre $70,000. Michelle Crawford said a full sister to Ramona Hill won’t be a yearling until 2022, but she believes the 52 yearlings her farm is selling in Lexington this year are, “a solid group” from the largest consignment it has ever offered.

“I think it’s going to be solid because the individuals are very, very nice individuals. It’s exciting because you’ve got the first crop of Tactical Landing, Stay Hungry and, for us personally, Crazy Wow, and they are amazing looking animals… I think across the board our individuals will sell well.”

Crawford Farms raced Crazy Wow and stands him at stud at its Kentucky farm.

As far as other yearlings Crawford is selling this year from first-crop sires, they have an impressive Stay Hungry filly selling early during the opening session.

“That individual, she’s amazing looking. She’s out of All About Kisses (hip 10, Hungry For Kisses). She is a big, strong filly,” Crawford said. “Then, also on the first night, there’s the first colt out of Anndrovette (hip 79 Alabamajamma). She’s had two fillies, Nashville Elgenna was just fifth in the Jug. She’s really shown up. The 2-year-old full sister (Hamptons Babe), she’s a stakes winner in 1:53.4 over Saratoga… She’s two-for-two right now.”

Asked who gets the credit for naming Alabamajamma, Crawford laughed.

“That would be me,” she said. “It’s just the song (the University of Alabama’s Rammer Jammer cheer). Just love it. I have to be honest, I was a little exasperated with the naming game. I did a few right out of the gate and then (Crawford farm manager) Heather (Reese) said, ‘I’ll take it over’ and then by the end of it she said, ‘Don’t ever ask me to do that again.’”

The other pacer Crawford said she loves is hip 205 Captain Q, a Captaintreacherous colt out of Agent Q.

“He’s one that I’ve watched most, probably, along with Alabamajamma, but they are very different individuals. This guy, I’m not sure he looks like a typical Captain, but, wow, does he go. He’s just really, really amazing.”

As far as trotters, Crawford mentioned they are selling, “the last Muscle Hill that will be at public auction out of Spellbound Hanover (hip 189, Mystic Muscle), and he’s stunning. He went down the chute and I absolutely loved his video. I loved him. He’s probably one of the nicest individuals out of the mare and I think he’s something special.”

Mystic Muscle is a full-brother to 2016 Hambletonian winner Marion Marauder.

Sticking with Hambletonian connections, Crawford is also selling a filly out of Define Royalty, a sister to 2013 Hambletonian winner Royalty For Life, hip 44 Royalty Tabs.

“That one out of Define Royalty is drop dead,” Crawford said. “You look at her and she’s prototype. I mean, she’s big, she’s beautiful… She’s a stunning individual. People that come to see her just stop dead in their tracks. She’s actually got a Greenshoe, too, on the ground.”

On the final night of the sale, Crawford is selling a What The Hill filly, hip 762 Cinderellabutnot, “that has a little attitude… and is one of most stunning, athletic What The Hills I’ve ever seen.”

As for value picks, Crawford selected a couple sired by Crazy Wow.

“I think our sleepers are out of Whimzical Britt (hip 593, Whimzical Wow) and Naughty Nana (hip 535, Naughty Wowser). I think they could be anything. That’s just my personal opinion.

“With us, as far as us standing (Crazy Wow), we wanted to throw him some good mares to give him a shot first year, obviously, so we did give him some good mares. I will tell you, they all look different, but they are all stunning. Some of them are really huge and beautiful. They look just like him… I don’t think there’s going to be a huge price point on them, but I think people will be interested in them just based on how they look and how they are conformed because I have never seen a more perfect foal that they’ve thrown out of these mares. Every mare has thrown a really nice foal. Very correct.”