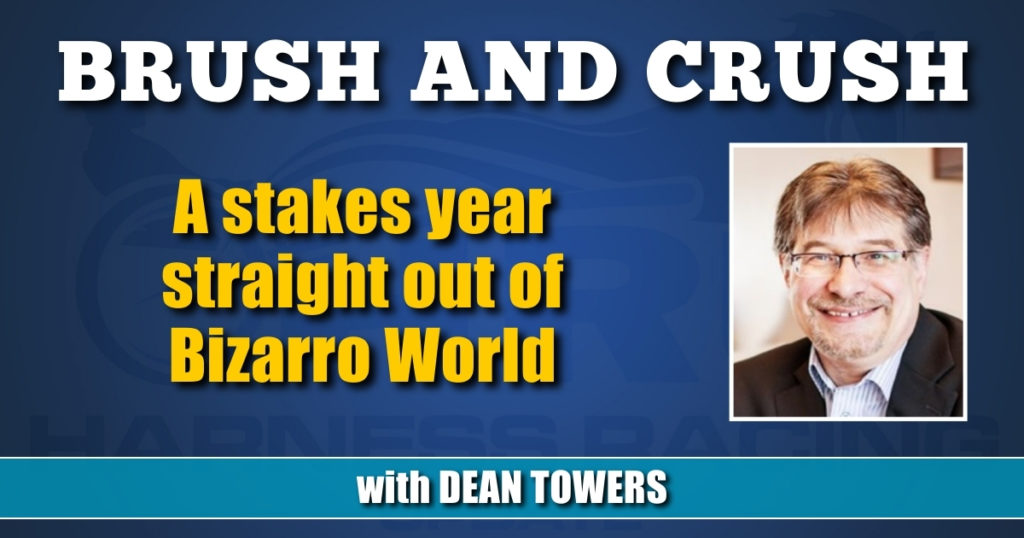 A stakes year straight out of Bizarro World

We all knew last year would be nuts, but so far, the 2021 COVID-19 stakes seasons has been filled with the weird and unpredictable.

In the 1970s, a Japanese professor named Masohira Mori coined the term “uncanny valley.” It referred to robots that began to look more and more lifelike. Mori postulated that there comes a point (a valley) where these robots are so real looking, we get a strange sense of visceral uneasiness; something just doesn’t feel right about the whole experience.

I’m not sure about you, but for me this whole darn COVID-19 stakes race season has done just about the same thing. It feels real, the races are similar, but wow, there is something not quite right.

In the spring, training horses down and making appropriate stakes payments was a minefield with lockdowns and capricious jurisdictional rules. And it probably showed, as scheduling and planning were thrown for a loop; so much so, last year’s superstar pacer Perfect Sting had to race in an overnight against older to keep sharp for the Meadowlands Pace.

Speaking of the Pace, a downpour developed, an $800,000 pacer stepped out of his rigging, and a feel-good Ohio-based colt won the race, only to not win the race. To add to the temperamental scenario, the time was ticking on the Fox Sports telecast where people who tuned in might not even know who the winner was.

For the older pacers, things feel pretty uncanny. The hottest free-for-aller in the sport – Allywag Hanover — is not only a 4-year-old, but a horse that was in the July Meadowlands sale, only to be pulled out late. Who’d have guessed that?

As vaccination rates rose, and travel was less restricted, the Grand Circuit races at Mohawk were sure to return things to normal. At least we thought. But there too this tumultuous season seemed to rear its head. U.S. drivers – and this is fairly new I think – jet-setted in and out of Mohawk to race some nights and afternoons elsewhere, and the plethora of U.S.-based horses didn’t fill the box.

The Metro – the 21st century answer to the ‘80s Woodrow Wilson – did not even have eliminations and the race itself was a curious one. Atlanta versus Manchego (twice!) were non-events at the Campbellville oval as both mares were not themselves. That’s happened, well, never.

I haven’t even mentioned the North America Cup, where if it racing in September wasn’t enough of the uncanny, the local favorite threw in a rare clunker and Meadowlands Pace champ Lawless Shadow was a late scratch. At least we had the awesome story of Desperate Man.

Just this past week over the usual sunny skies of Ohio, the Jugette card was under a deluge, and the next day the colts and fillies were racing on a track about five seconds off. Thankfully, the Jug final did deliver, but not seeing Charley May race in the big event in front of local fans was another wrench into the 2021 stakes season we’d like to have avoided.

Stakes season is not over. The Red Mile is upon us and the Breeders Crown is a super event. Harness racing is never predictable and it always lends itself to great stories. Plus, a harness racing fan’s concerns is a pimple prick on a grain of sand when it comes to a serious issue like COVID-19. But I can’t get this uncanny year out of my head. Here’s hoping 2022 brings us some normal again.