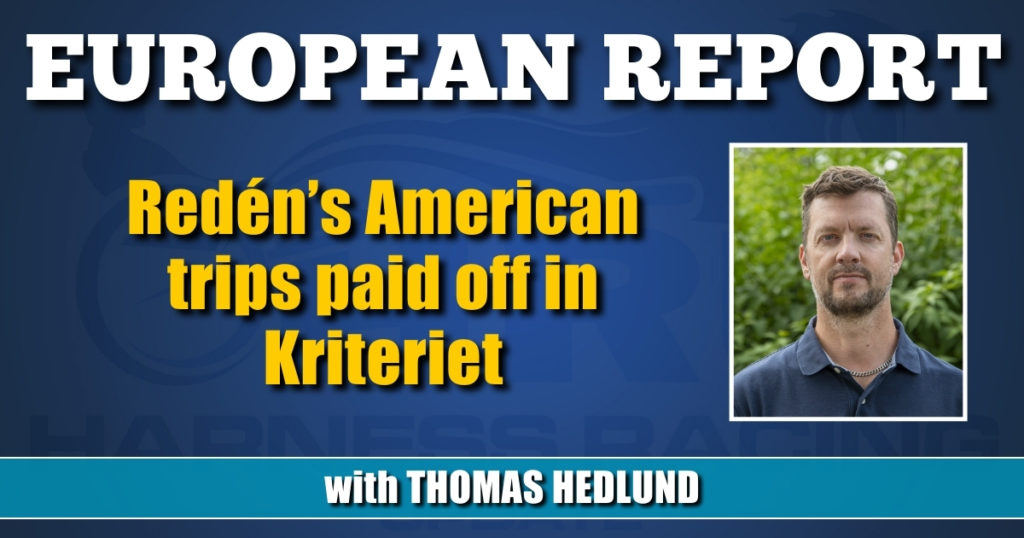 Once upon a time in America, Swedish trainer Daniel Redén found a horse that later would change his career dramatically. Shaq Is Back (Credit Winner—Vivica Hall) came from a good 3-year-old season in Ray Schnittker’s training when he was purchased by Redén and Brixton Medical AB in Harrisburg 2010. Shaq Is Back would later be Redén’s first participant in Elitloppet at Solvalla (2013) and the noble Credit Winner son learned Redén a lot about how to race a horse in the European elite.

“Shaq Is Back was like a dream to drive and I was also very fond of his blood, with Victory Dream as the sire of the dam Vivica Hall,” said Redén.

The success with Shaq Is Back on Swedish soil resulted in new purchases in America and when full sister Shaqline (Credit Winner—Vivica Hall) showed up in the catalogue for the sale in Lexington 2013, Redén got the highest bid and Shaqline eventually ended up in Jimmy Taker’s barn.

When it was time for the new career as a broodmare in Sweden, Father Patrick became her first partner and the result is named Francesco Zet, now a 3-year-old and winner of Saturday’s (Sep. 25) $920,000 Kriteriet at Solvalla.

Francesco Zet was more or less outstanding in the 1.6 miles long race after a second over trip where driver Örjan Kihlström had to leave for a three wide attack as early as with a kilometer to go. Francesco Zet fought three wide outside of leader duo Kavatosåfin and Mister Invictus and when Kihlström pulled the plugs from his horse’s ears, Francesco Zet exploded and flew to safe win in mile rate 1:57.

“Francesco Zet is definitely top three among all horses I’ve trained so far in my career and he still doesn’t understands what this is all about. The most thrilling thing about this victory is the story with his mother, Shaqline. I would never have bought her if it wasn’t for Shaq Is Back and his career here in Sweden. I’ve said it before, Victory Dream is the blood I’m searching for and in Francesco Zet we have from both parents (Father Patrick and Shaqline),” said Redén after the prestigious victory.

Redén has now claimed the two biggest races at Solvalla this season since he won Elitloppet in May with another homebred trotter: Don Fanucci Zet (Hard Livin).

Behind Francesco Zet, big upset Global Cashflow was runner up ahead of Mellby Jinx.

Timo Nurmos had four shots when $640,000 Oaks for 3-year-old fillies was on Solvalla’s Saturday (Sep. 25) race card and one of them showed great strength and moral.

Lara Boko (Djali Boko), paired with Mika Forss hit the first over position after a quarter of a mile and when stable mate Senorita Tokio steered in front, the race was locked for the opponents.

Senorita Tokio was beaten at the top of the stretch and Lara Boko got advantage at the same time as horses attacked three wide with just the home stretch to go. Mika Forss could sit quietly in the bike as Lara Boko cruised to safe win in mile rate 1:56 over 1.3 miles.

Timo Nurmos’ other three horses in the race didn’t finish among the top six, still, the dominant trainer could be happy for his second title in Swedish Oaks.

“I’m proud over this horse. It’s not easy to win Oaks from position first over. My four horses did all well in the eliminations and I had some expectations that one of them would be successful in the final,” said Nurmos after the race.