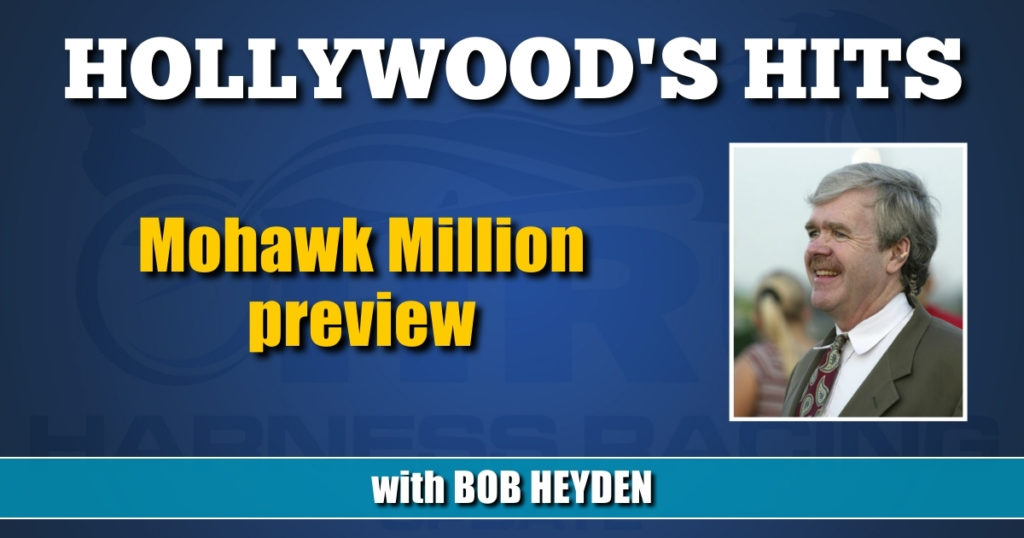 The Mohawk Million is now in its second year and will feature four fillies, three geldings and three colts.

Julie Miller won the inaugural Mohawk Million with Venerate. Steve Stewart bred last year’s winner and he looks to go back to back with Venerable.

If King Of The North wins, he will set the all-time earnings record for a freshman trotting colt surpassing Deweycheatumnhowe’s mark from 2007 of $936,191 — for the same stable (Schnittker). King Of The North comes in at $601,890.

Steve Jones bred Deweycheatumnhowe, a better than $3.1 million career earner. He also bred King Of The North along with Ray Schnittker.

Valentina Blu is from the breeders of Somebeachsomewhere: Spring Haven Farms.

Valentia Blu’s driver, Andy McCarthy, won the two richest races of 2020 including this one.

The inside four posts are all trained by a Hambletonian-winning conditioner: Ray Schnittker, Luc Blais (#1 and 3) and Tony Alagna.

If David McDuffee doesn’t already have the “Owner of the Year” trophy, he’ll be even tougher to beat if Venerable wins. If Venerable wins and remains undefeated it is dé-ja vu for McDuffee and Mel Hartmann. They were also on board for Bee A Magician in 2013 as the unblemished sophomore filly set the all-time earnings record for a single female trotting season surpassing Moni Maker in the Moni Maker stake.

Who will be the favorite? Only King Of The North and Dover In Motion have been favored in every start. Venerable paid $7.60 as second choice in her debut.

James Macdonald (The Mighty Hill) and Sylvain Filion (Mischevious Rose) will debut for the first time with their freshmen.

Brothers have never gone 1-2 in the same million-dollar race. James and Mark Macdonald have a chance.

Dover In Motion has won all six by a combined 27 3/4 lengths. (Venerable by 16 combined lengths).

Jamie Macomber won the 2017 Breeders Crown with Beckhams Z Tam over Downbytheseaside at her home track — Hoosier Park. No Indiana-bred trotter has ever won a million-dollar race. Dover In Motion, was bred by Lyle Slabach of Topeka, IN.

It’s been a quarter century since Shes A Great Lady and Jennas Beach Boy won the Breeders Crown in back-to-back races at the Meadowlands for the same connections — trainer Joe Holloway and owner L & L DeVisser.

Holloway is not in this year’s race, but his 2015 Breeders Crown winning Divine Caroline is the dam of Just Divine.

Nautical Hanover and Atlas Hanover are the two maidens in here. The purse is $824,000. The richest pot ever won by a maiden was this race in 2003 when Camelot Hall won.