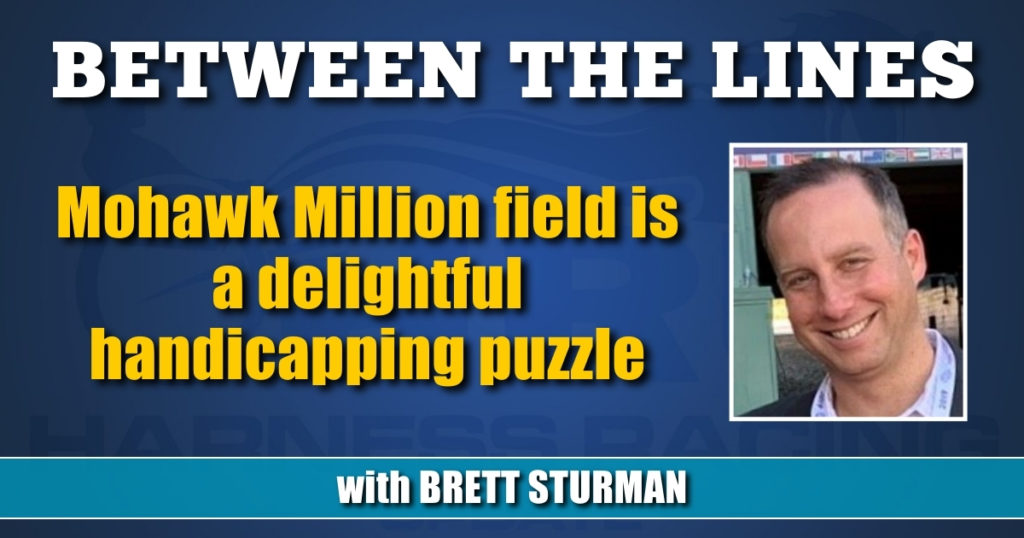 A year after a colt beat a favored filly in the inaugural edition of the Mohawk Million, the fillies have upped it even more this time around. Up from three last year, four of the 10 entrants in the Mohawk Million time around are fillies and it includes the sensational and unbeaten Walner filly Venerable going up against the once-beaten Walner colt King Of The North.

Top to bottom, the talent in this year’s field far surpasses that of last year’s, and there are parallels, as well. Last year, the filly Donna Soprano took favoritism over the colt Venerate, and in the end Venerate pulled off the mild upset over Donna Soprano. This year looks similar. King Of The North rates as the 5-2 morning line favorite with Venerable right behind at 3-1 and I can’t say who the public will end up making the favorite. If it were me, Venerable would be the favorite but I could see a colt from post two getting more traction than a filly from post nine.

VENERABLE is unbeaten and untouched and for all we know could be a generational type of trotting filly. Through recent years these 2-year-old trotting fillies have held their own against their male counterparts in the speed category and I doubt that driver David Miller is going into the race intimidated. Venerable made some decent filly trotters look ordinary throughout her entire freshmen campaign and I’m not prepared to go against her right now. KING OF THE NORTH is a tougher call. He made hard work of it in the Wellwood final last out despite a perfect second-over trip, but he was eventually able to push past nearing the wire to gain an automatic berth into this race. He could easily win, but his last two haven’t been as dominant as those wins at the Meadowlands were during the summer. DOVER IN MOTION reminds me of Swandre The Giant as a precocious looking unbeaten 2-year-old coming out of Indiana to face open company this time of year. I can’t add anything more than what you can already see on paper; anxious to see if he’s really this good. DULY RESOLVED was awesome when fending off Letsdoit S three back and almost just as impressive when it looked like he was going to hold off King Of The North two back, but then regressed last out in his Ontario Sires Stakes Gold race. He lost that night to STAR POWER HANOVER, whose race prior was a no-excuse third in a non-winners of 1 — go figure. SELFIE QUEEN is another filly capable of winning. A 1:51.2 winner three back at Lexington, she took a lot of action four back against Venerable in a race where she broke when stuck to the inside. Driver Andrew McCarthy won this race last year and his chance this time is VALENTINA BLU; seems like a stretch to win but could land a piece.

James MacDonald did the job last week subbing in for Tetrick on LYONS SENTINEL as she won impressively with minimal effort. She wasn’t asked until right before three quarters when she left the inside for the first time in the race and went by the leaders in no time; there’s not any real reason to go against. For MacDonald, it’s back to SO MUCH MORE who had the misfortune of landing post 10 for the second straight major final. She was actually very good in the Roses Are Red final when she was shuffled out of it after securing a good early spot from the outside post. She stayed on last week through the stretch when it first looked like she may not be anywhere close; will be blasting and could be a surprise. PEAKY SNEAKY wasn’t bad in her elimination, pacing a couple of lengths off the winners cover; McCarthy may have to force the issue early. ROCKNIFICENT is always right there. KARMA SEELSETER upset from third over in her elimination in a race where it seemed like they were all hanging late.

There’s no one overly intimidating so let’s take a swing with WARRAWEE WHISPER. Trixton gelding has been connecting with Drury and has the speed to be well positioned again, didn’t disgrace himself in his Goodtimes races and will offer a price. LOCATELLI looked great in winning his Goodtimes elimination but then gapped off cover and didn’t fire in the final; I’m guessing he’ll go off as the favorite. PUBLICITY SEEKER is another that raced well in his Goodtimes elimination but then tired from the pocket in the final when he couldn’t keep with Fashion Frenzie and was passed late by a wide rally from longshot RITSON. Tough to disregard Dunn and Takter but I’m not sold on SPY BOOTH. ON A STREAK and MACHO MARTINI trying to win from 2-year-old memory.

A year after campaigning 3-year-old Party Girl Hill, the same owner, trainer and driver connections send out 2-year-old pacing sensation NIKI HILL. Unbeaten in four starts, Dunn had her geared down last week in an elimination that went nearly two full seconds quicker than the other, could be special. BOUDOIR HANOVER almost beat Niki Hill in that one’s first lifetime start at the Meadowlands and gave game chase last week; paced a big third quarter two back in the Champlain. JOYRIDE HANOVER was raging with pace once she was able to angle for clearance in last week’s elimination. That was an impressive Woodbine Mohawk debut and there could be more coming. PROHIBITION LEGAL gets the ultimate test to keep her unbeaten streak intact; had it her own way in last week’s elimination win. QUEEN OF SUCCESS flattened a bit late from the pocket last week in a race where BALANCE showed quick early foot but was no match for the top pair. JUST DIVINE had the unenviable task of pacing her final turn last out uncovered into Niki Hill; have a feeling that she’ll be better.

The Metro required no eliminations this year, and CAVIART CAMDEN is just two races removed from that world record 1:48.3 mile. That time itself is somewhat of an aberration since him nor anyone else from that race has come close to that time either before or after, but he’s obviously talented and I’m anxious to see how his Lexington form measures up here. PA sire stake champ TRUE BLUE LINDY won the Dream Maker here in August couldn’t have been more game in winning his sire stake finals at the Meadows last out; it looked for sure that he was going to be passed at multiple points by WEARINMYSIXSHOOTER after he cleared to the lead with a brush to the front going up the backside. WEARINMYSIXSHOOTER seeks redemption after breaking early here in the Nassagaweya. MARKET BASED popped pocket early in the Champlain but was repelled by the winner; gets a new driver in Andrew McCarthy as Dunn sticks with Taker’s colt. BOB LOBLAW looked like he was gapping in the Champlain even before the break.

This OSS Gold race pits the North America Cup winner against the odds-on favorite from that race, but there’s another contender lurking that could get them both. Starting with the Cup winner, DESPERATE MAN got his due on the big stage when he surged off cover to go past among others, Perfect Sting. He’s been out of position in a few of the races he’s lost but showed that when close enough he’s more than good enough; can’t be too far out of it now starting from post two in a field of seven. BULLDOG HANOVER through in a clunker in the North America Cup, simple as that. He was monstrous in his elimination but didn’t have the same punch last out in a race where he got off super easy on the front end. Which Bulldog shows up now? POWERTRAIN crushed in the 3-year-old open on the same night as the North America Cup, and won that race nearly two full seconds quicker. That was an extremely impressive race and I think he’s both fast and classy enough to beat the top two. BETTOR SUN was actively used last out in the Simcoe.