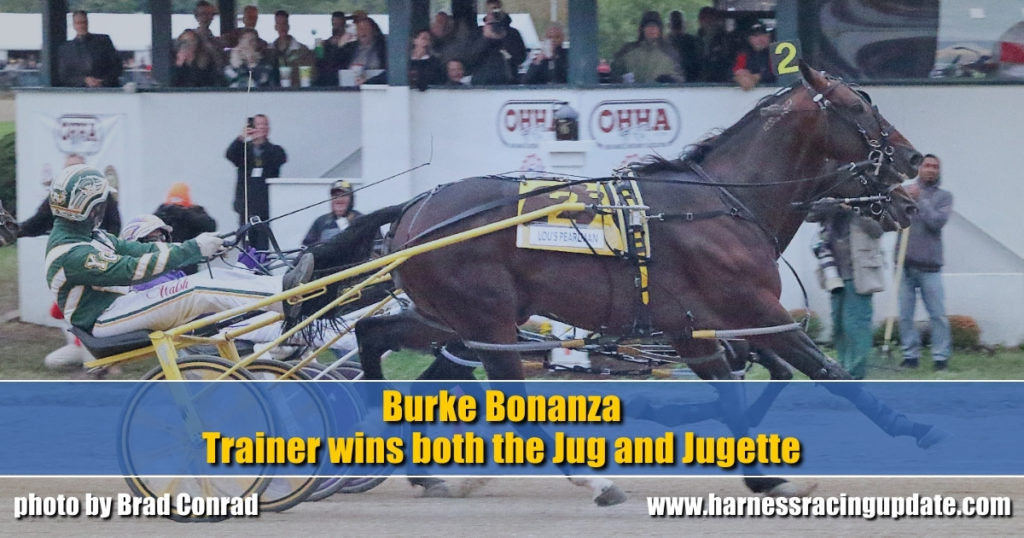 It has been quite a year for Ron Burke.

In addition to training nearly 700 winners to earnings in excess of $15 million, he was elected this month to the Harness Racing Hall of Fame. On Wednesday (Sept. 22) he won the Jugette with Scarlett Hanover.

On Thursday (Sept. 23) at the Delaware County Fair, his year got even better.

Brad Conrad | Ron Burke-conditioned Lou’s Pearlman (Yannick Gingras) grabbed the lead down the stretch and nipped favored Perfect Sting by a nose to win the 76th Little Brown Jug in 1:52.4.

Brad Conrad | The Jug victory capped a memorable week for the Burke Brigade. It was the first time since 1998 that a trainer has won both the Jug and the Jugette in the same year.

The Burke-conditioned Lou’s Pearlman grabbed the lead down the stretch and nipped favored Perfect Sting by a nose to win the 76th Little Brown Jug in 1:52.4 on a windy, 55-degree day.

The win was the third in seven years for the team of Burke and driver Yannick Gingras, who won the 2014 Jug with Limelight Beach and the 2017 edition with Filibuster Hanover. It marked the first time since 1998 that a trainer captured both the Jug and the Jugette in the same week.

“To win the Jug and the Jugette in the same year, it’s hard,” Burke said. “It’s hard to win one of these things and to win them both, it’s very special.”

“This is the first one we ever bred,” he said. “That makes it special.”

The Jug seemed to be a match race between Lou’s Pearlman and Perfect Sting from the moment the pair were installed as dual 2-1 morning line favorites.

Lou’s Pearlman got on the board first, capturing his division of the first heat by a widening 1-3/4 lengths in 1:54 for Gingras, despite being challenged much of the mile by Whichwaytothebeach, who ended up second.

“We love this race,” Burke Stable assistant trainer Mickey Burke said. “We are a very traditional barn. We like heat racing, and we prepare horses for this race.”

Perfect Sting showed he was also ready for the challenge, capturing his elimination heat by half a length over a fast-closing I’ll Drink To That, also in 1:54.

Perfect Sting had faded late in three of his most recent losses this year, but trainer Joe Holloway predicted that heats might be just what the pacer needed to “break him lose.”

The race appeared to be his to lose when Perfect Sting drew the rail and driver David Miller, seeking his record-breaking sixth Jug win, sent him straight for the lead with Lou’s Pearlman tucked in second.

Gingras pulled his horse going by the half and was quickly joined on the far outside by Whichwaytothebeach.

“I was surprised a little bit, but on the flip side, I could feel [Whichwaytothebeach] on my helmet,” Gingras said. “I was going slow because I was trying to control the pace from being first up.”

Down the stretch it was a dual of the two favorites, with Perfect Sting hanging tough—but not tough enough.

“I was thinking we were home free, even as they collard us in the last turn,” Miller said. “At the head of the lane, he sprinted away. He got a half a length on Yannick and kept pacing right to the wire. He just got caught.

“It’s tough to take. With his fractions and everything, I thought we were in good shape.”

The win was the fifth in a row and seventh of the year for Lou’s Pearlman, who was named for Lou Pearlman, founder of Backstreet Boys and *NSYNC, who died in 2016 serving prison time for a Ponzi scheme. He has now earned $510,032.

Timing has been key with Lou’s Pearlman, who struggled early in the year and failed to finish in the money in his first four starts.

“The first five weeks [of 2021], it was a disaster,” Ron said. “And then after that, we got him turned around, and it’s been nothing but great since then.

“[We made] little equipment changes… and boom, this is the horse we thought he was.”

Gingras credited the Burkes with preparing horses like few other trainers can.

“They have a great operation,” said Gingras, who is joining Ron in 2022 Hall of Fame class. “They have a lot of horses, but a lot of quality horses. He does a great job. Horses have ups and downs, but he is a master when they’re down to bring him back up. He knows how to find the problems and how to fix it. All the credit goes to him.”

For the Burke family, the win capped quite a week. Counting the Jug and the Jugette, the stable won 15 races — the most in the fair’s history. In addition, Burke’s parents, Mickey and Sylvia, were inducted into the Little Brown Jug Wall of Fame.

In the winner’s circle, as he pondered the magnitude of the moment, Ron Burke’s eyes welled with tears. He stared off into the distance, seeking composure and the words to express how far he and his operation had come. He also expressed appreciation for the team that built it, which includes his parents, siblings, assistants, caretakers and drivers like Gingras.

“It’s a whole family thing… Every year gets harder and we just keep plugging along. And if we keep getting the horses, we’re going to keep coming here.”