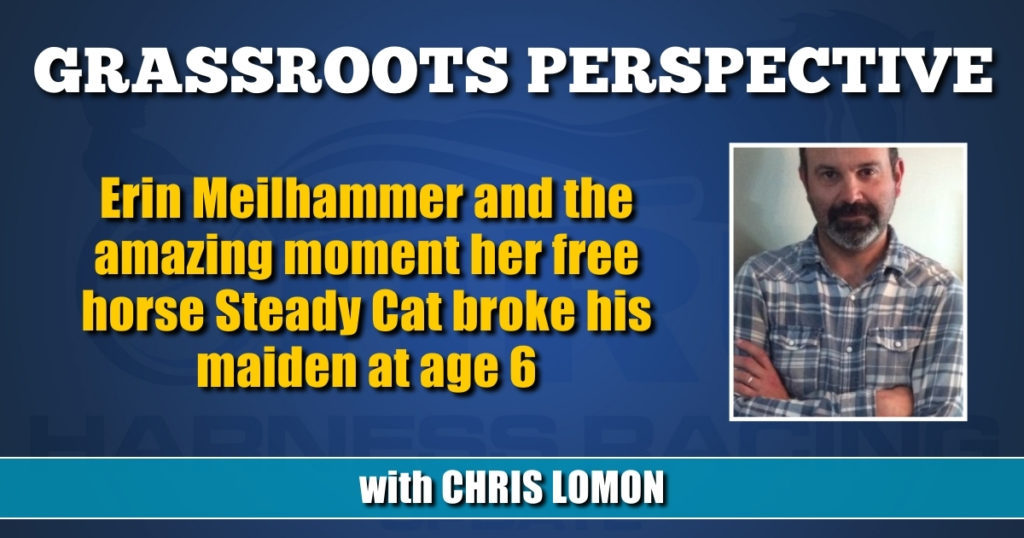 Erin Meilhammer’s horse racing field of dreams began in the most appropriate of places.

The horsewoman from Maryland, the one who grew up barrel racing and riding horses, will gladly tell you that there is truth to the adage that the best things in life are free.

A bay pacer by the name of Steady Cat would be a perfect example.

“Both my parents had racehorses growing up and then brother got into it as well,” said Meilhammer, who now calls Delaware home. “I helped him out for a while, but one day, I was curious, and bought a horse of my own… actually, I should say I didn’t buy the horse, I got him for free.”

It turned out to be a perfect match between Meilhammer and the gelded son of Quik Pulse Mindale.

“I got him as a 6-year-old. An older couple had him. He had bowed both front tendons as a 2-year-old at Harrington. The husband had fallen ill and his wife had him out in a field, where he was for four years. A friend called me and said she has a friend that has a standardbred she couldn’t take care of anymore and wondered if I would be interested in taking him. I went over and looked at him and it was instant love. He is the sweetest horse you could find. She gave him to me for free and we bonded right away.”

Meilhammer quickly went to work, making sure the horse was comfortable in his new surroundings.

Watching him renew his life on the racetrack wasn’t on the radar during their early time together, but that would soon change.

“Eventually, I started him back to see if there was a chance he could race again. There were no expectations on my part. The only thing that mattered was that he was happy. But he started showing signs that he might be able to race.”

After a pair of qualifiers in June of 2016, Steady Cat was in to race in Maryland over the half-mile oval at Ocean Downs.

There wouldn’t be a fairytale finish that evening, as the pacer broke stride and was distanced in what was his first race in nearly three years.

Less than 10 days after another qualifier, Steady Cat was in to compete at Ocean Downs again. He stayed flat over a sloppy track and finished seventh in a time of 2:01.2.

Meilhammer saw improvement, but had no idea what to expect from his next engagement on the evening of July 29, 2016.

She was hopeful of a better result, but unsure of what the final outcome would be.

To say that she was pleasantly surprised would be a massive understatement.

“He broke his maiden as a 6-year-old that night and he did it by 10 ½-lengths. It was such a cool moment. You just couldn’t ask for a better horse. I have tons of pictures of him. I’ll never forget that night. It was amazing seeing him open up and then win so easily.”

Meilhammer, who currently works in the barn of Steve LeBlanc in Delaware, is working on attaining her training license. Along with her fiancé, horseman James Stuart, they operate a small stable of their own.

The couple is looking to increase their profile and the number of horses they have in the near future.

“We work together, we race together and we live together… there’s a lot patience to be able to do that,” Meilhammer said with a laugh. “We’re working on building our own stable – we both work with Steve – and acquiring more horses.”

Right now, they have one horse, Murrow Boy, a 5-year-old pacing son of American Ideal.

Bred by Stake Your Claim Stable and Linwood Higgins, the brown gelding is another highlight for Meilhammer. So too is Allie’s Finale, a bay son of Allie’s Western.

“We bought Murrow Boy for $7,500. He wasn’t getting in every week. He wasn’t doing well for his owners and he is a bit of a difficult horse to have. He has bad feet and he’s not a great shipper… he’s just a really sensitive horse. You have to work around him and treat him with kid gloves. But that teaches you how to handle horses and understand what needs each horse has. He’s doing really well now.

“James and I owned a piece of the Allie’s Finale with Steve and two other owners. He was a Maryland Sires Stakes champion and was great for us too. There was a point where he was undefeated. He’s a horse that gives you everything he has every time he races.”

While she seems to have the magic touch with standardbreds, Meilhammer isn’t getting carried with any of the successes.

In fact, she’s happy to avoid the subject matter altogether.

As for her current list of goals, finding more horses like Steady Cat, Murrow’s Boy and Allie’s Finale, is a definite priority.

Meilhammer is excited as to what the future holds, even more so considering there were some question marks about her horse racing career not so long ago.

“The whole COVID thing, being shut down and not knowing when things would start to get back to somewhat normal, was a very difficult time. At one point, we didn’t know if we’d have to get out of the sport, or if racing was going to continue. I’m so close to the horses… it was very tough. There was a time when we thought we’d have to consider getting out.”

That decision, thankfully, is no longer weighing on Meilhammer’s mind.

She sees plenty of reason for optimism, both for herself and for the Delaware racing scene.

“Building our own stable and doing our own thing is something I’m truly excited about. I have the paperwork signed for my trainer’s license and I want to get that in the next couple of months, fingers crossed. We have good racing here and the people work very hard. Everyone is willing to work to see it succeed.”

“I’m in this to be around the horses and for the love of horses. Of course, I want them to do well. But I’m a big believer in giving horses second chances. They deserve that.”