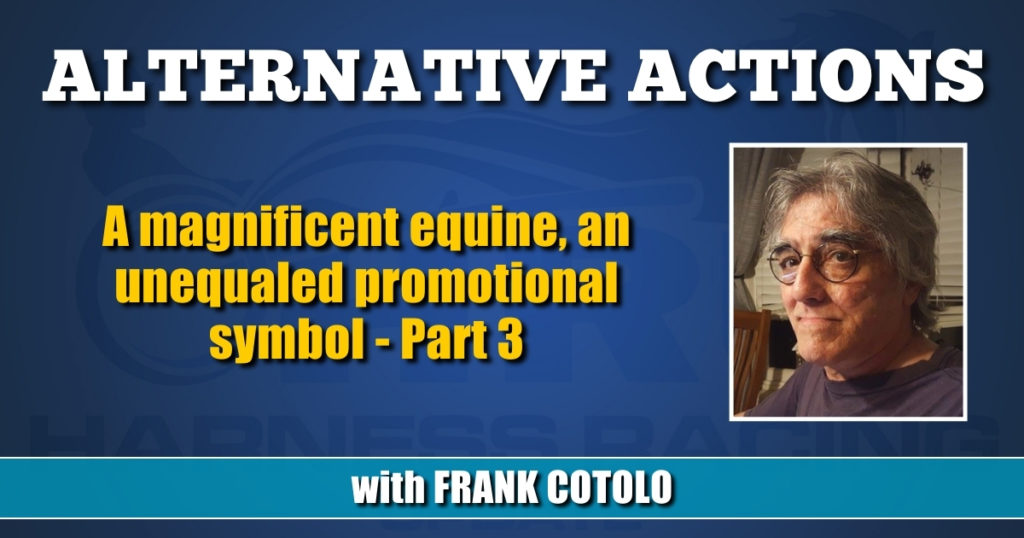 Alternative Action (AA) comes to the final part of our series that supports a promotional campaign for harness racing centered on the true star of the sport — the standardbred.

Parts 1 and 2 made the case for this fresh imaging that could give veterans of the sport an awakening to its essential element as well as present it to novices with an exciting and modern focus that competes with any virtual exercise in gaming.

As promised, the finale to the campaign’s alternative actions offers detailed suggestions for audio-visual elements in promo spots, expressing the strength and consistency of the standardbred foremost. Let us start with those equine qualities and explain how to hammer them into the consciousness of viewers.

In strong promotional material it is important to create a verbal repertoire; words and phrases which enforce images. “Strength” and “consistency” are two we will continually use in script copy.

There are many powerful action words that work describing the standardbred. But do not use any synonyms on a list; use those that are true to the horse’s nature. The voice-over scripts are simple, always accentuating the repertoire words:

NARRATOR: Standardbreds have tenacity in their blood. They are reliable, always pursuant of success. (PAUSE) Harness Racing.

In a video promo the actions have to demonstrate the words. There exists stunning footage of standardbreds in action. A director has an abundance of races to watch in video archives to match actions that define words, which then become harmony to the viewers’ eyes and ears.

Such promos are soundbites that are, tops, 20 seconds long. First there is a visual, shot in stark closeups of the animal. Then the narrator speaks the line. Then there are another few seconds of action, showing the full body of the horse in motion (trotter or pacer, do not distinguish). Then the narrator says: “Harness racing.” Fade to black.

Sets of such promos can be produced, each running the same brief time but using different angles, different short narration lines and archived races to elevate the standardbred image from “big horse that drags old men around in carts” into monster status — monster as in big and mighty and commandingly in control. It is all right and purposeful to make the standardbred look intimidating, if only to get the attention of Gen ZnS.

The short promos, in fact, are perfect for the current social-media platform Tik Tok, which recently passed YouTube in subscriber numbers. Opening an account that continually plays the promos, rotating a dozen or so, is free since it is not an advertisement. Do not ignore YouTube. An account is free there, too and you can label each promo for selection, preferably with the key words chosen for the narrator.

Another batch of promos should be produced to support the dazzling claims made in the first set. These promos should visually prove the standardbred is the tough, rugged beast we are presenting. Two racing situations win our case. The video-promo producer has to patiently audition events from the racing archives again, but this time searching for examples of “stamina” and “resilience.”

Stamina promos show a horse winning late in the stretch two consecutive times (or a split screen for the two races). Maybe there is a freeze frame as they win, then:

NARRATOR: Two races in one day; two wins in one day. That is standardbred stamina. (PAUSE) Harness racing.

Resilience promos display the standardbred’s amazing build as he or she rebounds from the kind of danger that can cause other racehorses to be put down. The producer must search for the spectacular collisions that can develop during a harness race. In this set of promos the narrator’s choice of words are essential. Each promo shows a race accident or mishap and how the horse is not injured.

The thoughts about standardbreds will linger in the minds of all the promo viewers and with the breed’s unfair image changing the stigmas will disappear and curiosity will lure the cats, the cool cats, the ones who used to be convinced the Sport of Kings owns the racetracks of the world.