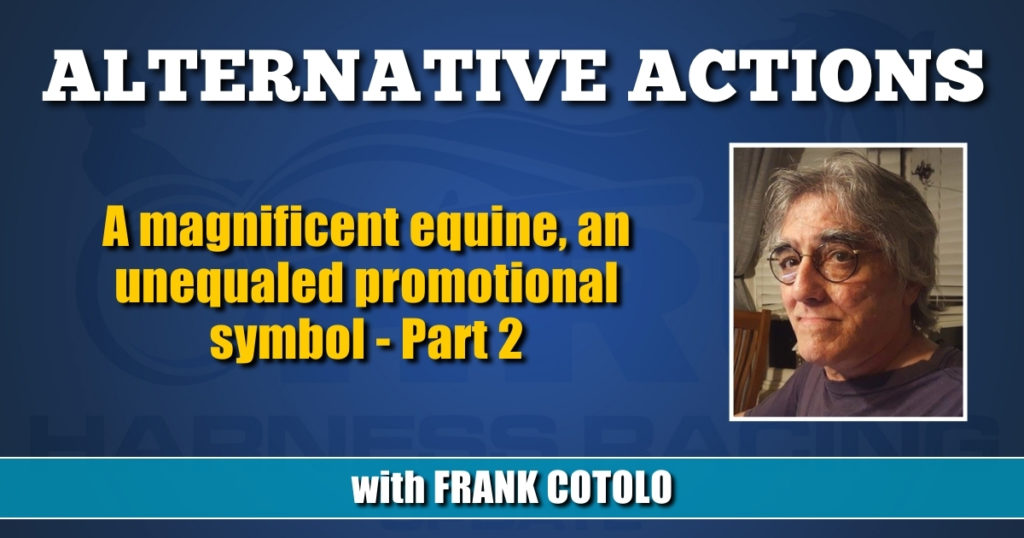 Alternative Actions (AA) is confident about one thing: harness racing’s best promotional image is the standardbred. In part two of our treatise, AA offers a fresh theme with specific media ideas to attract new fans and bettors to harness raceways — by concentrating on the outstanding qualities of a “harness horse.”

Educating prospective followers of the mighty standardbred should never approach the academic. It must come from the gut, where we all deserve to know the animal is as strong as it is graceful and resilient; a different breed endowed with talents no other horse inherits through blood.

Without directly comparing a standardbred to a thoroughbred, inferences of superiority can be conveyed merely by stating the facts about the standardbred, facts that are rarely, if ever, pronounced. The image will always lean on the truth; like the standardbred is bigger, more muscular and can manage rough conditions, speed and tactic without galloping. No thoroughbred could ever be taught those qualities.

And none of what is truly compelling about this breed will be kept from the public ever again. Nor will praise for the breed, be it boastful, because at the root of harness racing is a beast up to 16 hands tall and a thousand pounds that proves the engine is the source of it all, not the driver or the sulky or which way the wind blows.

“In harness racing, it’s the standardbreds that harness the power.”

That’s a great last line for a video promo, is it not? A good video director will be able to create short, explosive visions of standardbreds in full regalia pacing and trotting in a race, keeping the viewer’s eyes close to the animal where its muscles coordinate thrusting moves and that syncopate its speed. And as the viewer watches like a horsefly clinging for its life, there is nothing but sounds; the bass-drum-like pounding of the standardbred’s hoof beats and the horse’s heavy, consistent breathing — the engine guiding the driver (who’s never seen in frame).

It would be a priceless campaign to produce a dozen or so short, loud and colorful spots like the one I just described and place them on YouTube channels, the ones that have nothing to do with harness racing (you’ve seen the random YouTube commercials that are shown without prompting, the ones that promise your video will start in 10 seconds).

If the dozen or so different brief spots rotated from channel to channel repetition makes the point. Each would be shot from a different angle, each using a different horse; sometimes the view would be from the gait, a trotter’s or pacer’s stride hitting the track, sometimes on a dry surface and in other times hitting the sloppy surface or hitting the dirt as the rain pelts in harmony with the gait or even as the snow is falling, attempting to blind man and beast.

“Look and listen to the mighty moves of the perfect animal.”

There’s another great line to use in the final seconds of a spot.

These spots (as many as a budget will allow) would be the beginning of a campaign that shouts attention to the horse and these snippets will have viewers’ senses captured in the few moments they screen, always ending with a statement, always leaving the viewer with an unforgettable lasting image — and a strong statement.

So what? It’s an introduction that at the very least makes the viewer say, “What the hell was that?” and such curiosity builds with every spot one sees until it is time to expand the information about this horse and its unmitigated force that portrays something more than horse racing and certainly volumes about the breed too many people do not know.

And it is all true, told in promotional videos and with social media platforms and any other way they can be viewed. Once the standardbred is introduced (and re-introduced because the spots do not stop as the full campaign continues), it can be appreciated as the ultimate racing animal. So, during the first phases of such a campaign, nothing about betting or handicapping is mentioned. Yet, the virtues of the racing standardbred that are once and for all displayed as magnificent will be convincingly more than just harness horses.

“Oh,” says someone seeing some spots who heard of harness racing but was not aware of anything about horse involved, “I thought that was a thing for old people.”

“Hey, I went to the harness races a few times,” says someone who knew harness racing exists but is unaware of the particular specialties of the animal, “but I thought it was the guys in the carts did all the work.”