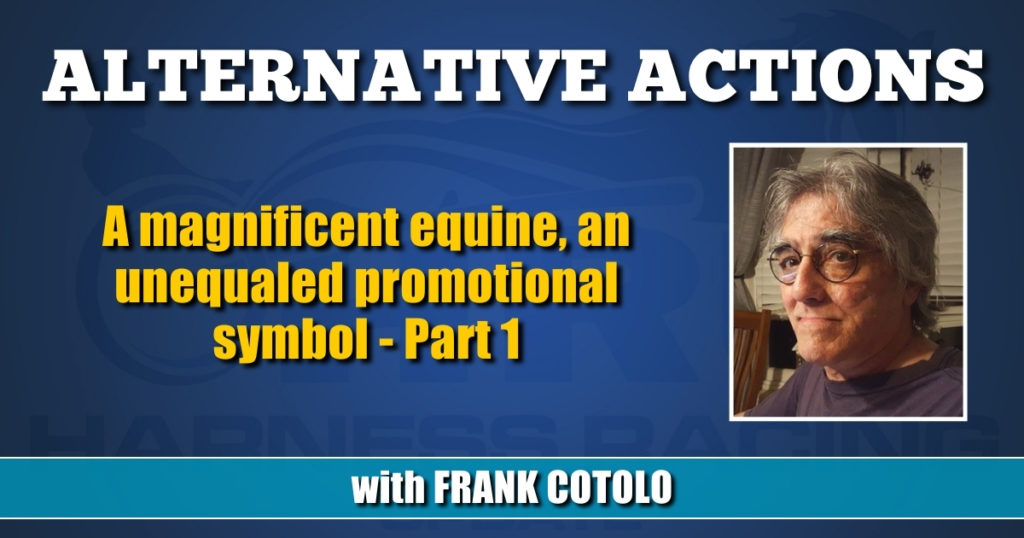 Every standardbred from Hambletonian on is, in itself, a thousand or so pounds of pure promotional material. Yet, the business of harness racing has never focused upon the standardbred alone as a promotional tool.

Alternative Actions (AA) thrives on painting a broad picture of new ideas to increase pari-mutuel business. What we suggest to standardbred raceways everywhere this month is a sparkling new idea that uses the oldest of elements involved in harness racing first and foremost.

The standardbred is the star of harness racing. More than any other person or accessory connected to its role in the greater picture, the standardbred should get top billing. Though it takes the care and skill and knowledge of many people to adorn the standardbred with the gear and behavior and regimen needed to race, as sure as Hambletonian secured the legacy of trotting horses, the standardbred breed is literally the lifeblood of the business.

To the generic public — and unfortunately too much of harness racing’s wagering community — a standardbred is just another kind of horse (the public rarely calls it a breed) that is bigger than a Quarter Horse, slower than a thoroughbred and the descriptions go lame from there, so to speak. Let me give you a current example that is sad, at best.

In Florida, where Pompano Park Harness is teetering on the brink of official closure, a news article in the Florida Sun Sentinel reported on its demise. The most interesting thing about the article is not the news itself, it is the journalist’s obvious unfamiliarity with the sport.

The journalist’s definition of harness racing itself may be unintentionally simple but that is no excuse for its blatant misrepresentation to the uninformed reader as well as its description is an insult to the population of standardbred industry workers in the state — and around the world. Here it is from the article’s last line:

“Harness racing resembles a scene from the iconic film ‘Ben-Hur,’ where racers ride in two-wheel carts pulled by horses.”

Aside from the fact that the writer assumes its readers are acquainted with either the 1880 Lew Wallace novel, the 1922 silent-film, the 1959 blockbuster movie or even the 2010 TV mini-series that lasted only two episodes, the writer does not have a clue of what kind of “horses” are pulling the “carts.”

It is time everyone in the public who knows or does not know about harness racing learns how mighty is the standardbred. The standardbred itself can be a powerful promotional figure to draw a larger audience and greater wagering base for a new generation to in be more than simply aware of the equines but to be enthralled by them.

With today’s inexpensive yet superb high-tech movie gear, it is easy to produce short, exciting video promos. Raceways should find a youngster with the prowess to shoot and edit video promos (there are only a zillion boys and girls on the planet who have these abilities) that are only about the standardbred’s unique traits.

Unfortunately, in the past, productions including standardbreds focused on their speed. For breeders and owners and the miniscule members of a nerd fan base, speed is important. However, there is nothing either exciting or sexy about speed in harness racing in the era of the fast and the furious. Standardbreds should have a new focus in promotional material, ignoring the fast and accentuating the furious.

Building the image of the new standardbred must be a profile of power. It must declare the standardbred’s mightiness, energy, clout (its special advantage among equines), strength, tenacity and resilience.

Without putting down the thorougbred, it is important to make a comparison of the two breeds of racehorses just to clear the air of all misconceptions concerning the physical differences of the two. Once you eliminate the matter of speed, think about what you are left to compare: Thoroughbreds are small, delicate, tender, subtle animals (using the term “animals” instead of “horses” is a potent choice) while standardbreds are large, tough, robust, rugged, endurable, abiding, and so on.

Aggressive messages must drive the standardbred’s “indestructible,” bigger-than-life image into the minds of a prospective audience of fans and bettors. It’s an animal that races dangerous miles among treacherous others in its breed.

In Part 2 we will give specific ideas concerning copy and actual clips of races that turn heads, on shooting exciting visuals about a standardbred’s new image with courageous, modern examples of getting anyone’s attention.