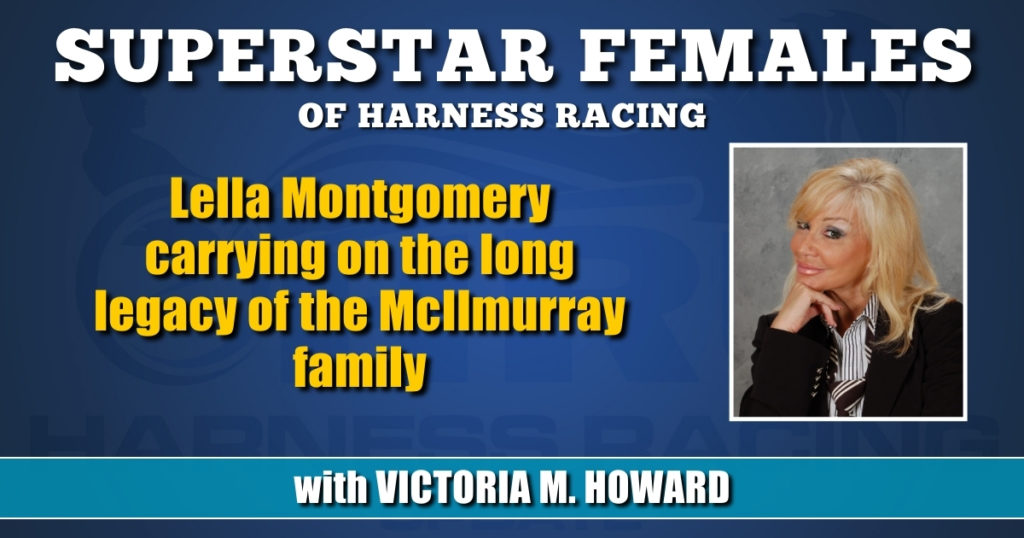 Lella Montgomery carrying on the long legacy of the McIlmurray family

Anyone involved in harness racing most likely has heard the name McIlmurray, for it proudly represents decades of successful horsepeople.

Her uncle Elwood was a starter; uncle Don, a trainer and driver who was killed in a training accident on the track at Hazel Park; and uncles Jerry, Bobby and Kit all trained. Montgomery’s cousin, Warren McIlmurray, trained and drove. James was a practicing veterinarian, and several other cousins were involved in various aspects, such as Judy McIlmurray, who was a teller at several tracks. It was definitely a family affair.

Montgomery’s father is Wally McIlmurray Sr. – a trainer, driver and owner who also served our country while in the Army.

It was a momentous day for Wally Sr. while attending a fair in Plymouth, MI. That day he was introduced to his future wife, Patricia Johnson, by her aunt and uncle who owned a horse they raced at the fairs.

Although Patricia didn’t own a racehorse at the time, she had a riding horse, and loved the sport.

That union would be the beginning of decades of great horses setting records and years of hard work in the sport by the McIlmurray family.

After they married, Wally and Patricia worked together racing horses in Michigan and Windsor, but stabled in California in 1956 – racing there for several years. They also raced in Kentucky, New York, and Ohio in stake races.

They had four children: Art, Wally Jr., Adam and Lella.

Lella also has a half-sister Mandy, who for years groomed for her dad. Mandy’s brother, Dr. John McIlmurray, is a practicing veterinarian.

“Every one of us was involved in some way in harness racing,” Montgomery said. “My brother Adam had been a starter for over 50 years; and is currently starting at Saratoga and Vernon, but spends most of his time as the starter of Pompano Park.

“My brother Wally Jr. was a well-known trainer and driver, who succumbed to cancer in November, 2020. Being the determined man he was, he raced horses up until that September, but had to stop in October when the pain was too much for him to bear.

“Wally raced mainly in Michigan, but also in Ohio, California and Florida. Several of his horses were SKIP WITH JOY, ALL ABOUT SAM, MJ And HAY SONG.

“My brother Art still trains and drives mainly in Michigan, but also in Ohio. He does a lot of catch driving, besides driving the ones he trains, such as CRYSTAL RAI, TRAVELING SWAN and BOUND TO SCORE. In the past, Art trained and raced in New York, New Jersey, Florida and California. He’s doing very well, and earned the leading trainer and driver award this year at Northville.

“Some of his favorite horses were NIGHT COURT DAN, ART’S FANNY and HOT SELECTION.

“Dad was the trainer/driver of HAPPY SHARON, the New York sire Champion at 2 and 3, as well as Michigan champion.

“My father had many great horses besides HAPPY SHARON, such as THE BIG BEAR (by Gene Abbe) who was a free-legged invitational pacer, and YELLOWBIRD, who was Bear’s full brother and also a good horse.

“Then there was MIGHTY PHANTOM, who was a 2 and 3-year-old Michigan champion; FROZEN ASSETS, a New York Stake trotting filly, and also top racehorse, CHAIN LIGHTNING.

“When dad was in his late 70’s there were two horses he loved — WESTWARD VISION and SUNSHINE DUDE — both open and invitational pacers at Hazel Park.

“Up until my dad passed away of cancer in 2005 he never stopped going to the barn — watching his horses while hooked to his oxygen tank.

“Like his son, Wally Jr., he never gave up, saying, ‘Never quit working. Keep doing what you love!’

“My mother passed away in 2009 and is deeply missed for she was our biggest supporter and the backbone of the family.”

So. it’s no wonder their daughter, Montgomery, would make her mark in the sport. Being their only daughter didn’t stop the young woman.

Born in Detroit, but raised in Livonia, Montgomery began working with her father and brothers in the barn as a young girl.

“As soon as I could pick up a pitch fork, I started working in the barn. I absolutely loved horses and knew immediately I wanted to do this the rest of my life.

“I helped dad on weekends and once school was out for the summer, I worked as a groom. I used to love watching the outrider at the track and when I graduated from school in 1972, I went to work for dad full-time at the barn.

“The next year I was offered the outriders job, by Dick Wilson, the general manager of Wolverine Raceway. I was ecstatic!

“I borrowed a friend of my dad’s horse — a beautiful Morgan named Wal Thor (aka/ Wally). At the time Wally was in retirement, hanging out in the field. We pulled him out, cleaned him up and he worked out great at his new job.

“I bought another horse, Blue, the next year, and another named Buck. Both were good at their job.

“I loved my job and my horses made it easy for me. The next year I went to Hazel Park to work and a few years later, Joe DeFrank, who was race secretary there, asked me to come there to outride.

“Several years later, The Meadowlands opened and Joe went there to be race secretary. I applied for the outrider job, but it had been filled, so in 1982 I worked for Joe in the race office.

Montgomery has also driven in a race.

“My first drive was at the Meadowlands in 1992 with a horse called SEA BATTLE in 2:00.4. He was a big, beautiful trotter trained by Linda Toscano.

“Peter Gerry asked me if I wanted to drive in the Billings. I was so excited because I always wanted to participate in the race, but never had the chance. It turned out to be the most exciting thing I had ever done.

“I set a world record for ‘Fastest Trotting Mile for a Women Driver Amateur or Professional’ in 1995 with CHRISMA SEELSTER in 1:55.3 — a new lifetime mark.

“My best friend, Jacquie Ingrassia, and her husband, Frank, trained a lot of horses I drove on the circuit, such as U TOE THE MARK, EFFECT UNKNOWN, and MATT’S MEMORY. It was so special, for they are my closest friends and we had so much fun together—and that’s what it’s all about, isn’t it?”

Today, Montgomery enjoys her life with her husband, Bryan, who she met at a sale in Lexington 34 years ago.

“Bryan has been in the insurance business for 40 years and owns Regency Livestock LLC, where he insures all types of livestock; but mostly horses and farms.

“Bryan and I work together and we love the same things: food, wine, racing, golf, hockey and sports.

When not working with Bryan, Lella loves to ride and show her horse, Blake, (aka/DOUBLE THE DRAGON).

“He’s always a challenge, but he’s a good boy, He’s come a long way and does everything I ask of him. Blake was a standardbred I got when he was 4. He is now 11.

“I loved each and every one of my horses, but if I had to pick that special horse, I’d have to say it was BILLY BULLETPROOF. (But don’t tell Blake, lol.)

“We bought Billy as a yearling and raced him at 2 and 3 before he became my riding/show horse, and remained so for 24 wonderful, fun years until I had to put him down at the age of 29.

“I have always loved standardbreds and knew they were a special breed. Paula Campbell, Judy Bokman and I originally started the Standardbred Retirement Fund raising money by having a bake sale.

“SRF is still going strong and doing a wonderful job in helping the breed. I will always support and help anyone I can to find a home for a horse and hope owners and trainers do their best they can to find the horses’ good homes after racing.

“I love our sport, although it has changed so much from my days growing up, but the one thing I know is that the horse is the same fabulous breed it always was. It makes me happy to see life after racing for these wonderful animals.

“Standardbreds can do it all and I hope we can keep the standardbred business, known as ‘The family business’ going on, and as dad said, ‘People will continue to do what they love doing.’”