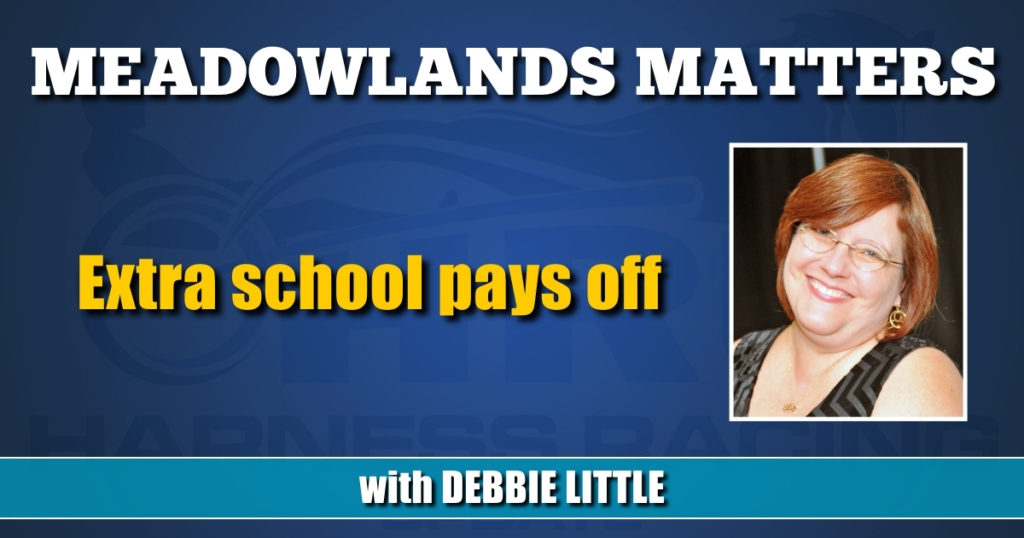 The addition of a leg of the Kindergarten Series for 2-year-olds helped The Meadowlands fill this week’s cards.

“This week was way better than last week,” said Big M race secretary Scott Warren. “[Adding a leg of the Kindergarten] was discussed after we moved the Reynolds last week and I told them all that if we get the same numbers as the Reynolds, it served its purpose. And we actually got more numbers than the Reynolds. We ended up with seven divisions.”

The Meadowlands is usually dark for about nine weeks following Hambletonian Day, but for the second straight year, they’re racing in September due to COVID-19.

After a three-month shutdown early in 2020, they came back in September and raced just one day the first week, which was Kentucky Derby Day, before returning to their usual two nights a week for the remainder of the month.

This year, to make up for the Thursdays that they’d normally race in December, they brought back September racing on Friday, Sept. 3, but only 158 horses dropped in the box.

“I think it caught us all off guard,” said Meadowlands chief operating officer and general manager Jason Settlemoir. “I thought we’d be a little short coming back in September with horses scattered all over the place, but I didn’t foresee that coming, that is for certain.”

“It was planned that we were going to have two races,” said Dave Yarock, president of the GSY. “And then [Scott] said ‘We’re really short’ and I went to work and I was able to get a total of three races.”

With amateur races also taking place at Pocono Downs, at this time it’s not always easy for Yarock to get horses even though the GSY has a unique feature. They give four per cent of the purse to the horses that finish sixth through 10th, meaning everyone that enters is guaranteed a minimum $600 payout.

Rather than canceling a night, as Harrah’s Philadelphia had to do due to a lack of entries for its special Labor Day card, The Meadowlands had an ace in the hole. The conditions of the Reynolds Stakes, scheduled for that Friday at Tioga Downs, allowed for the change of date and venue.

“We actually own that stake and The Meadowlands puts it on for us,” said John Campbell, president and chief executive officer of the Hambletonian Society. “They did reach out and consult with us that they were making the change, so I was aware of that. It’s an unfortunate situation. People want to know where the race is. The conditions clearly say they can change the venue or the date and The Meadowlands chose to exercise that right. It’s not unprecedented. The Cane was moved from Tioga to Pocono [in 2011 due to flooding] after the draw was made.”

The boxes at Tioga and The Meadowlands closed at 9 a.m., and by 10 a.m., the move was announced. Everyone who dropped in was contacted and according to Nick Salvi, stakes administrator for both Tioga Downs and The Meadowlands, most were happy about the change.

“After we made it known, I received a few texts from trainers who were not pleased saying they would have entered horses had they known the race would be at The Meadowlands,” said Salvi. “By then, it was too late to do anything about that. No entries were taken after 9 a.m. and no one took out of the box after 9 a.m. There was eventually one scratch from the five races.

“The Reynolds situation was not perfect, we all would have preferred to leave it as scheduled, but under the circumstances we did what needed to be done. Adjusting has become a part of all businesses over the past 18 months.”

Some horsemen chose to express their opinions on social media but none of them contacted Settlemoir directly.

“We try to consider our customers, owners, trainers, drivers, grooms and employees to make sure it’s all right for everyone,” said Settlemoir. “We’re trying to accommodate everybody.”

The Meadowlands has gone out of its way this year by adding legs to series like the Kindergarten and Miss Versatility, picked up some legs originally scheduled for Canada and even added a short series for pacing mares to help horses get raced.

Some may be unhappy with the circumstances surrounding the Reynolds, but looking at the track’s past performances for the entire year, far more are thrilled with the overall results of the East Rutherford mile oval.