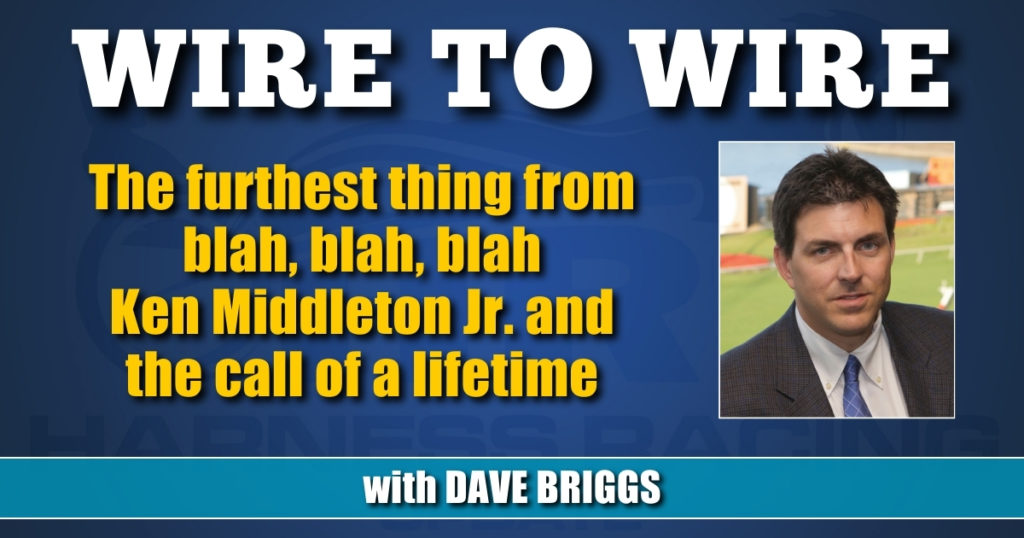 Call of a lifetime

In the furthest thing from blah, blah, blah, Woodbine Mohawk Park announcer Ken Middleton, Jr. called his own homebred trainee Bob Loblaw to victory in the Nassagaweya in honor of his late friend and the pacer’s partner Bill Galvin.

If you listen closely to the replay (watch here), save for a few extra deep breaths, Woodbine Mohawk Park’s veteran track announcer Ken Middleton, Jr. — ever the pro — did a remarkable job of keeping his emotions in check and just getting through the race. It wasn’t until his homebred trainee Bob Loblaw was standing in the winner’s circle after officially becoming a Grand Circuit winner that Middleton’s voice cracked.

“Nice representation in the winner’s circle here tonight. One guy that’s not here — and I dearly wish he was — is my late partner Bill Galvin,” Middleton said, his voice shaking. “This is a homebred that Bill and I would have owned together. We took on some new partners this year and what a thrill it’s been. Bill’s here in spirit, though. We all know that.”

Galvin, the Canadian Horse Racing Hall of Fame inductee with the indomitable spirit and boundless energy, died in September of 2020 at the age of 89. Galvin bred Bob Loblaw with Middleton. The gelding is now owned by Middleton, Dave Walls, Jim Grant and Starting Centre Stables.

A few days after Bob Loblaw (Sunshine Beach—Lady Marina) nosed out Battle of Waterloo champion Betterhavemymoney in the $140,300 Nassagaweya on Aug. 28 at Mohawk, Middleton said announcing that he was the trainer, co-breeder and co-owner of the 2-year-old gelded pacer was the easy part.

“It’s getting through the race without having a nervous breakdown or having a heart attack that was really hard,” he said.

“He had been a little bit sick during the week. You don’t know how healthy they are until you actually race them, so I was a little concerned,” Middleton said. “Just before the race, my heart started beating like it’s never beaten before. It was literally beating out of my chest before the race even started, like, just when they called them to the gate. I told myself that I had to take a couple of deep breaths here. I was very worried that maybe he wasn’t at his best health-wise, but it turned out that he raced well (finishing third) and he came out of it well and he was healthy enough, but it was just me being super cautious.

“It’s not even the money or the stature of the race… if it was a $7,000 claimer, and I called it, I would probably feel the same type of build-up in my body. I’m concerned about the well-being of the horse while it’s in the race.”

After the Nassagaweya victory, Bob Loblaw’s driver, Sylvain Filion, was quick to praise the job Middleton has done training the young horse.

“At first, he was kind of a spooky 2-year-old that had to learn how to race, but I have to give credit to our man up there,” Filion said, tilting his head toward the Mohawk announcer’s booth. “He did a great job with him and he’s come a long way.”

Asked by Chad Rozema what emotions Middleton might be experiencing in the aftermath of victory, Filion smiled.

“I’m pretty sure he’s pretty emotional right now. When you raise them and it’s a homebred, it’s always extra special,” the driver said.

At the same moment, Middleton’s phone was blowing up with congratulations.

“I spent the rest of that night and half of the next day just responding to congratulatory messages,” Middleton said in awe. “That made me feel really good and that’s the great thing about racing is how far it reaches. It’s that ripple effect. It’s not just people that I know in the industry, it could be people that I went to high school with or just racing fans I’ve never even met.”

How Middleton came to this moment is part of a life-long journey in harness racing highlighted by over 35 years of calling races — first at dearly-departed Elmira Raceway beginning in 1986 followed by stops at Orangeville Raceway and Flamboro Downs and other tracks in a fill-in capacity before succeeding Frank Salive at the Woodbine Entertainment Group in 2006.

“I was always first and foremost a fan of racing. I loved betting on races when I was younger. I’ve gotten away from that now, but I like new challenges. I hung around the backstretch because I was cutting grass or cleaning up the ship-in barns for my dad, but I was always curious about the horses themselves. So, I wandered into the barn and I got involved on a small scale there with some cheap horses,” Middleton said.

Later, wanting a new challenge, Middleton decided to buy a yearling or two, which evolved to breeding a few of his own.

Middleton said he had a lot of help. Tammy and Rob McNiven of Twinbrook Farms and Darlene and Derek Hayes of Hillsborough Farms, were key advisers on the breeding front. Conditioners Casie Coleman-Herlihy and Blake MacIntosh were instrumental in giving Middleton training advice.

“When I started getting yearlings it was a whole different challenge. I was starting out with a product that was just raw. It wasn’t a claimer that had raced 200 times,” Middleton said. “I had people that I could lean on and ask questions. I was fortunate in that sense. The rest was just taking your time, be patient and keep them healthy and sound. It’s the same principle that applies to every day with every single horse, but babies especially.

“I had a lot of help this winter with (Bob Loblaw) and my other colt from a good friend of mine, Rob MacKenzie… He’s a veteran trainer and he’s another guy that I picked his brain quite often. He’s had great success in the industry and he never said ‘no’ when I asked him for help. He’s a guy that I leaned on quite a bit to get this colt here and of all the people who have helped me along the way, he stands out.”

The Nassagaweya victory was the second lifetime win for Bob Loblaw, who broke his maiden winning a $18,509 Ontario Sires Stakes (OSS) Grassroots event on July 9 at Mohawk. The gelding sports a record of 2-0-3 in eight career starts, earnings of $85,755 and a mark of 1:52.4. In his follow-up race after the Nassagaweya, Bob Loblaw was sixth in an OSS Gold event at Mohawk.

Middleton said due to stakes races being bunched in September thanks to schedule adjustments brought on by COVID-19 lockdowns earlier in the season, Bob Loblaw has a particularly busy month. The pacer might test the Champlain this weekend and then, possibly, the eliminations for the Metro Pace.

“After that, I’ll be able to cut him loose and give him time off,” Middleton said. “I’m just hopeful that he can handle the rigours of that schedule for the next four or five weeks. I’m trying to be easy on him. He doesn’t need a lot of tough training now because he’s racing every single week for the next little bit. I’m fortunate to live two minutes down the road from the training centre that I’m at, so I can turn them out in the morning and then after they are done their lunch I can turn them out all afternoon and just let them be a horse, because I think that’s important, too.”

Through it all, Middleton said he would dearly love it if Galvin could have been here to see Bob Loblaw’s success.

“Bill would just be over the moon,” Middleton said. “He would come out religiously to my farm just to check in on him. He would take pictures. He was proud as a peacock about it and he told everybody about it. It was just like it was one of his children. He gave daily reports to his friends about his horse, which made me really proud because he was so supportive and he was such a good friend. He was so respected in the industry, but he was also respected just as a human being. I don’t know if I’ve ever met a person as kind and as sincere and genuinely ambitious as Bill for his age. It was non-stop and it was contagious and would kind of spill over into you. It breathes life into you because here’s a guy that’s at an advanced age, but he just never stopped. I don’t know, he kind of energized everybody around him because of that.”

Middleton did learn a lot from the master publicist before Galvin died. So much so that he’s trying to convince legendary thoroughbred race announcers Dan Loiselle and Tom Durkin to take a share of a horse with him, partly for the fun and partly to help promote the sport.

“It would just be a great story for the media to use,” Middleton said. “I’d even say to them, ‘Go ahead and pick a funny name, you guys pick the name.’”

It was Middleton, after all, that named Bob Loblaw not after the Scott Baio character on Arrested Development, but more as a race caller’s joke.

“As an announcer I appreciate funny names that give you a chuckle and as a name he kind of hit a home run. It’s a commonly-used term and a friend of mine, Jimmy McClure, used to say it all the time ‘blah, blah, blah..’ and I thought, ‘That’s funny, I’m going to name a horse that someday.’”

Little did Ken Middleton, Jr. know that one day he would call that horse’s name to victory in a Grand Circuit race at Canada’s biggest racetrack.