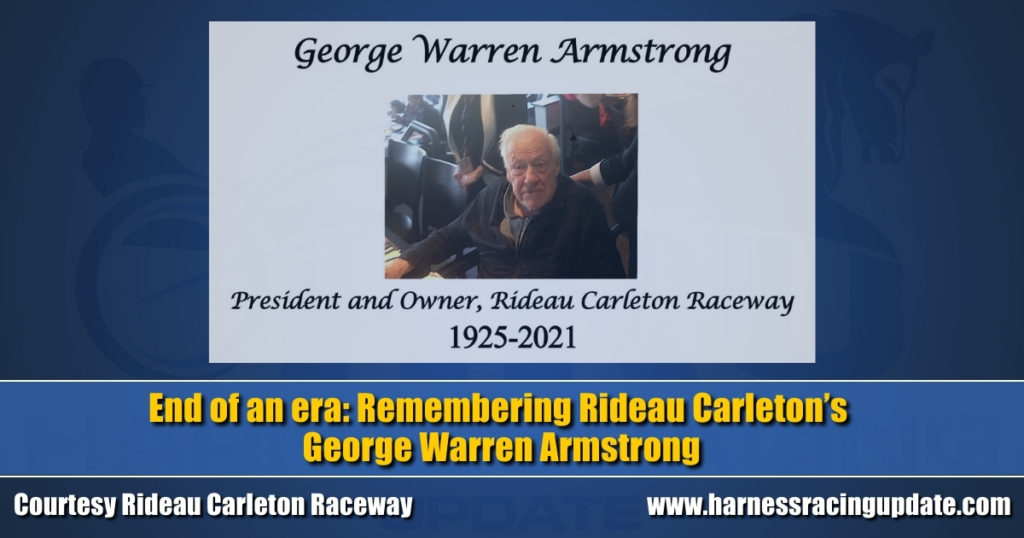 When Rideau Carleton Raceway announcer John MacMillan informed the track’s audience that George Warren Armstrong had died last Sunday (Aug. 23), there was emotion in his voice. With partners James Baskin and Robert Fasken, Armstrong had founded and built the Ottawa, ON landmark, which first opened in 1962. In the ensuing 59 years, he had become more mentor/friend than racetrack owner/president to those who worked for him.

Peter Andrusek is racing manager and financial controller of Rideau Carleton Raceway’s remaining holdings. Richard Gardner is secretary-treasurer and director on the Raceway board. Gardner said he joined the company in late 1994-95.

“…but his passion,” added Gardner.

Only after retirement was Armstrong finally free to make his racetrack the center of his world.

“I would say that was around 1998-2000,” said Andrusek, “and then he moved down here in Ottawa. He basically retired from his other interests and kind of took over a more full-time custody of the operations here.”

Gardner said that while Armstrong stood around six feet tall, it was his outsized handshake that left a lasting impression when they initially met.

“The first thing that captured me was the passion he had in the business. He was full of ideas. He would always spend time with everybody. He wasn’t kind of a top-down guy; he would make himself available to everybody,” Gardner said.

Andrusek and Gardner were new to the company back then, but they knew Armstrong well long before they moved into senior management. Andrusek explained that the racetrack founder was a “fatherly kind of person” to those in his employ.

“He wasn’t just interested in the business; he was interested in you. Remember back then, we were just 20-year-old kids, and it was nothing for him to come into your office, sit down, and spend 30 minutes talking about you,” Andrusek said.

Gardner said that Armstrong had an approach to building the Rideau Carleton team that was ahead of its time.

“When I first came on board, I actually moved from Mississauga… He didn’t believe in just going out and hiring people. He talked to people and asked them to recommend people, because he wanted to make sure that people had a good fit. So he wouldn’t put a posting out… He wanted that ‘family’ relationship.” Gardner’s brother-in-law was a controller at Woodbine who recommended the recent university graduate.

Armstrong also loved history, added Gardner. “History of Canada, and particularly history of the English factor, English being England, the British background. What he would do is, he would put a picture on the wall in the boardroom of a 200-, 250-year-old person. He’d put a $5 bill on it.” The first person who could identify the picture got the $5. “It was his way of getting everyone to learn about history because he said, ‘You know, too many people forget history and they just trudge forward. They don’t learn from past mistakes.” (The Rideau board director proudly remembers winning $5 for correctly identifying Manitoba Métis leader Louis Riel.)

“Warren never, ever craved the spotlight. That’s why you don’t see a lot of pictures or videos of him,” said Andrusek. “He would always step back in that regard: Even to get him out to the Del Smith [Classic, for top aged pacers], for the winner’s circle, you couldn’t get him out there.” Armstrong preferred the camaraderie behind the scenes, and contributed in a personal way. Andrusek noted over 120 comments quickly accumulated when Armstrong’s death was announced on Facebook. “I’m not talking managers and stuff. I’m talking servers, bartenders, security guards,” he told HRU. Armstrong had quietly helped many through personal crises, and shared a beer after the races with many more.

Employees tended to stay with the track long-term, an anomaly in today’s racino environment.

“When Hard Rock came here, one of their biggest shocks when they went through our roster of personnel was how many people were here on Rideau’s [racing] side 20, 25, 30 years,” said Andrusek, naming the casino company that teamed up with the track in 2017. “That was something they had never seen before. That was a testament to Warren Armstrong.”

Gardner added that an employee in the accounts payable department had been there 38 years, while one of Rideau’s dining room chefs had worked there 41 years.

Why did Armstrong found the track? Rideau’s manager of racing said it started with one priority: “Opportunity. Make no mistake, Warren was a businessman. If opportunity was there, he would chase it, and that’s what he sniffed out in 1960. Harness racing was big at the time. The only track going at the time was Connaught Park, there in Aylmer [Quebec], and he saw real opportunity.” Later, the businessman fell in love with the racing side, a passion that grew for the rest of his life.

“One thing about Warren was he was a tremendous innovator. He always wanted to innovate but at the same time, he was also a businessman,” said Andrusek. Establishing the Rideau Teletheatre Network in the early ‘90s was part of that. “In the end, it extended all the way past Belleville. He took that football and ran with it, before other tracks would even wake up. We had a teletheatre in Kingston and there was a track in Kingston! They were like, ‘How did this happen? There’s a teletheatre right out beside the track!’ That was Warren Armstrong. He kept pushing the envelope, but he really believed two things: He believed at that time, [teletheatres] were the future, and secondly he really wanted to bring the product to every corner of Ontario.”

Sometimes it was at a break-even level. “Just put our flag there, like on the moon,” quipped Gardner.

“It was Warren that reached out to the horsepeople and said, ‘What are we fighting for, people? There’s plenty of money here to satisfy everybody. Stop this! I’m making compromises; you make some compromises.’ Eventually, this was the foundation to the creation of the NCRHHA.” The National Capital Region Harness Horse Association became what the racing manager called “the blueprint for COSA,” the Central Ontario Standardbred Association.

There was no coldness to Armstrong’s business savvy. He frequently welcomed communities to the track for a special night out at the races, building loyalty and repeat customers.

When the Gloucester Fair lost its location, Armstrong allowed the fair to use the Rideau Carleton grounds, rent-free. Gardner recalled that a day for underprivileged special needs children was rained out, and the fair couldn’t afford to reschedule. The track owner covered the bill to ensure the event went on. “The following year, they also had a bad year and Warren said, ‘Cut them a cheque.’ He said you cannot let institutions die, because it’s only going to be a short run of this.”

When the Rideau Carleton purse account ran dry, after the Slots at Racetracks Program was cancelled in 2012, it was Armstrong who stepped in again. Andrusek remembers breaking the unfortunate news: “We were able to continue to operate on the surplus, but […] we were going to have to cut the Thursdays. We’ve got to go one day a week. There’s just no more money.” The track owner asked him what it would cost, from his own pocket, to keep racing two days a week. “It was $400,000. I just figured, that’s it. $400,000 is a lot of money. The man came back an hour later and said, ‘Don’t cancel the dates.”’ While race dates were later lost in the TPA (Transfer Payment Agreements), Armstrong’s personal funding had helped with the transition. “I think we were doing 120 and we went down to 90, but he wanted to bridge that and provide that cushion [for horsepeople].”

Armstrong kept his family out of the spotlight. Daughter Victoria Wright “is the only one that came into the spotlight because she’s the eldest,” said Gardner. “She’s the one that has taken over his business; the rest of them have not.”

Although he made his career in the business world, Armstrong was drawn to agriculture.

“In his mid-80s, you wouldn’t be surprised to see him out with the [racetrack] gardeners, planting the plants. Warren’s business card that he gave people had a picture of a small, young boy in a sandbox, and his title read ‘assistant groundskeeper,'” said Andrusek, laughing. Gardner noted that the interest didn’t end at Rideau Carleton, either: “From what I heard, in his earlier life, he always loved the farms. He knew the stock market and followed it religiously on the farming side. He did have a farm, cattle, that he loved to go to, because that was his place to relax.”

Andrusek said Armstrong spent his last days with family in Toronto, following a serious health event. “He was no longer attending Rideau for I guess the last two years. At that point, he was at the old age home at Orchard View. His mind was always there, but 95, he wasn’t spry anymore, physically.” Preserving the Rideau Carleton name, and installing a backlit retaining wall that will make the “RCR” logo more prominent during winners’ circle photos, are two ways that Armstrong’s legacy will stay visible during the transition to becoming “Hard Rock Casino Ottawa” in the coming years.

Losing Armstrong marks the end of an era.

“I remember the club. I was part of the club,” said a wistful Andrusek. “You’re talking about Hugh Mitchell. You’re talking about Charles Juravinski. Characters. I could go on: Tom Joy, Dr. [Ted] Clake. They were passionate about their tracks, passionate about racing. As you see the tracks now go into a more corporate mode, it’s sad, because you don’t see that anymore.”

What would Warren Armstrong want? “I think the thing that he always conveyed to me and Graeme Mitchell, when we would go visit him, was keep racing going. Don’t let it just be a casino.”

There will be a moment of silence and a video tribute at Rideau Carleton this Sunday (Sept. 5). “We’re in the process of planning a [public] celebration of his life at the end of September,” Gardner told HRU. “To be respectful, it should be here, because this is where he loved to be more than anywhere else.”