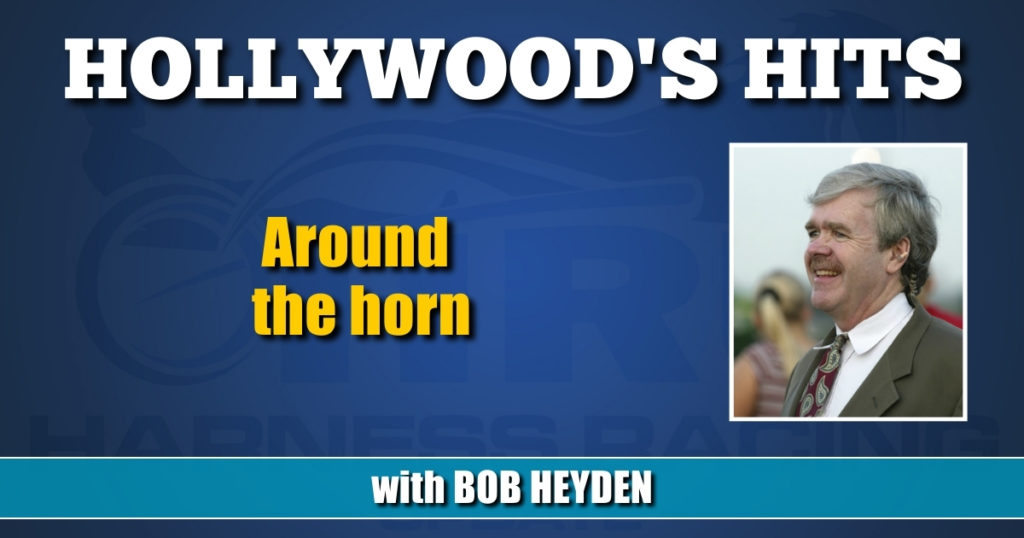 Can Charlie May do what What The Hill did in 2017? Can he go from being disqualified in the biggest dance on his card yet still win the division title? It’s certainly not out of the question.

Lawless Shadow nose his way around

Lawless Shadow is certainly taking advantage of the nose photos this summer. He finished a nose in front of favored Perfect Sting in the Meadowlands Pace for second, then was elevated to first via the DQ of Charlie May. Then he held off “Sting” on Sun Stakes Day by a nose again. Remember, too, that tight photos were commonplace for “Sting” in 2020 with his first and last start both being dead heats.

75th anniversary of the introduction of the starting gate

The starting gate debuted in 1946 at Roosevelt Raceway. No longer would there be scenarios like there was in 1930 when a Hambletonian heat took 50 minutes to get going. The car carrying a gate with a wingspan of 70 feet was now a reality. From the Dec. 11, 1946 Hoof Beats, Steve Phillips, its founder, wrote, “Thanks To All Horsemen For Helping Me Advance My Theory Of The Phillips Starting Gate.”

It’s been a quarter century plus one since we lost the great gelding Rambling Willie. (August, 1995) “The Horse That God Loved”. Twice the all-time earnings leader both before and after Niatross assumed the honor, the gelding rose from obscurity to become a household name in the sport, racing from 1972 to 1983. $2.01 million later he retired to Kentucky Horse Park.

The filly Darlene Hanover storming across the wire on Sun Stakes Day at Pocono immediately invoked thoughts of Charlie Keller who had passed earlier that week. Yankeeland was part of the ownership — and Charlie was Yankeeland Farms. Inherited from his father, who passed a half century ago, Charlie carried the banner well. A calming presence, Charlie was welcome anywhere. But you had to pull it out of Charlie if you ever wanted him to talk about himself — with one exception. On Hall Of Fame night in 2013 when he and Gene Michael met in the lobby in Goshen. They hadn’t seen each other since the early 1960s playing minor league baseball and had some catching up to do. Charlie will be sorely missed.

Manchego is leading the pack at the 2/3rds mark of 2021 for Horse of the Year honors. Let’s see if she can hold on. She’s 6, the same age Moni Maker was the last time she was named HOY in 1999 — her second straight such honor. Through 63 races in their careers Manchego is 39-for-63 while Moni Maker was 40-for-63. Moni Maker won five races on Hambletonian Day an all-time best. Manchego just won her fourth race on Hambletonian Day.

Bella Bellini, the only homebred filly in the 2021 Hambletonian Oaks, won it.

The fourth homebred in the last eight, seventh in the last 17 editions and 16th in the 51 overall editions of the Hambletonian Oaks.

Ten standardbreds have won at least two HOY titles — four of the 10 did not start off with the barn they won with.

Moni Maker started with Bill Andrews and winding up under the care of Jimmy Takter 1998-1999 HOY.

Adios Butler started with George Phalen for his first four career starts then onto the Eddie Cobb/Paige West barn 1960-1961 HOY.

Albatross started with Harry Harvey before winding up with Stanley Dancer for a pair of HOY campaigns in 1971-1972.