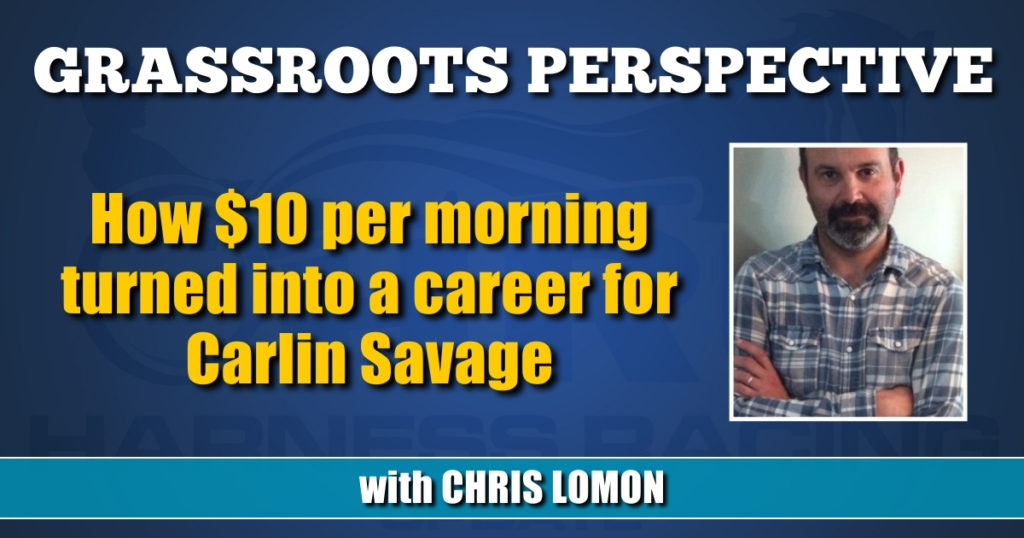 How $10 per morning turned into a career for Carlin Savage

The young horsewoman started working as a groom for her grandfather, Ron Savage, and now trains a 10-horse stable with her boyfriend Ed Gannon Jr.

It was a harness racing offer a young Carlin Savage couldn’t refuse.

A couple of years before she reached the teenage ranks, the young girl from Salisbury, MD, gladly accepted a job working mornings for her grandfather at a standardbred barn.

Working with horses, plus a good wage, made the decision to accept the gig rather easy.

“My grandfather, Ron Savage, was in racing forever,” she said. “He had horses throughout the ‘70s and ‘80s. He eventually got out of it, but one of his older owners sent him horse, basically to give him something to do. The horse was a little mare. My grandfather hired me to work for him for $10 a morning, six days a week. I guess that’s basically where it started. I really enjoyed that whole experience.”

She might not have known it then, but she had already caught the standardbred racing bug.

“I’ve been around horses my whole life. I’ve been riding since I was seven and I rode throughout college. The harness side of it, I was probably 11 when I worked alongside my grandfather. When you make $10 a morning, that’s big money when you’re a kid. And when you are around the horses, you really develop a connection with each one.”

Although the horse, Imsuchagrrrrlygrl, didn’t have much of a racing career, the daughter of Real Desire proved to be a life changer for a young girl who was becoming more and more enamored with the standardbred world.

“She raced at the Pocomoke Fair (Maryland) and finished second. For a young kid, that’s an amazing thing to see.”

For someone wondering what they would do for a living, it was an eye-opening moment, to say the least.

“My grandfather made the decision to buy two yearlings,” said Savage. “My dad [Ed Savage] fell in love with racing too and I came on board, just a little bit, helping as a groom. Girlfriend Bash, the first horse I owned – I actually still own her – was a high school graduation gift from my grandfather. When that happened, I was kind of hooked.

“I was still grooming and paddocking for my dad throughout college. I went to the racetrack when I could. When I got out of school, I went to work with my dad full-time. That’s when I got my trainer’s license. I stayed with my dad for two or three years, and was traveling to Delaware a lot more with the horses. Once he got out of racing, I decided to stay involved.”

These days, Savage is working alongside her boyfriend, trainer Ed Gannon Jr.

Her role encompasses a little bit of everything.

“We’ve been together as a couple and in racing for four years this winter. He’s the head trainer, so I guess I would be considered the second trainer. We have 10 horses. I own two of them, he owns two of them and the rest are other owners.”

Their relationship, working and otherwise, is strong.

The key to that happiness, noted Savage, is enjoying their time together outside of racing and also getting the most of their time spent apart.

“It’s nice because you get to see each other a lot. If you were dating someone outside of the industry, it could be tough because you’d never see one another because of what we do and the lifestyle we live. But it also works because on any given day, one of us could be on the road going to place like Chester, while the other one stays put. It gives each of us a few hours of having our own time, a chance to relax and unwind by yourself. We make it work.”

Horse talk, at least on the home front, is kept to a minimum.

Their competitive ways do come out on occasion. A prime example of that came not too long ago.

“We’re big movie people, so we’ll go to the movies when we can. We don’t get a lot of time off, but we do try to get away on vacation for a week each year. Friends of ours have a pool and a boat, so we love doing that. During the summer, there’s a place down the road that has ice cream, and there’s a mini-golf course. And yes, we are 100 per cent competitive with another in anything we do outside of racing.”

Fortunately, it’s a trait that continues to serve Savage and Gannon well, both individually, and collectively, when it comes to their horses.

As for those horses, Savage is grateful to be around them every day, much like she was when she had that $10-a-morning gig.

“I do take pride in what I do. I take pride in caring for all of my horses and making sure they are treated well and with respect, and in how they look and feel. That’s very important to me. If they don’t look good or feel good, I take that very personally. The horses mean the world to me.”

That group would include Girlfriend Bash.

“She raced until she was nine and she made over $100,000. I’m so grateful for her. She was like a guinea pig for me. She taught me so much. She taught me how to train, how to jog, and how to do so many things. She had a colt last year and he’ll be broke this year. That will be another great adventure.”

One of many she’s already had and certainly one of many more to come.

“I’m happy with how everything has turned out. I’m very grateful for all of it.”