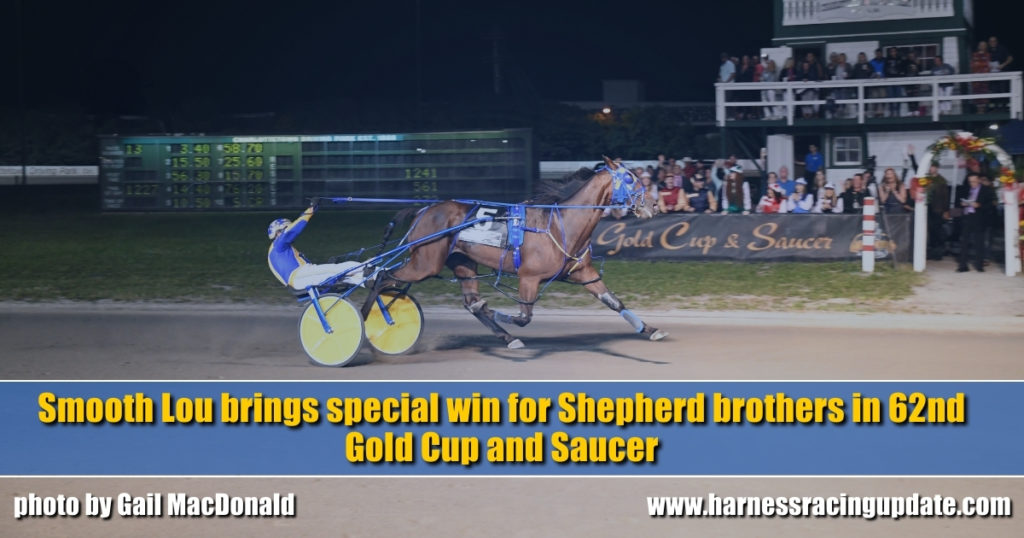 Only nine pacers go behind the Red Shores Charlottetown starting gate each year for the Guardian Gold Cup and Saucer. This year, that meant adding a third elimination (Gold Cup Trial) to decide among the talented group of 18 horses and geldings entered. It was a decade ago (2011) that three Gold Cup Trials were last required.

There’s never been a sub-1:50 mile at the Charlottetown Driving Park; they remain a relative rarity over half-mile tracks, with Somebeachsomewhere’s 1:49.2h at Flamboro Downs and This Is The Plan’s 1:49.1h at Hippodrome 3R the only examples among Canadian track records. As an incentive, a sponsor ponied up to encourage Gold Cup and Saucer finalists to “Smash the Track Record for $5,000”: the winning owner would receive the cash prize from Warren Ellis and family of Summerside Chrysler Dodge, if their horse won in 1:50 or faster.

The nine finalists had the collective speed to do it, yet none had set a previous sub-1:50 personal best on a half. The conditions were right: Daisy River (Jason Hughes) edged out male and female track record holders Freddie and Cheeky Little Minx to rewrite the overall track record in the 1:56.1h Colonel Dan Trot.

Marc Campbell was presented with the 2021 Francis McIsaac Memorial Trophy, earning 163 points over Old Home Week. It is awarded annually and named in honour of the late horseman who took the title ten times in his career. Unfortunately, Campbell’s trainee Time to Dance drew post #8 for the Gold Cup and Saucer, making the prospects of a repeat statistically unlikely.

Under the spotlight, before a smaller but still sizable crowd, the field went postward after midnight.

Five horses left aggressively, but it was rail horse Somewhere Fancy who rocketed to the lead for Dave Dowling. #2 Legion Seelster (Richard Simard) followed in the pocket; a first-over #5 Smooth Lou was quickly rolled back into fifth along the pylons by Robert Shepherd, launching again as Vance Cameron called the “Boom! Just like that!” :27.1 opening quarter. Shepherd’s horse gained steadily to the :56.1 half, towing second-over #7 Ideal Perception (Gilles Barrieau) into the hunt, as #1 Somewhere Fancy maintained control up front. By the 1:24.1 three-quarters, Smooth Lou was drawing clear, opening up by over five lengths at the wire. Ideal Perception was the place finisher, ahead of #6 Legion Seelster. The winner returned $10.50 as second choice among bettors. Favourite Somewhere Fancy finished fifth, behind #3 Racemup.

The 1:51.1h winning time didn’t break any records, but didn’t need to. It ended a long wait for trainer Patrick Shepherd. He told HRU, “It’s a little bit different this year. We spent a lot of money and talked to a lot of places (to find the right horse)… It’s just a dream come true.”

He praised Smooth Lou (p, 5, 1:48.4s; $137,381 before tonight’s start) and the connections who helped him land his first Gold Cup champion: “Ron [Burke] and Mark Weaver, if it wasn’t for them, I wouldn’t be here right now. They put this horse together for me and sent a list [of potential horses for the big race]. Things just really came together really good. Mark Weaver said to me he always wanted a Sweet Lou to win the Gold Cup.”

Five-year-old gelding Smooth Lou (Sweet Lou—Smooth Silver) was bred by Brittany Farms LLC. This was his seventh win of 2021. He’s owned by Triple S Equine with Robert and Ronald Woodburn, ON.

Smooth Lou will now enjoy a brief vacation: “We’re just going to give him a little bit of a break now and see how he comes back, and just go from there, one step at a time,” said his trainer.

Patrick choked up describing what the race meant to his family, and how winning with his brother Robert in the sulky was the icing on the cake. “Well, that means the most to me. It’s been a while since my brother pulled a line over one of my horse’s backs, so it’s great that we’re back together. It’s been a good couple of weeks.”

How long has Patrick wanted to win this race?

Robert Shepherd expressed post-race concerns that he may not have made the front with Smooth Lou, but both stayed cool and collected in the patient overland trip.

“A little bit,” he chuckled on the walk to the winner’s circle. “Somewhere Fancy’s a nice horse.”

The significance of the win can’t be overstated for Island-born-and-raised horsemen like the Shepherds. “We grew up in it, and we’re away [competing in Ontario], but we come home every year for this race,” Robert said.

The fact that Smooth Lou had been Hoosier Park-based until late July was no worry for his driver:

“Patrick said he trained him over a half, and Ron Burke said he was great over any size track. He’s a great-gaited, big horse.”

And now he is the 2021 Gold Cup and Saucer champion, for a grateful PEI family.