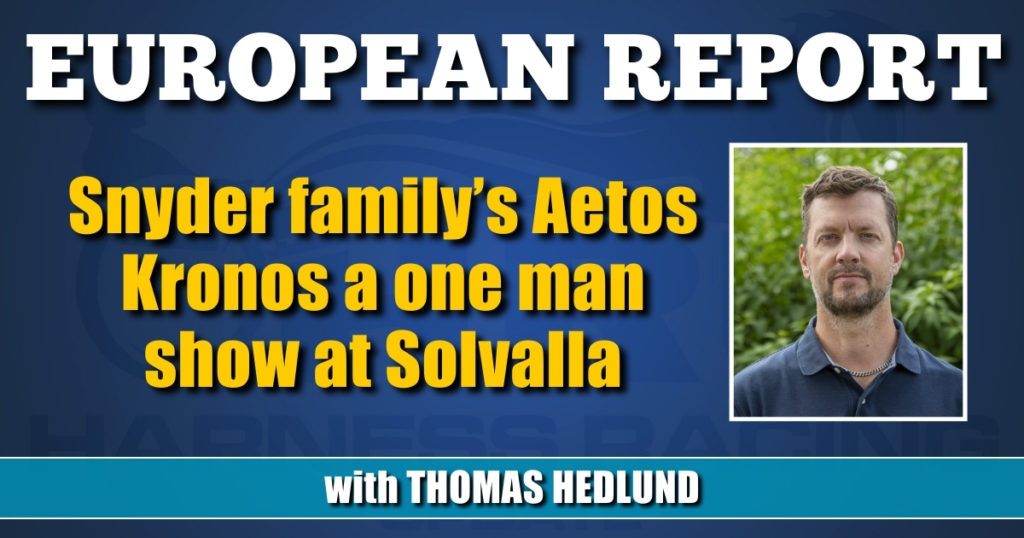 Snyder family’s Aetos Kronos a one horse show at Solvalla

Jerry Riordan’s 5-year-old Aetos Kronos (Bold Eagle) — owned in part by Jeffrey Snyder and family of New York — has belonged in the top of the Swedish-bred 2016 crop since he was 3 and in $345,000 Jubileumspokalen at Solvalla on Wednesday (Aug. 18) night, the Bold Eagle son beat some of the best 5-year-olds in Europe.

We didn’t see participation from France in Jubileumspokalen, but besides that, many of the most merited 5-year-olds in Europe gathered behind the gate over 1.3 miles at Solvalla.

Surprisingly, five of the 10 participants in the race made breaks in some part of the race, two of them at an early stage as both Axl Rose and Admiral As disappeared before the first turn.

Hail Mary couldn’t get his gait together at any stage of the race and Robert Bergh’s trotter had to face position first over after a short break during the first quarter.

Magnus A Djuse is one of the most talented young drivers that has climbed the ladder of success the past two, three years and Riordan is not unfamiliar with entrusting new, upcoming drivers for his horses. Djuse knows Aetos Kronos well. The duo participated in Elitloppet in May and when Jubileumspokalen went off, Djuse sent Aetos Kronos to the lead and despite a very quick opening the first 500 meters (and first 5/8, with a mile rate of 1:53.2), Aetos Kronos pulverized his opponents during the last kilometer.

Jerry Riordan’s trotter just flew away from the chasers in the last turn and over the stretch of Solvalla, the stage was all Aetos Kronos’. The horse came home in an equaling world record performance (same as Readly Express in the same race 2017) over 1.3 miles as he noted a mile rate of impressive 1:52.2.

Aetos Kronos, partly owned by American Jeff Snyder, who was visiting Solvalla, has collected several group 1-wins in his career and by purse, the victory at Solvalla on Wednesday night was his biggest so far.

Elitloppet winner Don Fanucci Zet finished strongly as runner up after a trip far back in the field while Click Bait held well after a pocket trip.

The $230,000 European Championship for Mares was on the Wednesday’s (Aug. 18) race card at Solvalla and the outcome of the race was like written in the stars.

Norwegian trainer Trond Andersen, who recently died at an age of 58, had 7-year-old Miracle Tile (Cantab Hall) in his barn and when driver Erik Adielsson served the mare a perfect pocket trip, she answered by disarming leader and first choice Mellby Free over the stretch.

Adielsson was emotional in the winner’s circle after the race and the entire Norwegian harness racing business must have cried tears of joy when Miracle Tile claimed the prestigious title. Andersen’s companion for many years, Kristian Malmin, is now the trainer of the mare.

The $152,000 Prix Jean-Luc Lagardere at Paris track Enghien became a quite messy story over 1.7 miles and as many times before in France, Jean-Michel Bazire claimed the title, this time paired with his chestnut Dorgos de Guez (Romcok de Guez), who found enough space to sprint to victory with less than 150 meters to go.

Dorgos de Guez was placed fourth on the inside and had many lengths to collect to the front horses at mid-stretch, but Bazire was very calm in the bike and trusted his horse as the duo got closer to the leaders just 50 meters ahead of the wire.