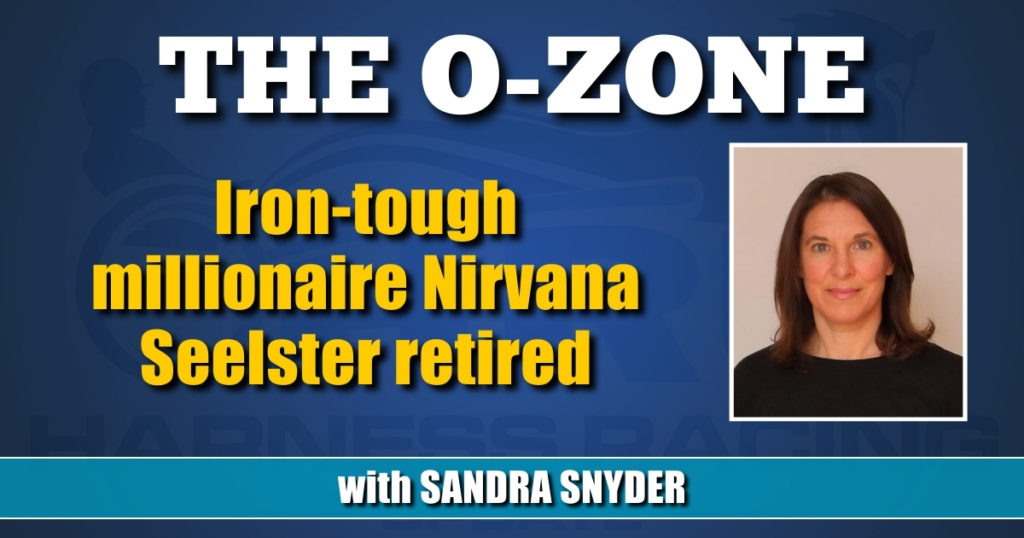 After seven years of waging weekly battles with the very best pacers in Ontario, the iron tough Nirvana Seelster has ceded the field of play.

“He’s out with a pony on the farm. He’ll always have a home,” said trainer Bill Budd. “They’ll put a saddle on him once and a while and ride him. He likes that, too.”

Nirvana Seelster made his last appearance in an overnight on Sept. 12, 2020, and after a winter of rest and relaxation Budd tested the gelding in two qualifiers this spring before calling owner Bruce Davy and telling him the old warhorse had fought his last battle. Week in and week out for the better part of seven years, the son of Camluck and No Strikes Against competed in the top classes at Woodbine and Mohawk Park, taking on the who’s who of Ontario racing.

“He raced against some great horses, had some great duels coming down the stretch. He far exceeded any expectations I had, was just fantastic,” said Davy. “He wasn’t what you call a super horse, he was just real good. He never stood out, never won by a great margin, but he was always there.”

From 2014 to 2020, Nirvana Seelster made 241 starts. He won 46 times, was second on 47 occasions and third 40 times. He banked $1.2 million for Davy, who picked him up for $6,500 when previous owners Dave Menary, Kenneth Ewen, Denis Breton and Brad Gray listed him for sale in January of his 3-year-old year. The original partners had purchased Nirvana Seelster for $77,000 from the 2012 Forest City Yearling Sale, but the pacer had failed to advance far enough in his training to qualify as a 2-year-old.

Budd sent him behind the gate for his first lifetime start on the last day of March, 2014 and Nirvana Seelster made his first appearance in the Woodbine Racetrack winner’s circle two weeks later. The gelding would make five appearances in the Ontario Sires Stakes Grassroots program that summer, winning twice, both with heroic late sprints.

Between the Grassroots Championship, where Nirvana Seelster finished third, and the Ontario Boys Series in February, the gelding had learned how to leave and he went gate-to-wire in both legs and the final of the Ontario Boys.

“He just progressively kept getting better,” said Davy. “He was a finisher and then of course he got that he could leave, and he was just one great horse to be around.”

By the end of his 4-year-old season Nirvana Seelster had joined the preferred ranks and he spent most of the next five years racing in that class, taking on future millionaires like Evenin Of Pleasure, Fool Me Once, McWicked, Nickle Bag, Sintra and State Treasurer. He never won another open stake event, coming close twice in the Mohawk Gold Cup (2017 and 2019), but he did deal Lazarus N a memorable defeat in September 2018.

“He got a standing ovation for that,” said Budd. “I said we can’t go much higher here you know; to beat a horse like that.”

After qualifying to start his career, Nirvana Seelster did not set foot in another qualifier until May of his eight-year-old season and he did not qualify again until this spring. The pacer clocked his 1:48 personal best in a Sept. 23, 2017 preferred, keeping a neck in front of Easy Lover Hanover and Sintra off a front-end effort for driver Trevor Henry.

Over his seven-year career Nirvana Seelster was driven by many of Woodbine Mohawk Park’s top reinsman, but the regulars were Henry, Phil Hudon and Rick Zeron, and Budd and Davy are grateful to each of the horsemen who contributed to the pacer’s success and longevity.

Along the way there were suitors for the preferred class regular, but Davy got involved with racing because of his affection for horses and he was never tempted to part with Nirvana Seelster.

“He had a couple offers on him and Bruce didn’t want to sell him,” said Budd. “He was offered big money for him, but he just said, ‘No, I think I’ll hang on to him.’”

With Nirvana Seelster’s retirement, Davy has just one horse in training. Three-year-old pacing filly Postscript put together a record of one win, one second and three thirds in 12 starts for earnings of $67,203 after the Brockville, ON resident purchased her last July, but she has yet to cash a check in four sophomore starts. The long-time owner said the Sportswriter daughter could be his last racehorse, especially if current public health restrictions continue into 2022.

“We’re winding right down. With COVID a lot of the fun has gone out of it. I’ve owned her for over a year and never seen her,” said the 83-year-old owner, who recently moved Postscript to Budd’s barn. “I live four hours away from the Mohawk track and you can’t go there and go in the barns or anything, so it’s not the same.”

Budd said plans are afoot for a commemorative race at Woodbine Mohawk Park to mark the gelding’s retirement and Davy will definitely make the trip west for that event; one last celebration of the best horse he has ever owned.

With the recent announcement of $1.16 million winner Easy Lover Hanover’s retirement by trainer Ben Wallace and owner Brad Grant, there is a changing of the guard taking place in Woodbine Mohawk Park’s top classes. New faces like Warrawee Vital, Century Farroh and Matticulous GB have begun to battle in what Davy calls the ‘Saturday Night Special,’ but the youngsters have a long way to go before they can be referenced in the same company as the recently retired warriors.

“He’s just been a great horse,” said Budd. “He’d do anything for you. He was always there. Old Nirvana, he’s the best.”