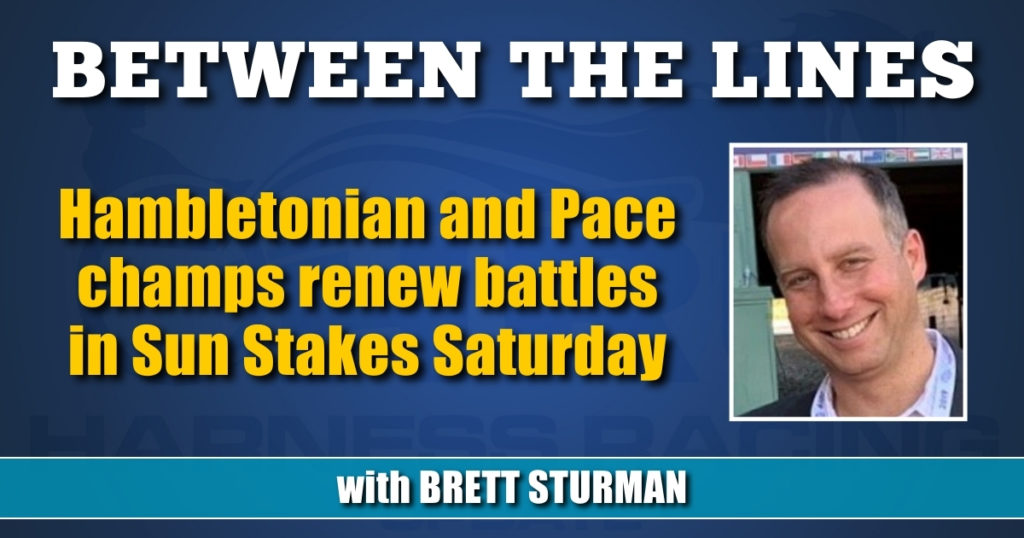 Hambletonian hero Captain Corey and Meadowlands Pace victor Lawless Shadow are amongst an ultra-talented cast that will be on display throughout Sun Stakes Saturday at The Downs at Mohegan Sun Pocono on Aug. 21. In addition to the co-$300,000 Earl Beal and Max Hempt races that those two horses will respectively headline, the card also features the Delmonica Hanover and James Lynch, both of which go for $250,000.

Those four races, plus a couple of other invitationals on the card for older pacers and trotters could directly influence the ever-changing state of those divisional races.

Starting with the Earl Beal, Captain Corey makes his first start since his Hambletonian success two weeks ago and has solidified himself as the sport’s top 3-year-old colt or gelding trotter. In fact, his Hambletonian win has vaulted him all the way up to the #2 spot in this week’s Hambletonian Society/Breeders Crown poll, ranking only behind a near unanimous Manchego. Captain Corey knows this track as well as any, and his form since the Dancer in July has been exquisite. He continues to bolster his own credentials while growing the legend of his sire Googoo Gaagaa, who coincidentally won this very race here in 2012.

The last time Captain Corey was seen at Pocono was on May 31 when he won a PA sire stake division by over 10 lengths. Svanstedt has continuously driven this one with a take-no-prisoners approach and it seems all but inevitable he’ll be the one controlling the race from the top once again. He shouldn’t have much trouble making the lead from post 2 and could intimidate a few others with speed from the outside; seems too good to lose right now especially considering a favorable environment and will look to further his grip on the division.

The main challenger for Captain Corey in the Beal could come from the horse starting immediately to his outside, stablemate Delayed Hanover. It’s back to Dexter Dunn for Delayed Hanover, and that was an impressive Hambletonian elimination win the last time these two were paired together. Of course, Yannick Gingras gave Delayed Hanover an ideal two-hole trip in the Hambletonian and Delayed Hanover simply couldn’t gain on Captain Corey from that spot when it counted and had to settle for a close enough fourth. A similar fate was encountered by the third Svanstedt trainee in this race Johan Palema in his Hambletonian elimination. He too sat a pocket trip behind Captain Corey only to weaken once into the stretch. The race before Johan Palema beat a few impressive foes in 1:50.4 and I hate to put too much stock into one race, but that last one was tough to figure. Sears put a perfect trip on Sonofamistery in the Hambletonian but couldn’t advance off second-over cover. In Range has been a hard luck horse this year. Spy Booth angled to the inside in the late stages of the Hambletonian and was making some inroads; $273,082 career earner is still a maiden.

On the fillies’ side of the 3-year-old pacers, Hot Mess Express enters the James Lynch unbeaten on the year with a 7-for-7 record, though is listed as the third choice in the program coming out of the daunting outside post 9. I thought it was a cinch she’d be favored despite what I thought was an inaccurate 4-1 morning line, but peers on social media seemed to strongly think otherwise. She’s already beaten her main rivals in here between the Nadia Lobell and Mistletoe Shalee, but to the earlier point, the outside post won’t make it easy. Currently, she sits a couple notches ahead of the Pelling-trained Test Of Faith in the Hambletonian/Breeders Crown and while there’s a long way to go in the season, another major win in this circumstance would make a lasting impression.

Elsewhere in the Lynch, Fire Start Hanover raced at Pocono last week and lost at odds of 1-9 for the second straight week. And I hate to be negative, especially on recurring topics, but the effort she received last out was disgraceful. Sent off as the heaviest of favorites in a field of six, Dunn elected to take her off the gate and get away sixth and last. With predictable dull cover with longshots in front of her, she was still last approaching the three quarters and even the announcer was incredulous, speaking how she was ten lengths away with the entire field still to pass. It’s all just silly at this point. Even if she wanted an easy race following the prior week’s 1-9 defeat in the Shady Daisy, it’s not like she would have faced any real opposition in going to the front or controlling the pace in that Pocono race last week. At any rate, she remains sharp and should attract attention off that 5-1 morning line. Grace Hill went a big mile two back at the Meadowlands and then won in another sub-1:50 time last weekend here; hasn’t been able to figure out Hot Mess Express yet this year but if there was ever a time to do so it would be now. Blue Diamond Eyes goes for four in a row and has never been better.

Almost all the big guns are racing in the Max Hempt ,except for the top-ranked sophomore pacing colt or gelding, Charlie May. Though Charlie May leads the way in the division following backside bull rush in the Milstein at Northfield last weekend, several of the horses in the Hempt can further elevate their divisional status with a win.

For starters, Lawless Shadow returns Stateside after his elevated win in the Meadowlands Pace. After getting nailed two back at Georgian Downs where both he and Bulldog Hanover were upset by Desperate Man, he ended up parked in his most recent at Woodbine. He gets Mark MacDonald back and a Hempt win would be a solid addition to his resume. Nothing against Perfect Sting, but I usually let him beat me if he can considering the short prices he typically offers. Perhaps not as dominant as he was at 2, he’s still a force week in and week out against these and it’s still possible for him to repeat as divisional champion if he can get hot. Hellabalou picked up Tetrick for the Adios final and that was an emotional win for the connections; has proven himself quite a bit since that 81-1 Pace elimination win. That was some first-over mile from Rockyroad Hanover in the Cane Pace to wear down Perfect Sting. He had late pace two back in the Adios as well and is another possibility despite an outside post. Southwind Gendry was better late in his most recent when adding Lasix for the first time. American Courage picked up a confidence building win at Yonkers last out; maybe he’s just more suited towards a smaller track.

In the Delmonica Hanover for 3-year-old filly trotters is an opportunity for someone to step up to potentially go on and eventually challenge Hambletonian Oaks winner Bella Bellini. You Ato Dream had the misfortune of drawing an impossible spot in the Oaks and likely still remains sharp. She was resolute a few back in holding off Lady Chaos and others and will be greatly aided in here by starting from the rail. Mazzarati has been slow to get things on track this year but that try last out in the Continentalvictory was her best try yet when losing to only the pocket sitter in a two-horse breakaway; picks up Tetrick. She was beaten last out in that race by May Karp who was impressive in gliding by from the pocket. Flawless Country seems bound to be involved and rates as the program favorite as part of the entry but is still yet to finish better than third in seven starts this year. Darlene Hanover hasn’t been overly impressive in her last few but she’s talented enough to win in a spot like this.