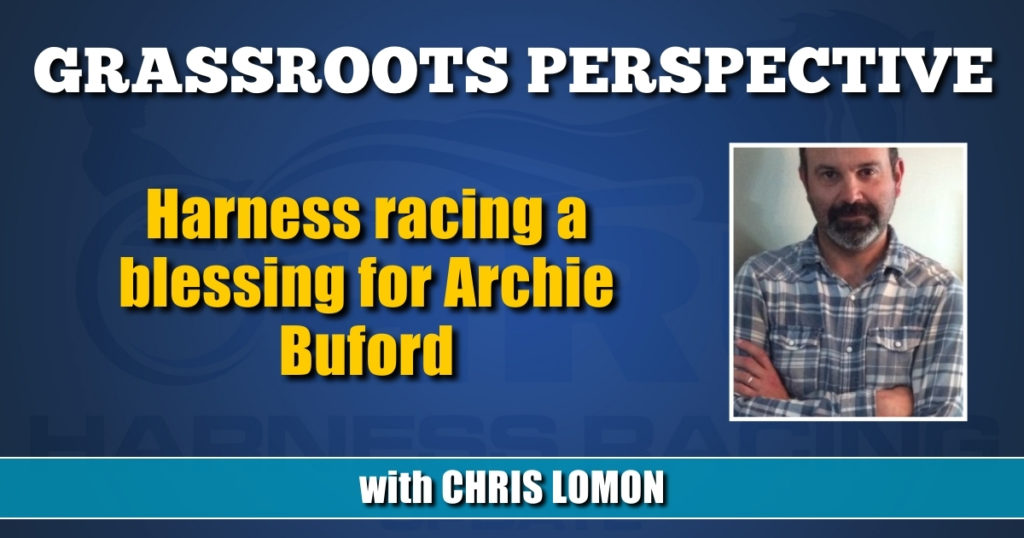 The sport’s leading UDRS driver with 300 or fewer starts said the good and bad both on and off the racetrack would make for a compelling book he hopes to write.

Of all the things that harness racing is to Archie Buford, “a blessing” is no doubt atop his list.

The man from Jackson, MS, has a story to tell, one that he is eager to share with the world, but not quite yet.

A book about his life, on and off the racetrack — good times and bad — might soon be in the works.

“I really do have a story to tell. I don’t want to share the details of it now. But I do have something in the making. I’m hoping to get a book out so that I can tell that story.”

The latest chapter in his standardbred life is most compelling.

After six years away from the racetrack, Buford returned to the driver’s seat in 2021, back to a place where he has always felt the happiest and most content.

That peace of mind has translated into big numbers in the race bike, eye-catching stats that Buford, who is presently in Illinois competing, has compiled racing on fair circuits across the U.S. this year. He’s also picking up a few drives here and there at Hawthorne.

Add it all up and Buford is the currently leading UDRS driver in North America with 300 or fewer starts.

Those gaudy stats have created confidence, not conceit, for a man who was first introduced to horse racing before he reached his teenage years.

A racetrack, certainly no farther than an opening half-mile from his home, caught his attention a little over 20 years ago.

He had no familial ties to the sport, but the more time he spent watching horses storm down the lane, the more Buford wondered what it would be like to be in the middle of the action.

“I love harness racing. I didn’t grow up in it, but when I was around 12, there was a track built that was so close to my house in Terry, Mississippi. It was a blessing to have it there. It’s called Cooper Downs. Actually, I started racing horses under the saddle. That’s how it really all started with the horses. My friends and I would go out and race on the dirt roads.”

A few twists and turns later, the 5-foot-6, 155-pounder saw his standardbred dream realized when he drove and trained his first pacers and trotters in 2007.

“Eventually, I found my way into harness racing. I got a couple of horses and it took off from there for me.”

He is grateful for the support of many, including another Mississippi horseman.

“I think the secret of my success is Mr. Roshun Trigg,” said Buford, of the horse owner and trainer who has fared extremely well on the fair circuit for a number of years. “When I started I went to Hawthorne and had to get a few qualifying drives in order to get my pari-mutuel license. I got it done, and throughout it all, he was very supportive and really helped me a lot. I’m very thankful for the faith he has in me.”

Buford, whose brothers own quarter horses, also has unwavering faith in himself.

The driving colors he sports are a perfect look for the man with the big smile and colorful personality.

He had one particular must-have in mind when it came to the design.

“I have always been the type of guy who likes to be different. I was thinking to myself, ‘I always liked green and orange.’ So, I put that combination together and that’s what I was going to go with. I like the way it turned out. I think it really reflects my personality.”

Life, Buford will gladly tell you, is very good for him these days.

And not just on the racetrack.

When he’s not sitting behind a 900-pound standardbred, he’s sitting at the wheel of an 18-wheeler, his own truck, hauling logs throughout the southeastern U.S.

The long hours and sometime lonely roads never bring the 34-year-old down.

“I have my own company and I haul those big logs for a living. It’s not an easy job, but I’m not complaining. When you are driving, you have a lot of time to think, and I think about harness racing a lot.”

What could hauling logs and harness racing ever share in common?

“There are definitely similarities between the two. It all starts with hard work. It takes hard work and dedication to do both things. And nothing comes easy in either business. You have to put in the time to be successful.”

The family man – he has a son, 13-year-old Arzavion – has remained grounded in spite of his winning ways in the sulky.

Buford, as he always has, never likes to look too far down the road.

“I’m the type of person that just likes to go with the flow. I try not to put the buggy before the horse. I take it as it comes. I set goals, but I don’t make plans. When I do that, it always works out well in the end.”

It’s one of many things he’ll no doubt share in the book he’s determined to see become a reality.

For now, he’ll channel his energies into racing. Soon enough, though, he’ll find time for that book.

As for its title, consider it a work in progress.

“It’s the conversation I just had with my aunt. She told me the title of the book is so important. I haven’t put that much thought into what that would be. When the racing season is over in Illinois and I go back home, I’m going to put some thought into it and focus on it. I really want to share my story with people.”

A story about how harness racing has been the ultimate game changer for the man from Mississippi.

“I look at it as a blessing. Not so long ago, I was dreaming about harness racing. Now, I’m living it. The dream has become a reality. Life isn’t good, life is great.”