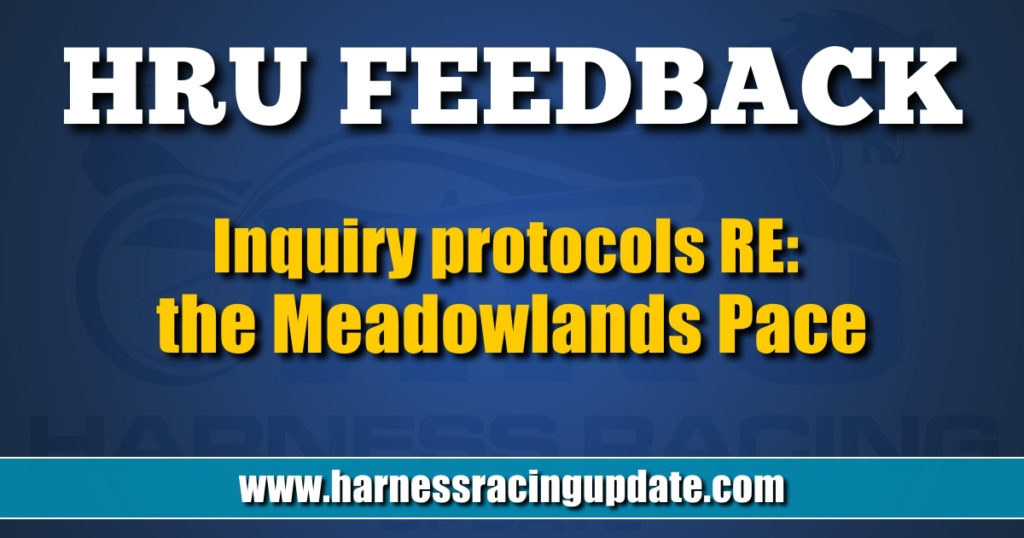 Inquiry protocols RE: the Meadowlands Pace

This issue is recent history but has been on my mind since the race.

Everyday decisions small and large inexpensive or costly are pragmatically resolved when all the factors are considered. Whether you are purchasing a home, deciding on a school for your children or looking into disqualifying a winner in a major stakes race every morsal of information is useful.

I have mentored many during my 30 years in the judges’ stand have always stressed talking to the drivers before making a decision that could cost an owner, trainer and driver a purse check.

Even if the interference is obvious, I talk to the drivers and I can say there have been rare instances where I have been surprised by an important factor unseen in the replay. A call from a driver after the official is posted informing you of an issue that could have influenced your decision is a presiding judge’s nightmare.

This practice of not acquiring information from drivers during an inquiry has developed in the last decade based on the premise that the drivers never tell the truth. I agree. In 30 years, I can recall two inquiries where the drivers said straight out, they caused the interference. Otherwise it’s a debate. The presiding judge in most instances can use all angles of the replay to get a straight answer. Talk to all the drivers involved, question their actions. A common question I have asked many drivers is “are we looking at the same replay?”

Use your experience, the replay and input from the drivers and make the call.

An appeal of an inquiry and subsequent placing in a major stake sans proper protocol was inevitable.

The problem with separate betting entries

If you would like another glaring example of the same trainer having two horses in the race under separate betting, here it is again.

Have your experts watch this race and tell me this shouldn’t stir up the bettors who had all their money on the heavy favorite.

Burke’s other horse goes to the front from the 7 post. Miller is back fifth on the rail and is fighting his horse as the horse wants to go out. He holds the horse in as the parade goes on by him and he is sitting in locked on the rail near the back. The fact that his horse races up the inside for third is meaningless to the bettors and is more so just an insult. Burke’s other horse hangs on for the win.

Can anyone, and I mean Miller should, explain to the judges why he did not move his horse when he had a chance. Especially when, by appearances, the horse was trying to go. As a bettor on the favorite I definitely feel cheated. If the top trainer and drivers are doing this, then the sport is in trouble.

As a 50-year bettor I am ready to leave this sport for good.