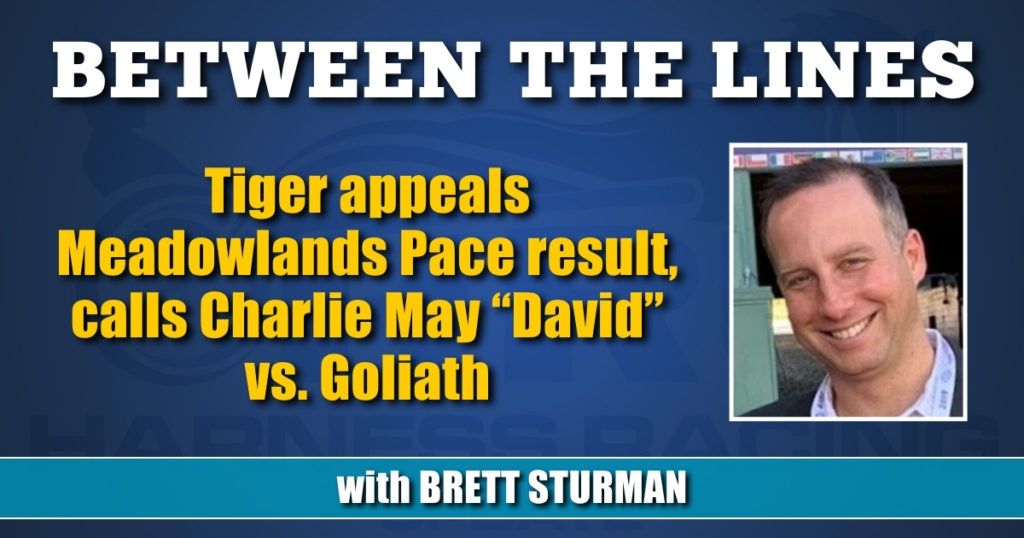 The owner of homebred Charlie May believes judges that disqualified his horse for interference made a mistake not interviewing the drivers.

On Monday (July 19), owner Don Tiger formally appealed the decision that resulted in a disqualification of his homebred 3-year-old gelding Charlie May in Saturday’s (July 17) $700,000 Meadowlands Pace.

Quoting the letter that was both faxed and overnighted to Meadowlands Racetrack and New Jersey Racing Commission, Tiger believes that disqualification decision that resulted in Charlie May being placed ninth after finishing first was both “arbitrary and capricious.” In requesting the audio and video tape of the race as well as the judges’ telephone call log from that day to be held as evidence, Tiger noted separately to his fellow owners, trainers, and drivers that his intent isn’t to hold up purse winnings, but to simply be able to challenge the process with material facts in hopes that the judges will reconsider their initial decision.

Speaking to Tiger on Tuesday while he was en route to provide color commentary at the Carrollton fair races in Ohio, he provided additional detail as the basis for the appeal.

“I respect people’s opinion, first off, and it’s not easy being a judge because no matter what you do somebody is going to be happy and somebody isn’t, but the main points why I filed the appeal is because the judges didn’t talk to any of the drivers after the race,” Tiger said. “And I know that’s the Meadowlands’ policy, but in a race of this magnitude on a rainy night with limited visibility, you have to be able to get the people involved that were on the racetrack. You need to be able to talk to people. My point is that the judges should go above and beyond in a race of that magnitude to get as much data as possible when making a decision. So, that’s one of the things we’re looking towards as we start producing evidence. We want the chance to provide more facts and more information and then see where it goes.”

It may come as a surprise to some that driver interviews are not standard operating procedure at the Meadowlands. And I’m certain there are times when video evidence is conclusive and there isn’t a need for judges to entertain participant input as part of a decision, but this instance seemed far from it.

The issue at hand is prior to a second-over Charlie May interfering with Rockyroad Hanover approaching the three-quarter pole and subsequently scattering the trailing horses, did he first incur interference from the first-over and bumpy gaited Southwind Gendry as the event that first kicked off the chain of interference? It’s completely within the realm of possibility that he did, but it’s incredibly difficult to know for sure.

Tiger has no doubt that Charlie May suffered interference from Southwind Gendry.

“I talked to a professional driver and he said that all you have to do is go watch Yannick Gingras (driver of Southwind Gendry) and see how he turns around in the sulky (immediately before the alleged interference). No one first up ever turns around in the sulky like that. Guys in the lead do so because you want to see where other horses are to open your horse, but he’s moving and rolling. That’s a sign that you’re in trouble and looking to notify other drivers, safety first. That’s all you need to know, and the rest is irrelevant.”

Tiger said that those drivers involved would be deposed as part of the appeal process.

“It’s about (trainer) Steve Carter, (driver) Brett Miller, Dustin Bothman and Ben Lindsey, second trainer and groom. I own Charlie May 100 per cent, but he’s their horse. And the reason I’m fighting is for those guys because it was their moment. I’m just a fan, really. But those guys, this is their livelihood, and this is what they do, and I’ll spend the money for them because they’ve done everything right by me and by Charlie May and hope that they get their day. And down the road I hope the horse continues to perform well for those guys because that’s what it’s all about.

“It’s not about the money. Who cares? I’ll make more money on these other races and I won’t even keep the money (from the Meadowlands Pace) if they put my number up. I’ll give $35,000 to the sixth through 10th place finishers because it was a crazy race, a bad environment with the weather, a lot of things happened and, in my opinion, everyone deserves at least 5 per cent of the purse.”

In hopes that the fairy tale life and career of Charlie May which began when Tiger first rescued his dam from a kill-pen and then bred her, Tiger said, “I’m hoping that the judges can get all of the people involved and get more time where you have an hour to look at it and can get input and say, ‘Alright, we made a bad decision.’ And that’s all you can do is hope for the little guy. I’m the little guy, man, I’ve got two horses, that’s it. I’ve got Charlie May and his brother, Shane Falco. And Charlie May – he’s not even a big horse – he’s a mighty mite. He’s David. And to go and do what he’s done, he needs his name in the record books. I want to see people around him happy and see what he’s accomplished.”

Perhaps channeling his own inner Shane Falco from the film, The Replacements, Tiger said, “Because the cool thing is, regardless of whatever they do, every time they play that replay and show that race, they’re always going to call Charlie May the winner. They can’t take that away from us.”