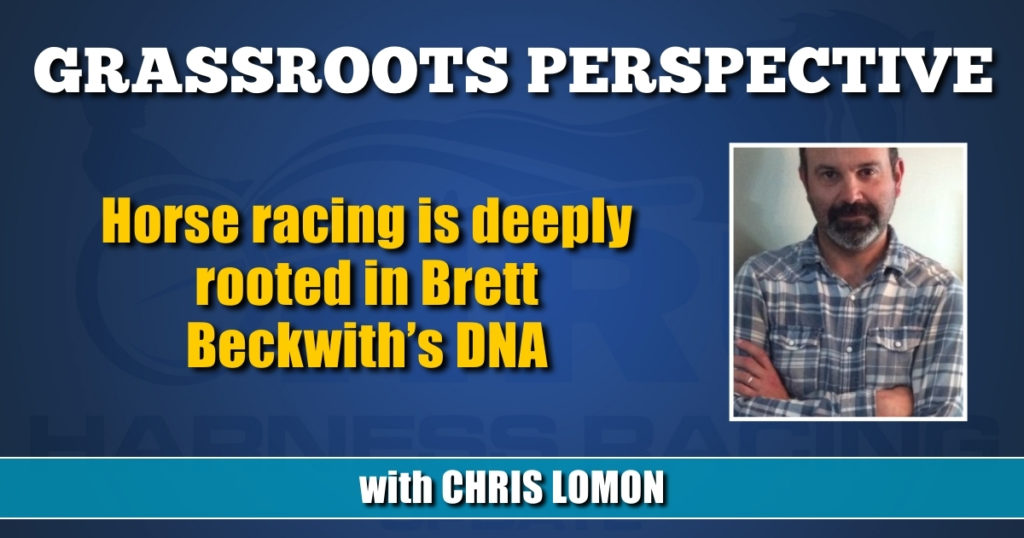 Brett Beckwith can still vividly recall the moment, the one when he knew he was going to join the ranks of standardbred racing.

Horse racing is deeply rooted in his DNA – his father Mark is a successful driver, and his mother Melissa is an accomplished trainer – but for the young man from Jersey City, NJ, the desire to carry on the family tradition wasn’t always on his radar.

Far from it, in fact.

“My mom and dad have been in the business for almost their whole life and the association to horse racing goes back generations and generations. But, honestly, I wasn’t ever really into it an awful lot when I was younger.”

All that changed, however, after a visit to The Meadowlands.

Standings railside with his grandfather, Jerry Silverman (inducted into the Harness Hall of Fame in 2019), Beckwith found himself fascinated by what he was seeing on the racetrack, but also by a particular expression he noticed.

“I had watched races there before, but there was just something that day… it’s hard to explain. I saw that my grandfather had a big smile on his face when he was watching the races and something just clicked for me. It was something I wanted to do.

“At first, I wanted to do it because I could have something in common to share with my dad, but then at some point, it turned into a career. I really fell in love with it.”

Armed with his newfound affinity for the sport, Beckwith took to the race bike with zeal, striving to make a solid first impression on the racing world.

The $8,000 race, a non-wagering affair, saw Beckwith and Dark Pool get away third before the duo grabbed the lead. Ahead by five lengths at the stretch call, the gelding — a $135,000 purchase at the 2014 Standardbred Horse Sale Company’s auction in Harrisburg, PA — sailed past the wire an eight-length winner in 1:56.

It was impressive on its own merits, even more so considering it was Beckwith’s third drive after having had only 19 qualifiers of experience. He also bested a trio of former National Amateur Driver of the Year winners in the process.

Dark Pool was trained by family friend Paul Fusco, who called upon the young reinsman after he had piloted the bay to a second-place finish two weeks prior.

Beckwith was on his way.

Posting four wins, four seconds and a pair of thirds from 25 starts in 2019, his rookie season, his performance was impressive beyond just solid numbers.

A winning attitude, in and out of the sulky, immediately caught the attention of horsepeople.

Beckwith was, and still very much is, cognizant of maintaining an even keel when it comes to his career, one that is now in high gear.

“I’m very happy with the opportunities that have come my way, for sure. I wish I could have capitalized on a couple more of them. Overall, with the opportunities that I’ve had this year, it’s pretty much beyond my expectations. This business, it’s tough. You lose more than you win and you’re only as good as your last drive. But that only pushes you to be better each time you race. One of my friends told me a while ago, ‘Don’t get too low on the lows and don’t get too high on the highs. Turn the page right after, good or bad.’ And that’s what I do. You learn from your mistakes and you build on the successes.”

Now 21, the Saratoga Springs High School alumnus has maintained his methodical and measured approach to driving, eager to set yearly goals, but not overly interested in looking too far down the lane.

It’s a formula that has served him well in a career that hasn’t reached the 500-drive plateau yet.

This year has yielded a slew of strong results, a season in which Beckwith has already surpassed a majority of the goals he set for himself ahead of 2021.

He was only too happy to make revisions to his list.

“The December before I started driving – I’m a very goal-oriented person, in general – I set out some things I wanted to accomplish. I like to set the bar and then chase after it. I always want to push myself to better than I was yesterday. I’m almost 100 per cent there with the 2021 goals I set. Now, I’ll reset goals for the rest of the year. I think you should always have something to strive for.”

It’s what Beckwith does every time he lines up behind the starter car gate.

How would he best describe his driving style?

“I don’t mind racing from the off the pace, but I don’t mind racing on the front, depending on the horse. I would say I’m not a big believer in the whip. I think there are other things you can do to get the most out of a horse. I watch every single race, and for me, I always take something away from it, good or bad. If you think you know it all, you might as well be doing something else.”

When he’s not on the racetrack, Beckwith is in the gym, working out seven days a week.

He’s also taken up golf, a sport he approaches in very much the same way he does with driving.

“I do like it. My game, it’s not great. But, I’m trying to learn. I’m a competitive person and I don’t want to play with other people until I know I’m good enough at it. I go out there by myself and try to get better each time.”

It hasn’t been that long since the day he stood at rail with his grandfather, when Beckwith realized he wanted to go from watching the action to being in the middle of it.

That recollection always gives the young driver a reason to smile.

“I’ll always remember that time. I love this sport and I love the horses. I’m glad I made the decision to become a driver.”

He’s hopeful one day that his family can stand by the finish line and watch him cross the wire a winner at The Big M.

“I’d love the chance to compete at The Meadowlands one day. It won’t be easy – there are so many talented drivers there – but I’ll keep working hard and give everything I have to be the best I can be.”