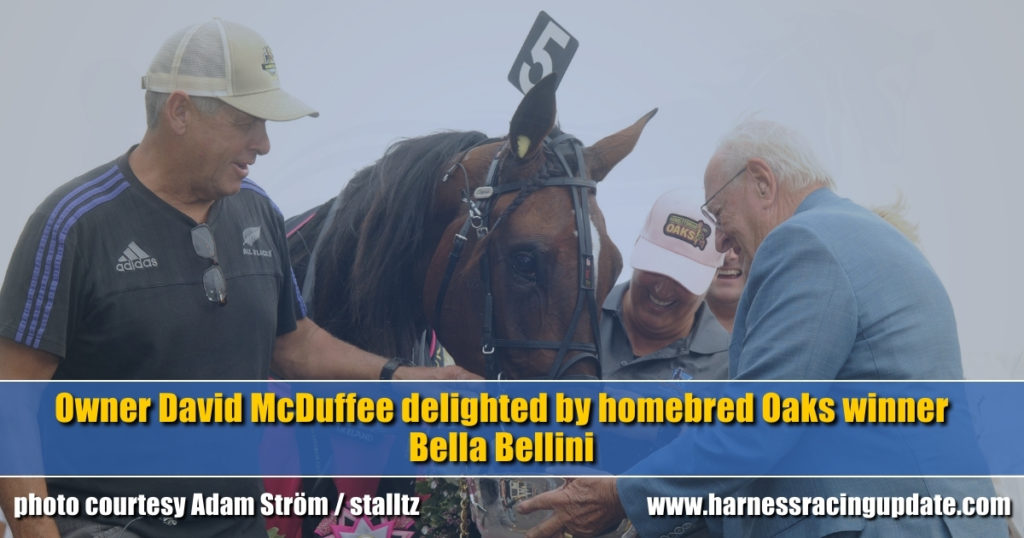 Owner David McDuffee is delighted his homebred Bella Bellini — part of a third generation of trotters he’s bred — rebounded from a winless freshman campaign to win the $500,000 Hambletonian Oaks.

Even when Bella Bellini went 0-for-7 as a 2-year-old, owner David McDuffee kept the faith.

“She was a good filly last year, she just hadn’t put it all together, but I knew she’d be a good filly,” said McDuffee.

His patience certainly paid off as his homebred miss by Bar Hopping out of Bella Dolce won the $500,000 Hambletonian Oaks on Saturday (Aug. 7) at The Meadowlands by 2 ½ lengths over Iteration. Contested Hanover was third.

With the Oaks win, Bella Bellini pushed her career earnings to $386,983.

“I’ve had great luck with that family,” he said. “I had Pizza Dolce, then her daughter, Bella Dolce. And I’m kind of driven towards the same family. If you watch a lot of my purchases, I like pretty much the line I like.”

On McDuffee and partners also won the Jim Doherty Memorial for 2-year-old trotting fillies with Venerable. The owner won his first Oaks in 2013 as co-owner of Bee A Magician, but Bella Bellini’s Oaks win was a little more special.

“It’s like having one of your kids win a World Series game,” said McDuffee. “The family has all been really good to me. [Pizza Dolce] was so special. One of my best friends in this business, Carter Duer, who I admire, said to me after Pizza Dolce won the Bluegrass down in Kentucky as a 2-year-old — after making a break and being 25 lengths behind when the race started — he said, ‘Mr. McDuffee, I have been in this business 50 years and I don’t know that I’ve ever seen anything better than that. That meant a lot to me.’”

“I wasn’t sure she would,” said Norman. “But one thing she always had was high speed. That’s a talent you’ve got to have. It was up to Dave really. He decided to press on.”

This was Norman’s third Oaks win and a first for driver Dexter Dunn.

For caretaker Stephanie Petherick, this win stands out because she also took care of Bella Dolce.

“I had [Bella Bellini’s] mom from start to finish, so it’s pretty exciting to be able to take care of her daughter and do so well with her,” said Petherick. “It’s funny, out of all her foals, this one looks identical to her. We actually have a side-by-side photo of the both of them and other than the marking — Bella Dolce’s marking is just a little bit longer — other than that they’re both the same. They act the same. She’s just so kind. I have two young kids and she’s the sweetest to them.”

Petherick was also the caretaker of U.S. and Canadian Horse of the Year Bee A Magician.

“Out of all of my horses, Bee A Magician was the biggest handful that I had. She was a tough one. She had her quirks in the barn and on the track. [Bella Bellini] is a walk in the park compared to her.”

It could be déjà vu all over again for McDuffee next year with homebred filly Agro Dolce, a 2-year-old half-sister to Bella Bellini by Cantab Hall who is 0-for-3 so far this season.

“And she’s not going to make any money this year,” said McDuffee. “I’m going to keep her and I’m pretty sure she’ll be good next year. So, we’ll keep it going for a while longer. Maybe I can have a fourth generation. Wouldn’t that be neat?”