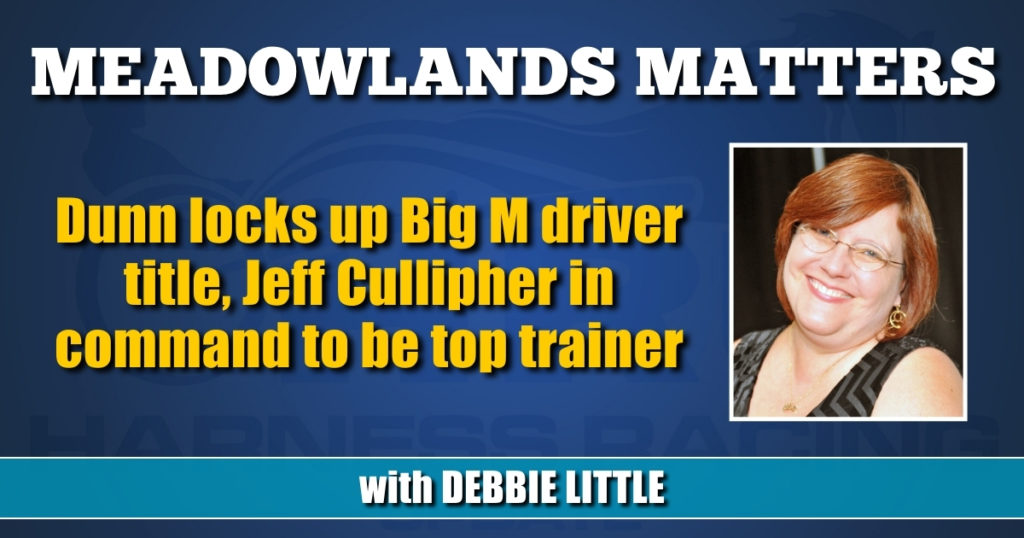 The Meadowlands’ Winter-Spring-Championship Meeting comes to a close on Hambletonian Day, so it’s time to hand out the hardware to the top driver, owner and trainer at the track.

Dexter Dunn has locked up the driving category, as have the owning tandem of Tom Pollack’s Pollack Racing LLC and Jeff Cullipher.

The race for trainer is close, and although it’s still mathematically possible for Ron Burke to overtake Cullipher, who holds a seven-win lead, it’s unlikely to happen with just two days left in the meet.

For Dunn, this victory is a bit of redemption, since he had the lead going into Hambletonian weekend last year, only to get caught and passed by Yannick Gingras, who bested Dunn, 86-85.

“I had a good lead last year and I blew it, so it’ll be good to hold onto it this year,” said Dunn. “It’s definitely good to win a Meadowlands’ title. It’s going to be up on the list of my achievements. It’s a cool thing.”

Dunn currently has 120 wins, 37 better than Andy McCarthy in second and 38 more than Gingras, who’s in third.

Dunn won seven races on two occasions this season, which is just one shy of the track record co-held by Mike Lachance and Brett Miller. On one of those nights, Dunn won all but four of the 11 races in the Kindergarten Classic Series.

Dunn’s $2.1 million in Big M driver earnings is currently tops, but with so many high-ticketed races this weekend, that could change.

The formidable team of Pollack and Cullipher have earned a natural hat trick as the meet’s top owners, even though their accomplishment will not be recognized on Hambletonian Day, since the new system used by the horsemen’s bookkeeper no longer has that report option.

“It’s more so for me to see Tom get recognized and I guess now he’s not,” said Cullipher. “That’s the great part about The Meadowlands, they always did it and obviously without the owners there would be no trainers.”

Since Cullipher doesn’t train for anyone else, his current total of 53 wins are without question the most for any owner at The Meadowlands this season.

Even without the software to do so, it is possible to go through the 61 days of racing and compile a list by hand of winning owners, and when examining that list, not even Burke comes close since he does not own a piece of all the horses that make up his 46 training victories.

“I always felt even though we were somewhat on the map before, I always felt like it hasn’t been until this year that we’ve broken through out there and they kind of really know who we are now,” said Pollack. “Whereas the other years they were like, ‘Who are these two guys?’”

Even though Pollack and Cullipher were not able to be in the winner’s circle for all their victories, Pollack has a standing order with Lisa Photo to send him every win photo.

“I’m happy to support them and they take unbelievable shots for sure,” said Pollack. “My wife probably sometimes gets sick of all the pictures coming. Like what are you going to do with them? It’s just good karma and these guys are out there and they take great pictures. And one day I’ll probably look at these albums and look back and be like, I remember that.”

Even though the training stats are in his favor, Cullipher doesn’t want to think too much about winning his first Big M training title until it’s a done deal.

“It would be awesome,” said Cullipher. “I could never have imagined something like that. But I am only seven up and if anybody could catch me, [Burke’s] the person that could knock off seven on the weekend, so I don’t want to jinx myself. If it’s meant to be, it’ll be.”

Pollack/Cullipher opened a stable in New Jersey in late 2018 headed by Rico Robinson, and that combination has proved to be a winning one.

“He’s tremendous and I couldn’t be happier he’s on the team without a doubt,” said Pollack. “You’ve got to give [Shannon] Murph [Murphy, who manages Burke’s New Jersey stable] and Rico a lot of credit because they’re the boots on the ground, and without them, it’s not happening, either.”

Burke has won nine straight titles involving the Big M Championship Meet and thinks the last time he went into Hambletonian weekend without the lead was 2011 or 2012.

Burke doesn’t race in nearly as many overnight races at The Meadowlands these days, choosing instead to focus more on stakes horses.

“Jeff has kind of taken that role over, being the biggest racehorse barn, so good for him,” said Burke. “I hate to lose, but I’ll gear up a little bit better next year.”

Throughout the month of January, Burke had the lead, but on Jan. 30, Cullipher went up by one and has kept a head in front ever since.

On July 17, Burke pulled to within four, and at that point, Pollack thought they would be going head-to-head, nose-to-nose for the lead. But since that night, Burke has not recorded a single winner at the track.

“Just the last couple of weeks they haven’t had the best of luck and we’ve been fortunate to win a couple or it might have been one or two going into this weekend,” said Pollack. “Ronnie’s going to be a Hall of Famer and I’d put [owner] Mark [Weaver] in the same category. I learned a lot from them and it’s an honor to even be in this competition with them for sure at the greatest track in the country.”

Pollack is friends with both Burke and Weaver, who only live about 15 minutes away from him in Pennsylvania.

“He’s picked up stuff from us and honestly now I see things that they do and I say to Mark, ‘Maybe we should be doing that too,’” said Burke. “Tommy is a very intelligent guy. I’m not going to make excuses. They did well and they won races. There are no bad feelings. Of course, I don’t want to lose and, of course, I’ll try to take it back next year.

“Hopefully, we’ll have a good weekend this weekend and make him sweat a little bit, but seven is too many.”

Burke, who currently leads all Meadowlands’ trainers with over $1.6 million in earnings, is racing a total of 20 horses on Hambletonian Day, but in the previous three years he’s never won more than two on any of those cards even though he’s started 17, 22 and 17, respectively. And throughout the year, neither Burke nor Cullipher have won more than four races on any card.

The leading trainer and driver will be honored after the 16th and final race of the Hambletonian Day card.