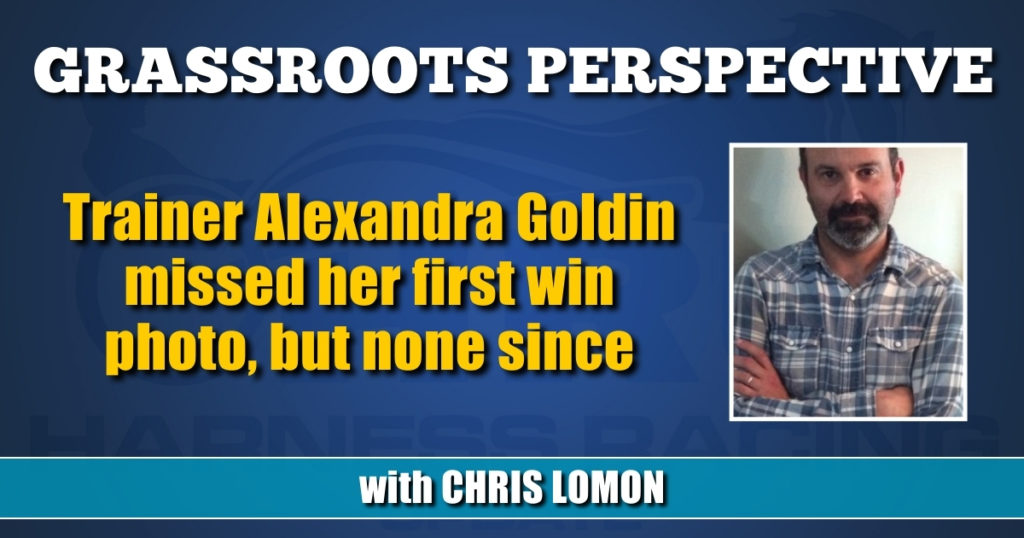 Trainer Alexandra Goldin missed her first win photo, but none since

There will always be something, or more specifically, someone, missing from Alexandra Goldin’s first win photo.

She had always hoped it would be a picture-perfect moment, the one where she would be seen beaming beside her winning standardbred, perhaps alongside some family and friends.

But that’s not how the milestone victory came into focus. Not by a longshot.

Although the photo was a crystal-clear image, Goldin was a bit of a blur during and after the race.

As the field charged towards the wire at Freehold on the night of Feb. 26, 2016, the young trainer was putting in some serious footwork of her own, making a mad dash to catch a glimpse of Shasham, the horse she co-owned with her brother.

While Shasham, a grey pacing daughter of Threefold, succeeded on making it to the winner’s circle, Goldin, who was working for top-tier trainer Chris Ryder at the time, wasn’t quite so fortunate, missing out on the race and post-race festivities.

“We had one to qualify, and Chris told me it was at Freehold. It was my first time driving the truck and trailer, so I was already nervous. I was driving very slowly because I remember so many people going around me consistently. We did very well in our qualifier, and I rushed back to my car. The one spot people always get stuck at, that was the moment she crossed the wire. It was a close win. She has an underbite, like a parrot mouth, so we all joked that she won by a parrot mouth. But I didn’t see the race. I was running as fast I could and I ended up just missing it. So, I wasn’t even in my first win picture. But I’ll always have a great story to share for my first win.”

Thankfully, the native of Westfield, NJ hasn’t missed out on any other notable moments in her career, and she certainly hasn’t been absent from any win photos since then.

Holding the reins of a small stable – she currently has three horses under her tutelage – Goldin has found success despite having launched her career only five years ago.

In 2018, she notched a cherished victory when So Take That, a son of Camluck, sprung a 16-1 upset at The Meadowlands, giving Goldin her first win at the iconic racetrack.

“He also gave me my first driving win (she’s been driving for nearly seven years) and we held the track record at Frederick Fair. I would say he was the main horse who launched my career. People started noticing me with So Take That because he was a claimer, he had some issues and I did right by him. He really came back and raced very well.”

Fast forward to this year, and Goldin is on track to set career-best numbers in wins and purse earnings.

Highlights from 2021 include Cheyenne Ryan Lee, a 5-year-old son of Roll With Joe, who rolled to victory at Monticello on July 13. One night later, she sent out Drazzmatazz, an 8-year-old trotting son of RC Royalty, to his 25th career triumph, a 1.56 effort at Yonkers.

Goldin, who is hoping for more of those nights, prefers to look down the road rather than right in front of her when it comes to her personal goals.

“I think any trainer would say they want to win the Hambo or the Breeders Crown. I’d be lying if I said I didn’t want to win one of those. Short term, I don’t think you can really have a short-term goal in this sport. It’s a lot of dedication and time, and success doesn’t happen overnight. You have to really be dedicated and passionate about it. If I had to look at things in the short term, I would like to have more horses. I would like to have five. That way you could work with them individually and have time for each one, for whatever they need. I think five would be the ideal number.”

When Goldin isn’t at the racetrack, she can be found playing sports or hanging out with her two dogs, Buddy, a seven-month-old bull terrier, and PJ, a bull terrier / pit bull mix, who she rescued eight years ago.

On this day, Goldin is, of all things, painting her mother’s bathroom.

Although it doesn’t top her list of off-track pursuits, simply having time for personal time is something she cherishes.

“I enjoy hanging out with my friends, but even getting that opportunity is few and far between. There are a lot of sacrifices in this sport, but that comes with the territory.”

Goldin has been somewhat of a road warrior of late, driving to various venues for weddings that had been delayed due to the pandemic.

And unlike that night five years go at Freehold, she’s managed to be seen in photos, plenty of them, in fact.

“This year was the first year I can really remember making time to do things because COVID really put a damper on so much. Everybody that had their wedding planned before the pandemic and even now, they all seemed to happen at once, one right after the other. I’m thankful that I did go. I know people were really surprised to see me because I’m usually racing or can’t find the time to get away. People will often ask me, ‘Do you ever stop?’ I tell them that there’s no ‘turn off’ button.”

But that suits the young trainer just fine.

Working with the horses has and always be a genuine source of happiness for Goldin.

She’s hopeful other up-and-coming trainers forge that same connection and that they are open to plotting out their own path to success.

“The business has changed immensely and it’s hard to emulate the great trainers of the past. Try not to compare yourself to others but improve upon yourself.”

As she works to build her resume and reputation, she’ll also continue to draw upon some helpful words Ryder once shared with her.

“Chris always told me to never be afraid to try things, no matter what it is. We had a trotter that was really giving us a hard time. He asked me to get some hobbles and I thought it would be trotting hobbles. He said, ‘No, no, no… go get the pacing hobbles.’ I was a little confused at first. I put them on, criss-crossed them, and went out and did a mile. Next thing I know the horse is qualified and went on to win five straight races. So, after that, I really embraced that idea of trying something new or different, thinking outside the box. You never want to miss out on something because you weren’t willing to try.”

It’s something Goldin is no doubt familiar with.