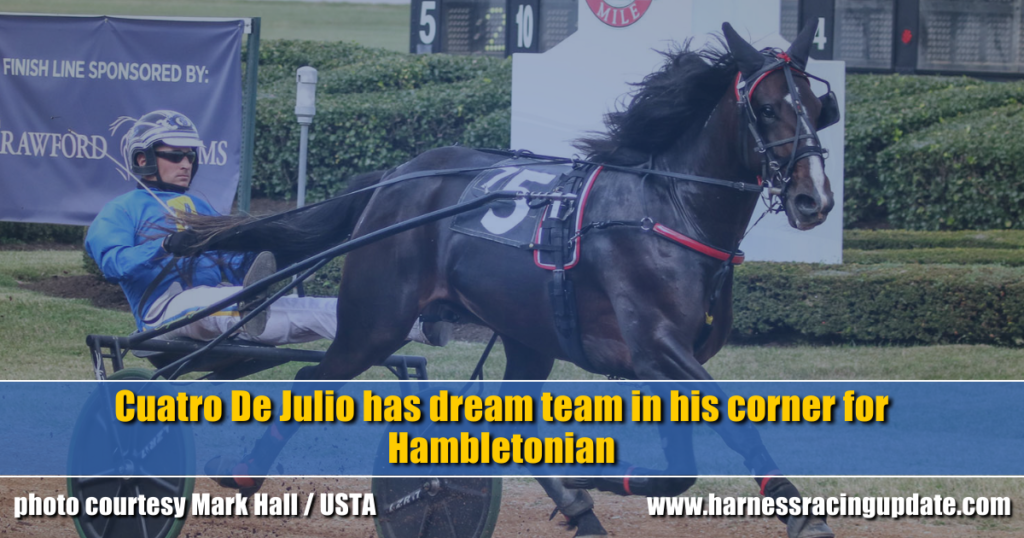 Cuatro De Julio has dream team in his corner

The Hambletonian finalist is trained by Marie Ortolan Bar, who oversees famed French horseman Jean Pierre Dubois’ breeding farm in Kentucky. She has overcome a range of challenges to get to this moment.

Dubois’ Dream With Me Stable bred Cuatro De Julio, which translates to Fourth of July, Dubois’ birthday, and is owned by Dubois’ Dream Farm LLC.

Michael Lisa | Lucas Wallin will drive Cuatro De Julio in the Hambletonian as he did earlier this year at The Meadowlands (above).

Mark Hall / USTA | Louis Baudron, Jean Pierre Dubois’ grandson, would have been Cuatro De Julio’s driver for 2021 (as he was on Oct. 9, 2020 in Lexington, above), but because of COVID-19 restrictions, was unable to return to the U.S. from France as expected.

Louis Baudron, Dubois’ grandson, would have been Cuatro De Julio’s driver for 2021, but because of COVID-19 restrictions, was unable to return to the U.S. from France as expected.

Lucas Wallin was asked to join the team because Ortolan Bar saw so many positive qualities in him.

“The best for us is a guy that trains and drives, because when you train them, you know them,” said Ortolan Bar. “He has a good soul and he’s smart and passionate and he knows what he’s talking about. Lucas has a lot of talent and my prediction is we will see him win a Hambletonian in the next couple of years [with one of his own].”

Wallin moved to the U.S. from Sweden seven years ago, and after working for Ake Svanstedt for three years, has been on his own for the last four.

“I don’t really know why they asked me [to drive Cuatro De Julio] but I was very happy,” said Wallin. “It’s been a pleasure and it’s been a very good experience for me to drive a horse like him, so I’m very thankful.”

There was a brief question mark as to who would drive Cuatro De Julio in the Hambletonian final, since Baudron is expected to arrive in the States on Thursday. But after a conversation between Baudron and Wallin on Monday morning, Wallin will keep the drive.

“Louis will try to come, but he decided that Lucas knows the horse now and it is better to let Lucas drive,” said Ortolan Bar.

Wallin has previously trained three Oaks starters, but this is his first time in the Hambletonian.

“I’m super happy,” said Wallin. “Of course, we could be a little bit happier after the draw, but it is what it is. We have a good enough horse so we’re going into the race very confident.”

Even though post 10 is not the best starting point for the Hambletonian, Team Cuatro is happy with how well their son of Hambletonian champion Trixton raced in his elimination, finishing second wearing brand-new shoes.

Wallin had suggested they try Swedish Mushroom Shoes and Ortolan Bar and Dubois thought it was a good idea.

“When I tried the horse with these shoes, he was not the same,” said Ortolan Bar. “I don’t recognize my horse. He took the lines and he wanted to go.”

Dubois reminded Ortolan Bar that Cuatro’s mother, Clarabelle, a daughter of Ready Cash, wore the same shoes and if they did not use them she would not trot.

“Mushroom shoes are very good for the coffin joints but they are not good for the ankle,” said Ortolan Bar. “You can fix one problem but develop another one, so we have to remove the shoes after the Hambletonian.”

From the time Cuatro De Julio was a few months old, Ortolan Bar knew he was different and special. When he was only nine months old, she told her friends that Cuatro would be her Hambletonian horse.

One of the people who remembers her saying it is Hall of Famer Mike Lachance. Dubois and Lachance are good friends, so Lachance has known Ortolan Bar for quite a while now.

“She told me when he was a baby,” said Lachance. “She used to call me every month or two telling me how good he was doing. I used to tell her keep saying it [about the Hambletonian] but not to too many people, and she would laugh. It’s just unbelievable. I’m so happy for her. I’ll be cheering for her the whole time because I know how much it means for her.”

Ortolan Bar believes that Cuatro De Julio is a gift from God and that he came into her life to show her that faith is important. She runs Dubois’ breeding farm in Kentucky, but without Cuatro she would not have a current driver’s or trainer’s license.

For over a decade, Ortolan Bar has dealt with more than her fair share of health issues, including a rare congenital heart defect known as Ebstein’s anomaly, as well as blood clots, cancer and two near-death and out-of-body experiences.

To see her work with Cuatro De Julio, you could not tell the toll that her life-long maladies have taken on her, but that is why she surrounds herself with people who can help her when she needs it.

Francois Jamier, Al and Lee Eferstein and Judy Magie have also played a part in getting Cuatro De Julio to this moment. Ake and Sarah Svanstedt have also been very accommodating at Legend Farm.

“I don’t train this horse alone,” said Ortolan Bar. “I have a lot of people around me. I’m just the one that can find the people that can be smart enough to make it work. That can make it possible. All things are possible with faith.”

From the Kentucky fairs to the Hambletonian is already quite a story. On Saturday, we will find out how this chapter ends.