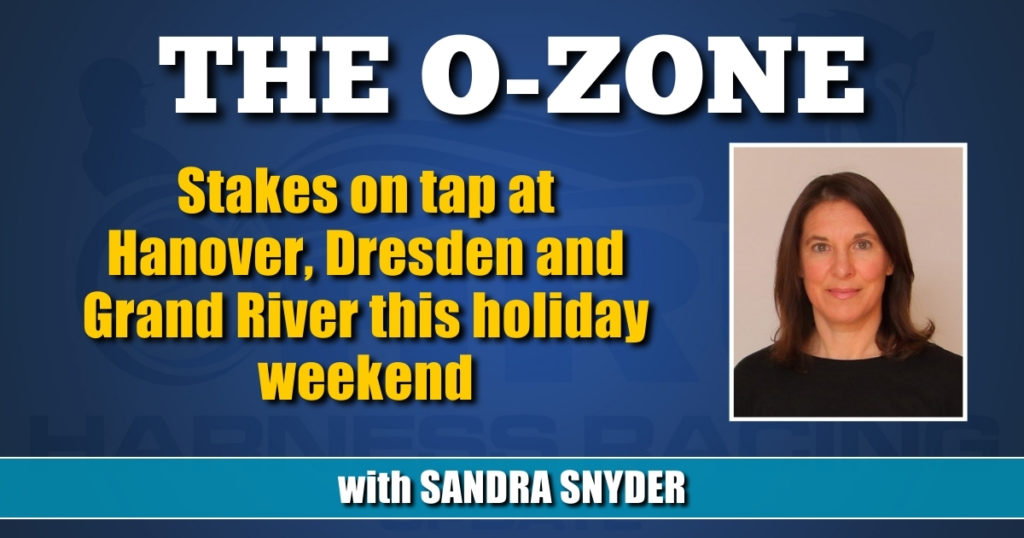 Stakes on tap at Hanover, Dresden and Grand River this holiday weekend

Ontario’s Civic Holiday weekend is celebrated in racing by Hanover Raceway’s Dream Of Glory on Saturday, the inaugural Black Heritage Day on Sunday at Dresden and the Battle of Waterloo on Monday at Grand River.

The Civic Holiday weekend is always a significant one on the Ontario harness racing calendar, but with fans back in the grandstand and on the tarmac, this year’s events have a heightened celebratory feel.

Kadabra son Sweet Soul David heads into the event as the reigning Balanced Image champion and could become just the second horse to claim both of Hanover Raceway’s marquee events, joining Traverse Seelster (Angus Hall) who accomplished the feat in 2010 and 2011. Owned by trainer Paul Lang of Ancaster, Simon Swindells of Little Britain, Garth Bechtel of Meaford and Paul Kleinpaste of Orangeville, ON, Sweet Soul David will be putting his three-race win streak up against the four-race streak Tipsy In Dixie has amassed for trainer Harry Poulton and owners TheStable.ca Tipsy In Dixie of Guelph, ON.

“Being a Hanover Raceway board member when this race was conceived, I am very proud of how our industry has received and supported this race over the years,” said trainer Mark Etsell, who sends Top Of The Bar out from Post 7 in this year’s edition. “This is a great race for Ontario-breds.”

Programs, live stream and the registration link for in-person attendance are all available on Hanover Raceway’s website https://hanoverraceway.com/.

On Sunday, Aug. 1 Dresden Raceway will present its first Black Heritage Day, honouring both abolitionist Josiah Henson, who owned the land where the racetrack is situated during the mid-1800s, and the many Black families who have contributed to the racetrack’s success over the years.

“There’s going to be a lot of stories and a lot of camaraderie that day,” said general manager Gary Patterson, adding that Dresden Raceway hopes to make the event an annual occurrence. “We’re going to have a static display at the racetrack, it’s going to be full-time at the racetrack, but we’re hoping to have the Josiah Henson Pace every year and then we can draw attention to the static display and draw attention to these families and what they’ve done for the races.”

Seventy-nine year old Fred List and his family will be among the people sharing stories and fellowship with fans and their fellow horsepeople.

“There’s five generations of my family that used to race horses. My dad, Harry List, he could drive a horse as good as anybody,” said List, who currently calls Hamilton, ON home. “He could almost talk to horses my dad, and he always drove the ones that nobody else would touch. He used to drive a mare, Alice G, and they always had to take two or three sulkies with them. She’d kick the wheels off all the sulkies. My dad used to bring a mickey of whiskey with him and he’d say, ‘Now you’re going to behave old girl today,’ and he’d walk up and he would put the mickey of whiskey in her mouth and she’d drink half of it and he’d drink the other half and jump on the cart and away they’d go and win races.

“We had a lot of fun back years ago. Don’t get me talking because I could talk for two days and I could tell you stories and never tell you the same one twice.”

Standardbred Canada credits List with 1,081 wins and $1,473,558 in earnings as a driver and 71 wins and $251,003 in earnings as a trainer, but the vast majority of his work was complete before the current record keeping system was introduced. After leaving home at 16 he travelled all over Ontario, Quebec and the northeastern United States second training for noted horsemen such as Dr. John Findley and Donnie Hall, training his own stable and catch driving. Among the horses that stand out in his memory are Skeeter Herbert (Springfield–Tamcee Herbert, $387,402, 1:57.3), Thamesview Blaze (Blaze Pick–Thamesview Cindy, $223,868, 1:59.3) and New Departure (Zip Tar–Miss Blazette, $323,699, 1:58).

He has fond memories of most of the biggest names in the game, both human and equine, and still follows the sport intently, putting Dexter Dunn at the top of the list of current drivers he admires.

List encountered racism in his travels, including in Dresden where restaurants and barbers refused to serve members of the Black community long after the 1944 Ontario Racial Discrimination Act and the 1954 Fair Accommodations Act had made racial discrimination illegal in the province (https://www.tvo.org/article/how-activists-fought-racist-restaurateurs-in-southwestern-ontario), but counts most members of the harness racing community as friends. Since retiring in 1992 he has enjoyed connecting with old friends and competitors at events like Legends Day in Clinton and hopes to see many familiar faces at Dresden Raceway on Sunday.

Programs and a live stream are available on the racetrack’s website, http://dresdenraceway.ca/, and those wishing to attend in person are asked to register by email at dresdenracewayreservations@gmail.com.

While current restrictions will prevent the Elora, ON oval from offering some of the extras that typically occur on Industry Day, general manager Jamie Martin said he and the rest of the Grand River Raceway staff are ready to celebrate the return of fans to their signature event.

“The way I look at it, what’s special is that we’re actually open. Last year for Industry Day we were only allowed 100 people,” said Martin. “We are planning for a really good crowd, so we’re going to try and do the best job we can in meeting those customer’s needs, from a wagering perspective, from a food and beverage perspective. We’re really kind of focussing on, instead of some of those extra things, which might be kind of hard to do in this COVID environment anyway, trying to do the basic things really well so people have a good time while they’re here.”

The racetrack is permitted 50 per cent of normal capacity in their indoor space and 75 per cent capacity outdoors. There will be food trucks and an ice cream truck on hand to augment the track’s food and beverage offerings, which are currently limited to The GrandWay Lounge, and people are welcome to bring their picnics and pop-up tents to set up on the berm in the backstretch, which will be without its usual beverage and wagering tent or grandstand shuttle.

Advance registration is not required, but Martin said if people have their heart set on a specific spot on the backstretch or table in the grandstand, arriving early might be a good idea.

“Fortunately we’ve got a lot of space here so we can accommodate a lot of people,” said Martin. “Now if you want to get ‘your’ spot, you should come early, but I don’t see a scenario where people cannot come in.”

Post time for the Industry Day program is 12:30 pm with the Battle Finals slated as Race 10 and 11, the Gold divisions going postward in Races 3 and 8 and the Grassroots fillies battling in Races 1, 2, 5, 6, 7.

Programs and a live stream are available on the Grand River Raceway website https://grandriverraceway.com/.